The Komodo Chronicles – Part 6 – The Muck, And Nothing But The Muck

When I last made an entry, we were muck diving in Bima Harbour, on the island of Sumbawa. The morning had a shaky start, what with the fish bombing that rocked our world, at least for several minutes.

As I wrote before, fortunately the detonations eventually ceased, and the rest of our dive day was much more peaceful.

Rather than describing the next two dives with words, I thought I would instead share a sampling of some of the really crazy stuff that lives in the muck of Indonesia, and I’ll add some expanded descriptions to give a sense of the size of these critters.

I shot all of the following images during two daytime dives, with a 105mm macro lens, in manual focus, with dual DS 125 strobes.  I am going to share the images in the order that I shot them – hopefully this will give you an idea of what a good muck dive can cough up… 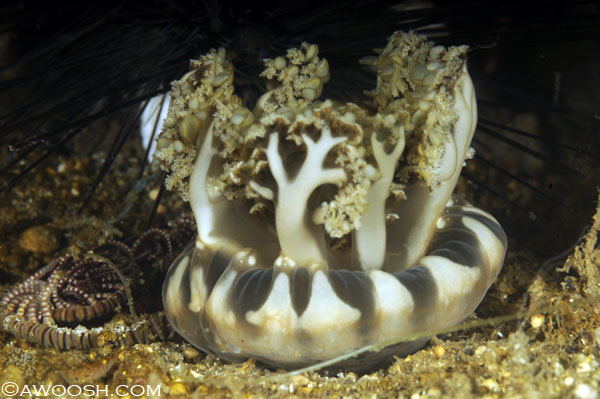 Upside Down Jellyfish – Cassiopea sp.
This thing was about 3 inches across and, mantle side down, just lay on the bottom pulsing. I am used to seeing jellyfish motating through the water column, so at first thought this one might be giving up the ghost… 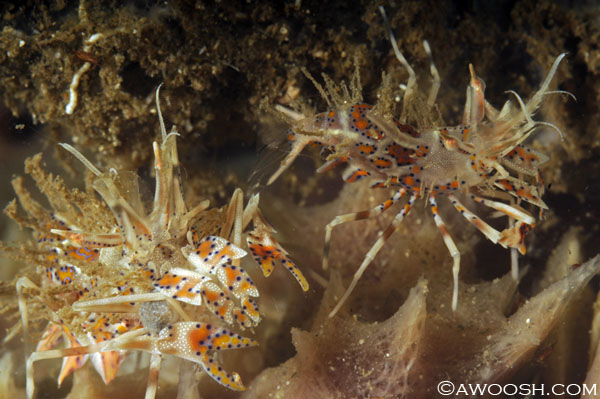 A pair of Spiny Tiger Shrimp – Phyllognathia ceratophthalmus.
Very small – about 3/4 of an inch long. I had seen (and photographed) one Tiger Shrimp previously, in Lembeh. They are not a common subject and we were all pretty excited to have a chance to photograph this pair. 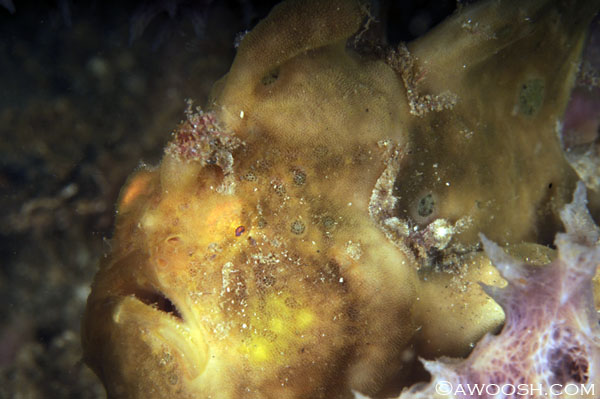 Spotfin Frogfish – Antennarius nummifer
Let the Frogfish Parade Begin. I have never seen so many frogfish on one dive. Crazy…
This froggie was about 3 inches long. 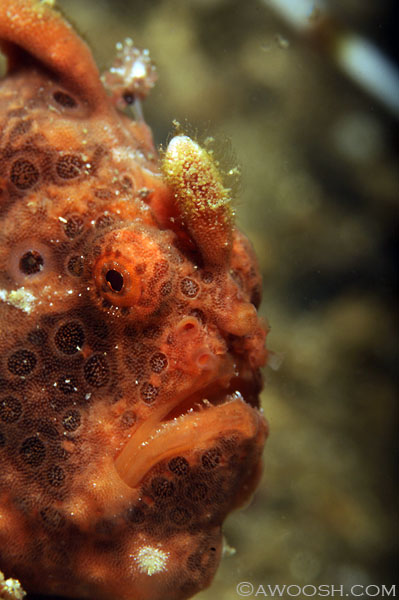 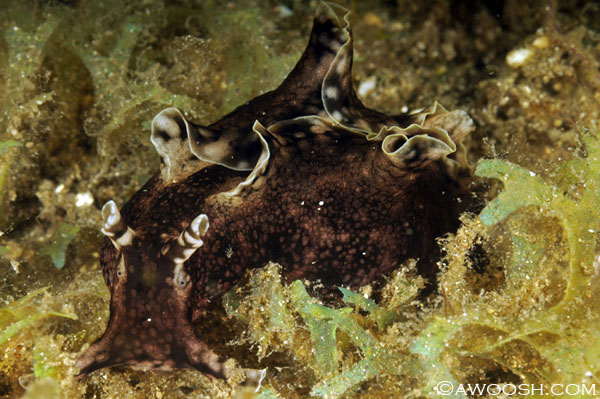 Eyed Sea Hare – Aplysia oculifera
I’ve only seen sea hares in one other location – off the coast of Southern California. Those sea hares were quite a bit larger than this little one, which was about 3 inches long. 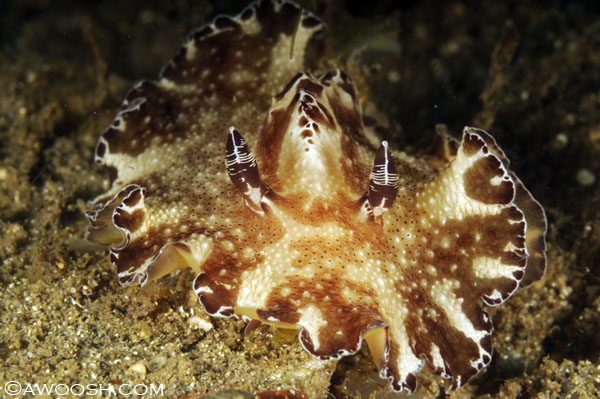 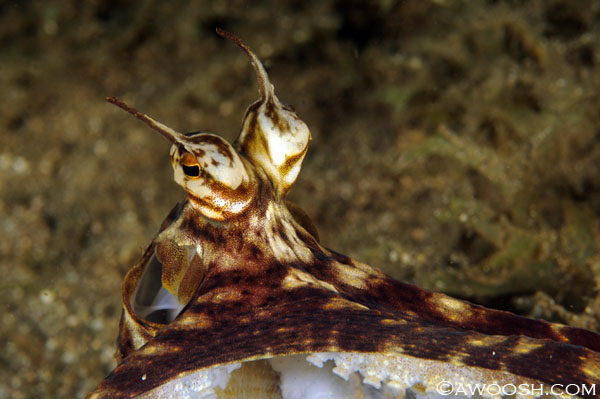 Mimic Octopus – Thaumoctopuys mimicus
I don’t know if this was the same octopus that I photographed at the end of the first, kaboom dive. These octopuses are often very well camouflaged hunkered down in the muck, with just the top of their heads pointing up. It was awesome to see another one out on the reef. Mimics are about 12 inches across, arm tip to arm tip. 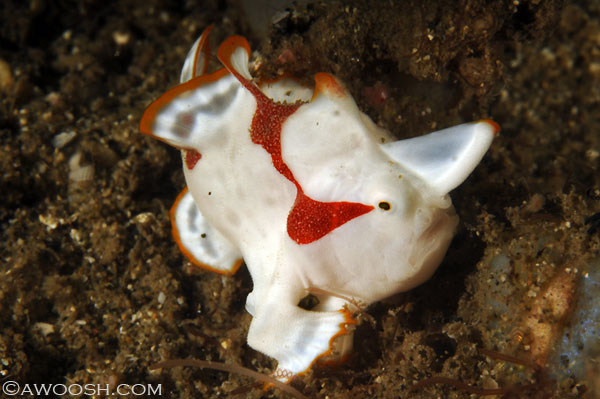 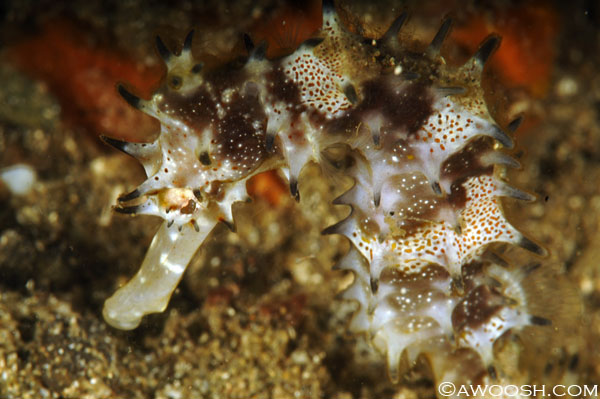 Thorny Seahorse – Hippocampus hystrix
I am going to confess that I feel pretty guilty about photographing seahorses. They seem to really want to avoid the strong light from the strobes. My rule for myself is take not more than 3 pics, and then move on. 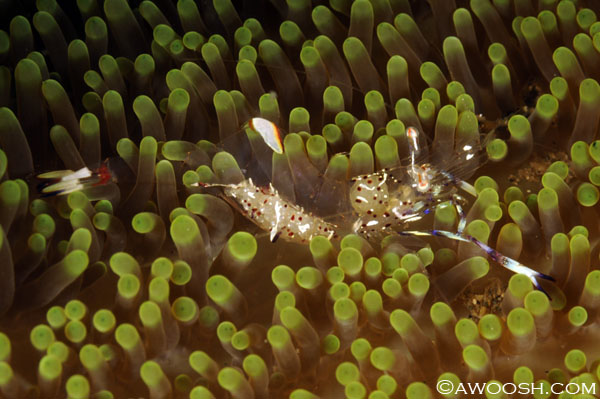 Holthuis’ Anemone Shrimp – Ancylomenes holthuisi
Less than an inch long. It looks to me like this shrimp has an egg mass in its abdomen. 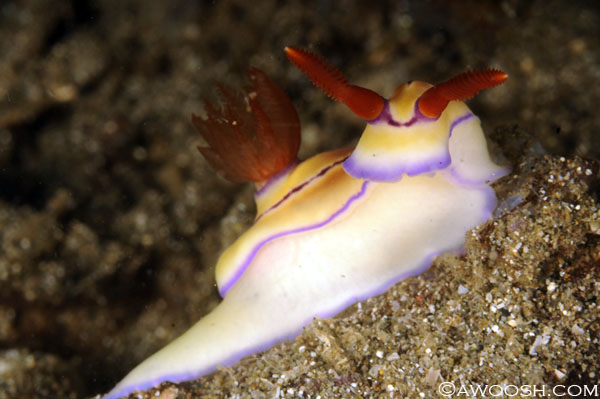 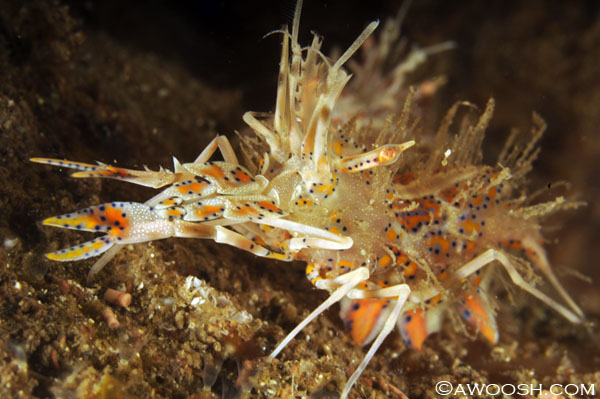 Spiny Tiger Shrimp – Phyllognathia ceratophthalmus
At the beginning of this dive, I had the urge to go back and find the Tiger Shrimps again – such an unusual subject, and I wasn’t confident that my first shot(s) were all that great. When they were found again (a feat in low viz muck), they were no longer nicely teamed up together, so instead I decided to just go for a close up on a single. 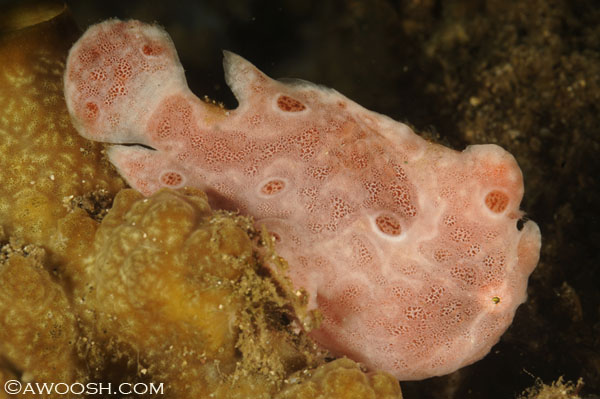 Painted Frogfish – Antennarius pictus
What an amazing diversity of colours with this variety. 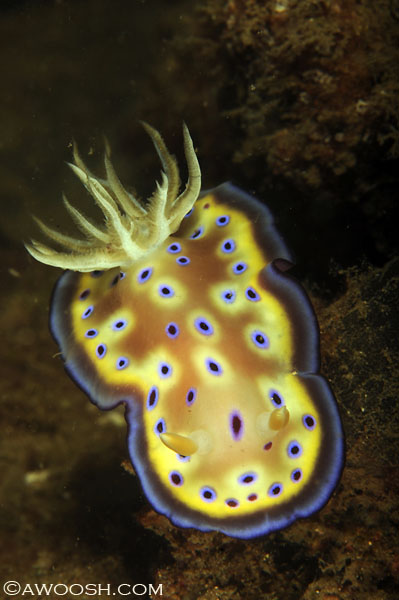 Chromodoris Kunei Nudibranch
This is one of the more common Indo-Pacific nudibranchs – I’ve seen them several times on my travels in Asia. There are also one of the prettiest (at least to me). About an inch and a half long. 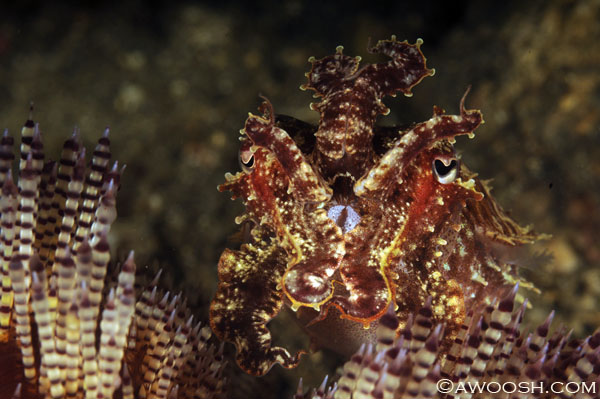 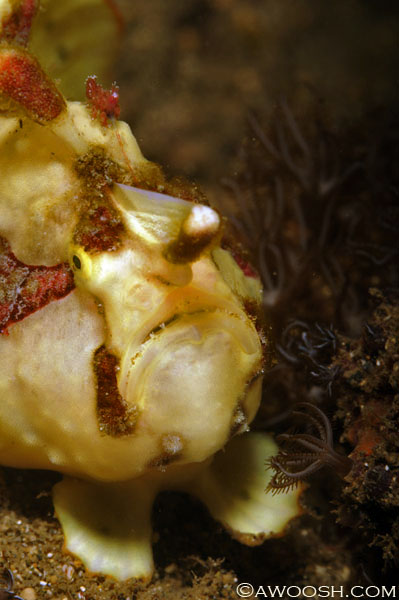 Painted Frogfish – Antennarius pictus
Again with the frogfish. So many in Bima Habour… 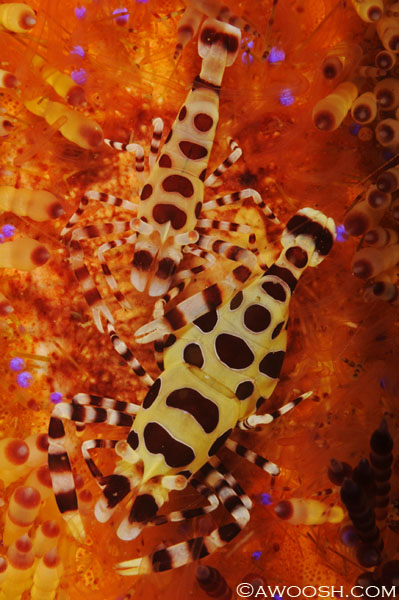 Coleman Shrimp – Perclimenes colemani – 3/4 inch
These shrimps are usually found in pairs – the female is the larger of the two. They clear cut a swath on fire urchins, and make their home there. I must have looked at a hundred urchins before Michael called me over to see this couple that he found. 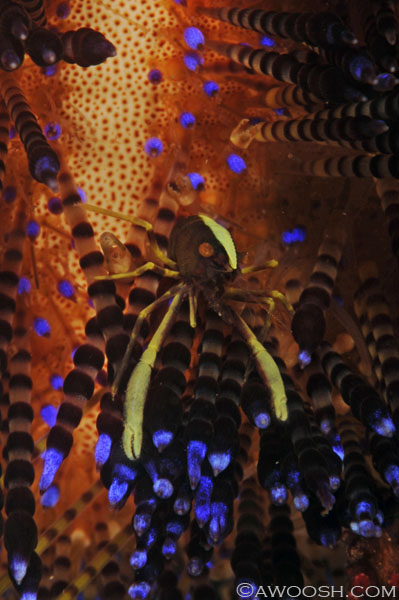 Urchin Shrimp
So, while I was checking out innumerable fire urchins, I found this little shrimp. It resembles the Brooks Urchin Shrimp that are coming up shortly, but the coloration is quite different, and I couldn’t find it in my ID reference book. 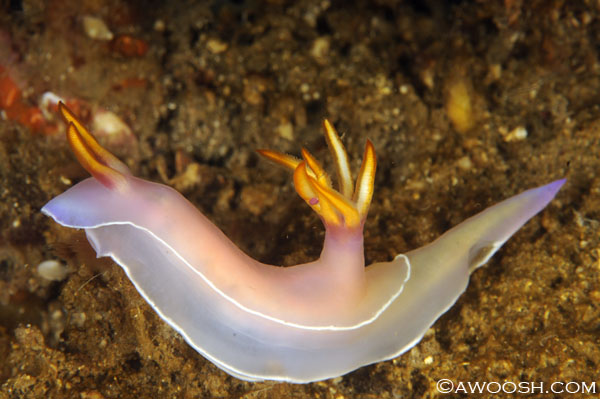 Bullock’s Hypselodoris Nudibranch – Hypselodoris bullocki
This was quite a large nudibranch (the first of this variety that I’ve seen) – about 2 inches long. 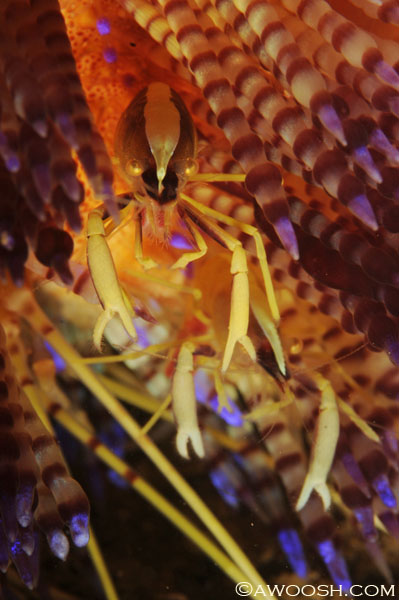 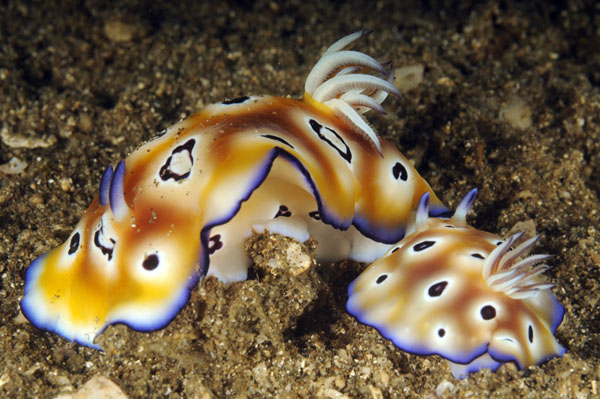 Next up: A night dive in Bima Harbour, and then back to some gorgeous big blue diving…