For this final instalment on the Bali portion of our trip, I am going to share beacoup images, all of which were captured on muck dives near Scuba Seraya Resort.

So, you might be wondering, what the heck is muck diving anyway?  By most divers’ definition, muck dives are dives where the bottom is, well, mucky.  Silty, sandy, garbage strewn – I’ve done all of these, and enjoyed every one.

Muck dives are different than reef dives in that the dominant physical feature is not a beautiful coral garden, but instead is, what appears at first glance, to be a bit of disappointing wasteland.  There may be a few coral outcroppings, or some small bommies, or a cluster of hydroids, or a sponge, but muck diving is generally not pretty, and other than taking pictures of other divers taking pictures of stuff in the muck, there is no good reason to screw on a wide angle lens.

Photographers and keen critter viewers love muck dives because of the population of really weird and wonderful creatures that can be found there.  It is like finding jewels in a sandbox.

Muck dives, because of the soft silty bottom, are also dives with less than stellar visibility. And not great visibility can be totally fooked up by divers who unwittingly lift the silt with their fins, effectively creating a dust storm.

So there are tricks and techniques for diving in muck.  A great prop (both literally and figuratively speaking) is a muck stick – a thin, strong metal stick (usually 12 to 18 inches long), with a lanyard on one end for keeping it on your wrist, and ideally with a clip so you can clip it off to your bc or camera when it is not in use.  I’ve had a few over the years – the first was cobbled together using a large bore knitting needle with a piece of plastic surgical tubing for the wrist strap.  It worked okay, except when I attempted to use it to stay in place on a big current dive, wherein the tip bent like a pretzel, and rendered the thing pretty much useless.  Since then I have been using purchased, stainless steel jobbies.  I’ve lost a couple (when I rolled out of my rig in the water and it got pulled off my wrist by my shoulder strap).  On this last trip, I did exactly that, and as the panga was moving in current, when I swam back down to try to retrieve it, we had already drifted well past the drop zone and I couldn’t locate it.  Fortunately, we dove the same site again in a couple of hours, and Mr G’s and my search pattern located it (I had taken a memory snapshot of the site features and noted the depth so I had a pretty good idea where it might be).  That PADI Advanced course with search and recovery drills finally paid off ;^)

Anyhoo, last year Scuba Diving Magazine contacted me and asked me if I would like to write up the pros of using a muck stick in their “Ask The Expert” column (and they asked another diver to write up the cons).  I was flattered to be called upon in the debate (Who Me, An Expert? ;^), and put together 500 words on the merits of the stick – you can find the piece by following this link.

So here we are, muck stick at the ready, in Bali – specifically the Tulamben region, and here there is some really first class muck diving to be enjoyed.  I wrote in a previous entry in the blog that I wasn’t going to do a resort/dive op review for Scuba Seraya, as I have already written that up extensively (follow the link just above if you are interested).  But I do have to tell you that the resort continues to live up to its fine reputation, and our short visit was made all that much more enjoyable by the excellent company of some great friends with whom we have shared several other adventures.  The great thing about diving with people you know is that there is mutual respect (and tolerance for each other’s peccadillos ;^), and everyone plays nice in the sandbox – sharing subjects, being careful not to silt up other people’s shots, similar air consumption and dive speed.  It was all good…

So here is a compilation of some of my Bali muck diving images for today’s parade of pix: 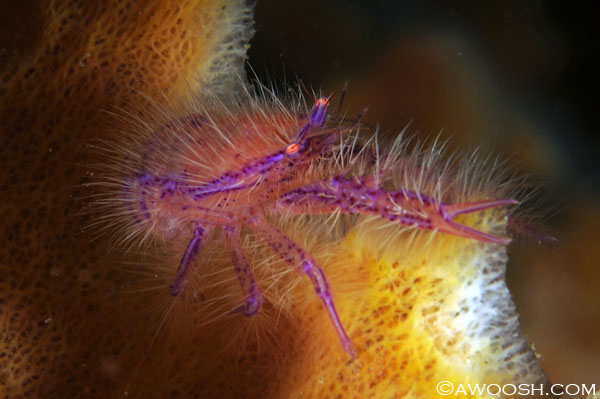 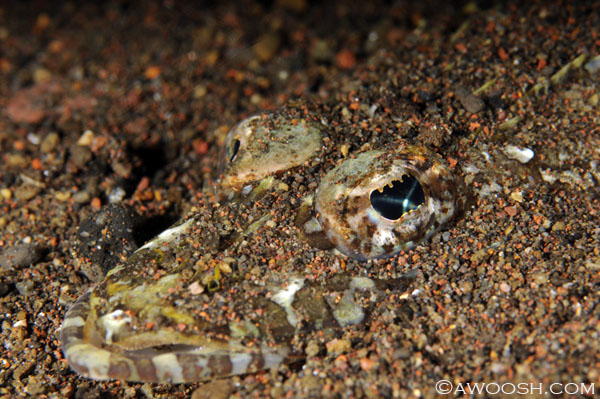 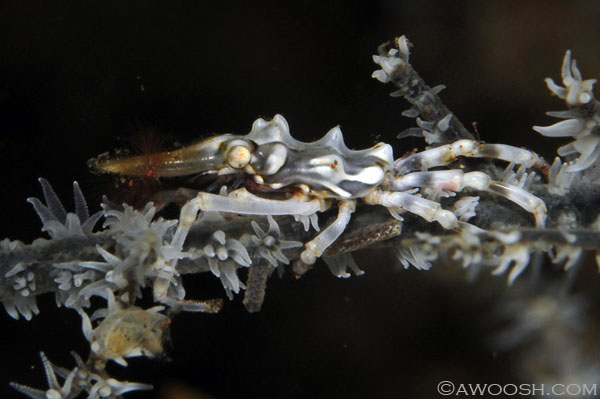 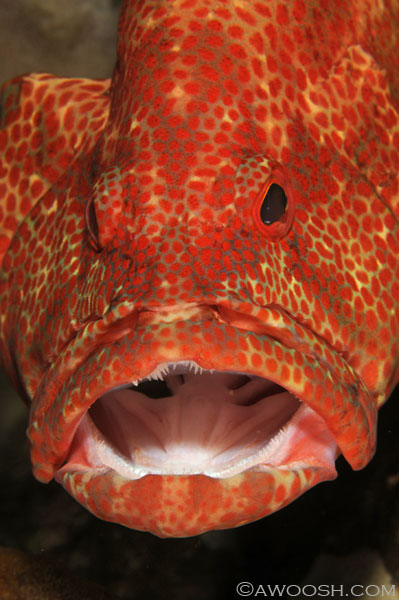 Some sort of grouper – not sure if Flagtail or Strawberry, as I don’t have a shot with the tail in it to confirm identity. The fish is opening its mouth at a cleaner station – inviting the cleaner wrasse and shrimps to jump on in… 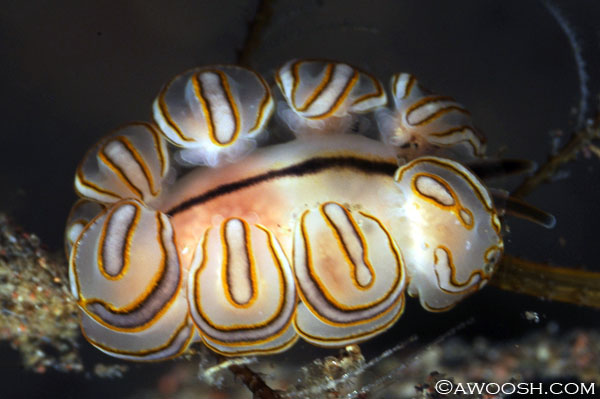 Doto sp 1 Nudibranch. These things are seriously t.i.n.y. This one was about 1/3 of an inch long. 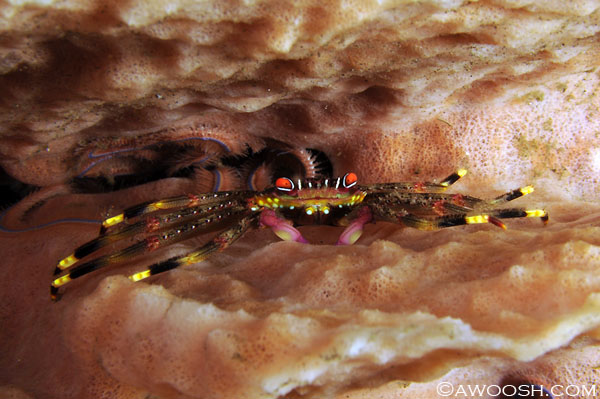 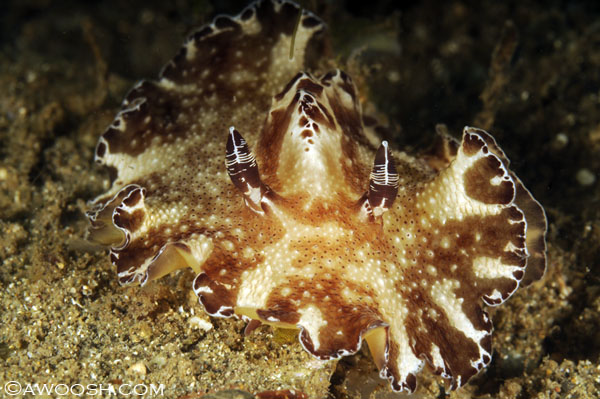 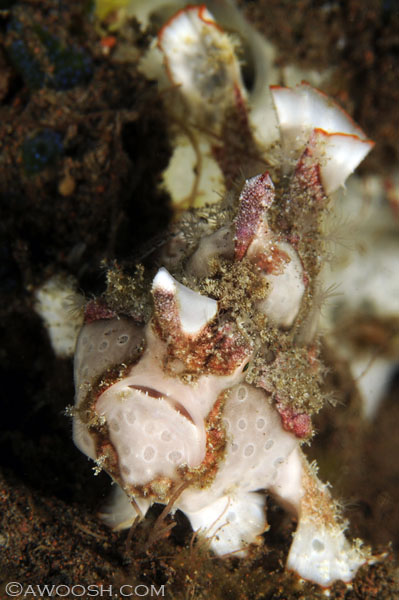 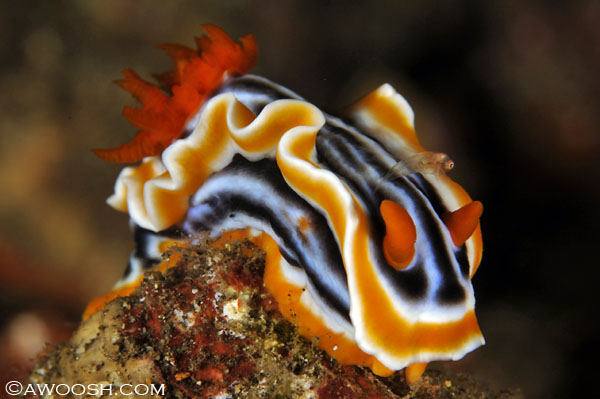 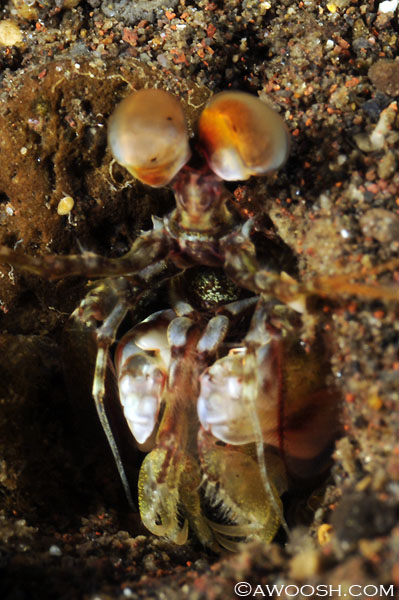 Again, a little sketchy on the identification as only head and a few appendages are visible. My best guess is Short Beak Mantis Shrimp – Odontodactylus brevirostris. I would be happily corrected… 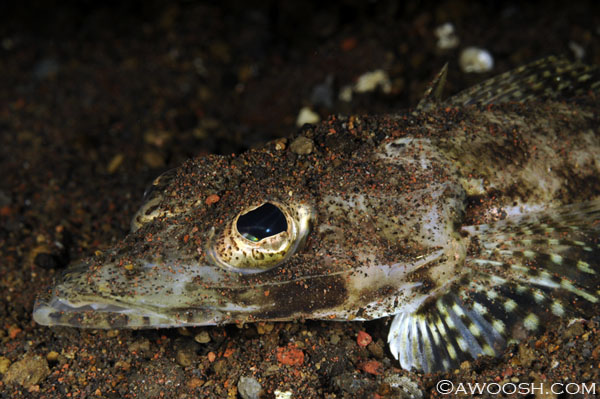 Yet again with the guesswork – a Flathead of some sort. Suggestions very welcome… 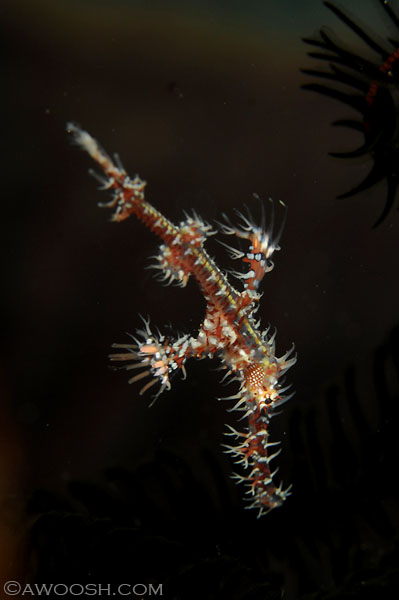 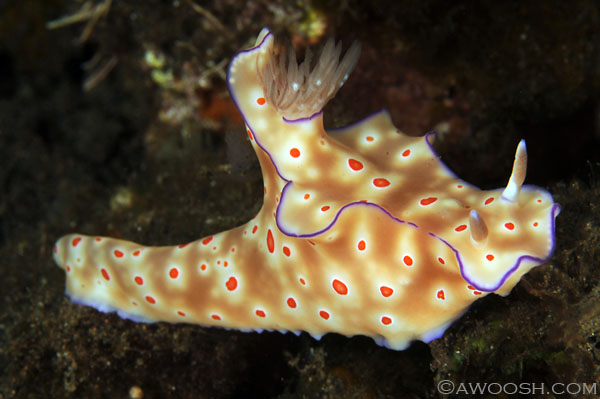 And finally, before we leave Bali, a few land pix of this beautiful island: 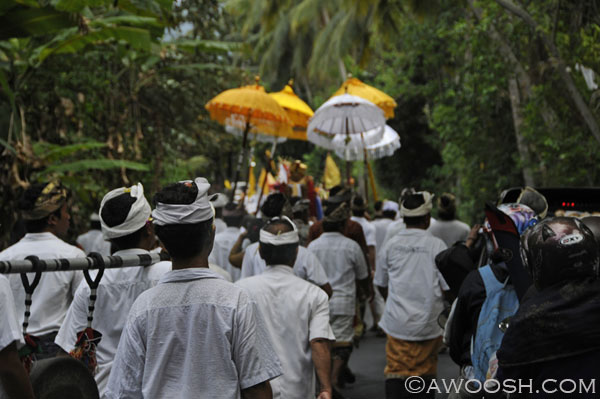 When we arrived in Bali, the roads were a parking lot, as there was some sort of Hindu religious festival taking place, with celebrations all over the island. 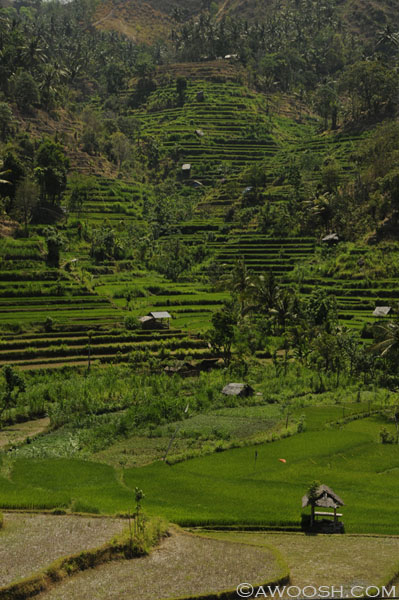 Ubiquitous in Bali – tiered rice paddies carved in to hillsides. 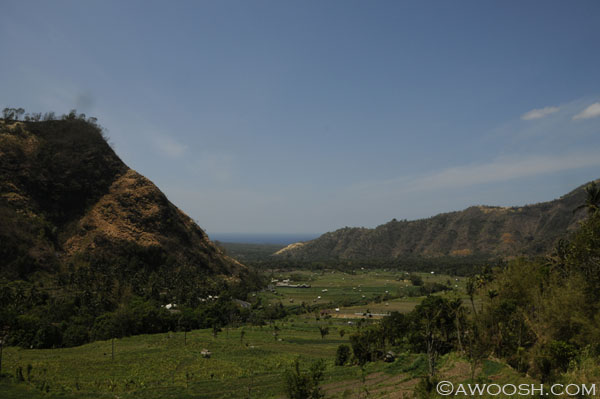 A view back to the sea in the Tulamben area of Bali. 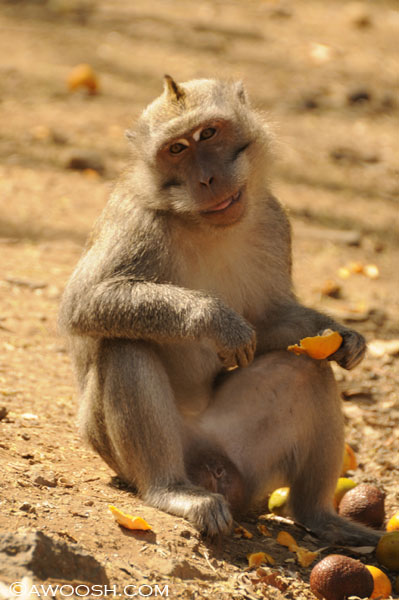 There is such thing as a free lunch! During the festivals, like the one I noted above, people leave beautifully composed fruit and flower offerings for the deities. The monkeys go to town for days afterward to gobble up the goodies…

Next up – we be meeting up with the rest of the buds and we be going to Komodo!

Chapters of the Bali Photo Blog:

Chapter 1 – I Spy With My Little Eye
Chapter 2 – She Shoots, She Scores?
Chapter 3 – Liberty Time
Chapter 4 – Is That A Muck Stick Or Are You Just Happy To See Me?

Born and raised on the west coast of Canada, I have always felt a strong connection to the sea. But for many years, I stayed on the surface, afraid of what lurked down deep. When I was in my early 30's, with three young children (aka the P's), my husband (aka Mr G) signed us up for a SCUBA certification course, as a surprise. Although I had my fears, my stubbornness prevailed, and somehow I made it through four murky, frigid, cold water dives in Vancouver to successfully pass the course. Soon after we went diving off the west coast of Mexico, in the Sea of Cortez, where my eyes were opened to the beauty and other-worldliness of the life down under. And the rest, as they say, is history. I currently have well over 2000 dives under the belt, and I have been fortunate to travel extensively in Asia, Australia, Fiji, Galapagos, Costa Rica, California, the Caribbean, Mexico and here in British Columbia. After shooting hefty DSLRs for many years, I just switched over to a groovy Olympus Micro Four Thirds camera, in a Nauticam housing, with dual Sea & Sea strobes and a bag full of lenses. In addition to this blog and my personal website (Awoosh.com/Directory), which is linked at the top of the blog, my stuff has been widely published in a variety of magazines and websites, including an ongoing regular monthly feature on Scubadiving.com. All links to this work can be found in this blog.
View all posts by Judy G Diver →
This entry was posted in All About Scuba Diving, Indonesia Travel, Trip Reports and tagged Muck Diving, Scuba Seraya, Tulamben. Bookmark the permalink.