So here we are, still anchored in Bima Harbour – at the site of the morning’s rude awakening bomb dive and two more sweet muck dives. There is one more dunk offered this day, a night dive on Fuzzy Bottom – the very same site we explored extensively all day long.

The earlier dives had been very productive in terms of coolio macro subjects, and Michael, our cruise director, opined that the night dive should be pretty epic as well, so I decided to forego the strong temptation of sunset drinky-poos with some of the gang (including Mr G), and instead suited up in a cold and clammy wetsuit to jump in to the black water with the rest of our group’s night diving keeners. The tasty Bintang beer(s) would wait…

A bit about night diving in some of these locations in Indonesia (and elsewhere). In remote locations like we were diving in Komodo National Park, we were often the only boat in view. And as we were diving near some uninhabited (or barely populated) islands, there was no ambient light from nearby settlements. We also had a new moon during our ten day cruise, which meant no moonlight for a few nights either. So some of our dives were very dark indeed. And they were some very buggy dives too – when clouds of little bloodworms, attracted by our underwater flashlights, swarmed our hands and forearms, and even more annoying, got in the way of taking clear images.

The Komodo Dancer liked to drop us in the water fairly early for our night dives, and limit the dives to one hour, so that dinner would not be too delayed for the folks who didn’t choose to dive. That was okay by me – I kind of like dropping in at twilight – it is a little less spooky than descending into an inky sea, especially on sites with poor visibility where the bottom is not viewable from the surface. Also, the bloodworms don’t seem to materialize until it gets very dark.

The downside of twilight diving is that some of the night critters are not yet out, so typically our night dives would be a bit slow on the critter roll call for the first half, and then ramp up for the second, with snake eels out foraging, battalions of crustaceans, nudis spinning egg ribbons, and a whole host of other weird and wonderful stuff. The one hour night dive limit always came too quickly on the dives I did…

So, back to the Fuzzy Bottom night dive. I had shot my Nikon 105mm macro lens for the three daytime muck dives, but I thought I’d give a newish Sigma 17-70mm (bought to replace a dead 28-105mm) a whirl at night. I had only tried out the lens on a few dives on previous trips, and wasn’t totally hooked yet, although it does have an impressively quick autofocus. You can’t go as wide as 17mm with the lens in a macro port (the port cuts off the corners of the image), and it seems counter-intuitive to shoot macro through a dome port, but having fooked around with the lens on a few dives on this trip, I think that is going to be the way to go in the future.

So, the pix. Once again I’ll give scientific names to the stuff I can find in my books (Humann & Deloach), and an idea of the size of things. 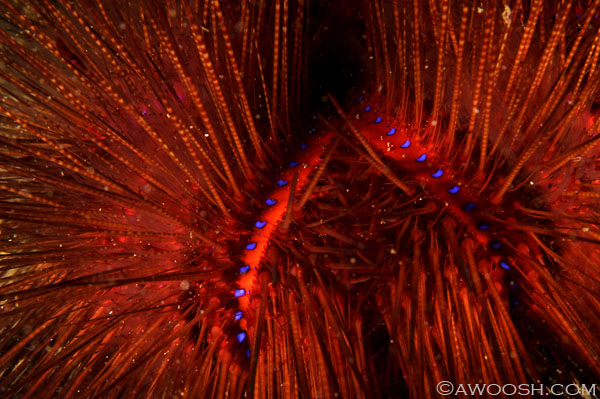 Radiant Sea Urchin – Astropyga radiata
Look, but don’t touch. This urchin will hurt, bigtime. I was captivated by its gorgeous coloration but made sure to keep my distance. About 8 inches across. 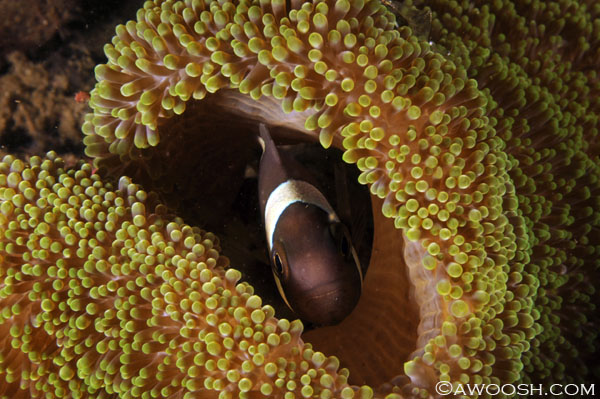 Panda Anemonefish – Amphiprion polymnus
Don’t let that cute little face fool you. This variety of anemone fish is highly territorial and will swim a long way off its host anemone to confront you, especially if there are eggs or babes in the nest. They may be little (max about four inches long), but they pack a kickass punch. 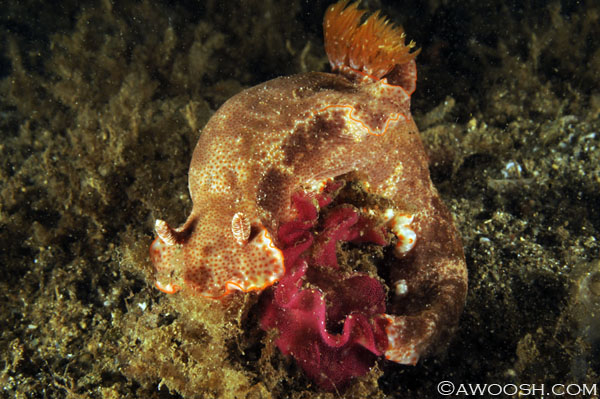 Slender T-Bar Nudibranch – Ceratosoma gracillimum
Laying an egg ribbon. This nudibranch is about 2 inches long. There was also an Emporer Shrimp hitchhiking on its back when I arrived on scene, but it scooted under the nudi, and so I was not able to capture it in the image. Bummer… 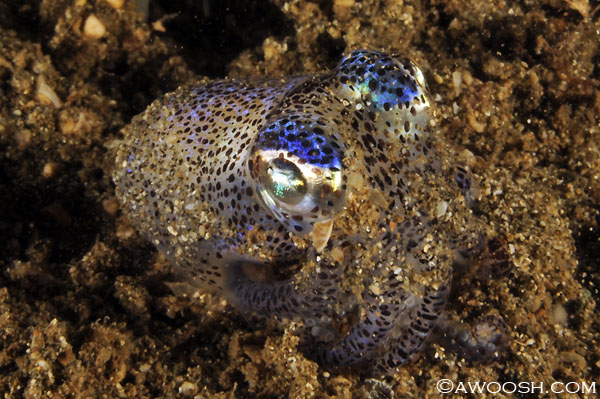 Berry’s Bobtail Squid – Euprymna berryi
These little cuties are quite reclusive. They are generally not visible during the day, but can be active at night. Their defense is to burrow down into the muck (like many other night creatures), so getting one out like this took some patience. They are maximum 2 inches long – this one was under an inch. 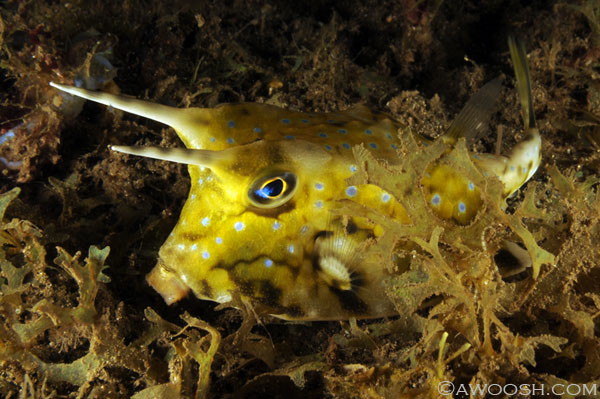 Longhorn Cowfish – Lactoria conuta
This was a little one – a juvenile – about 3 inches long. 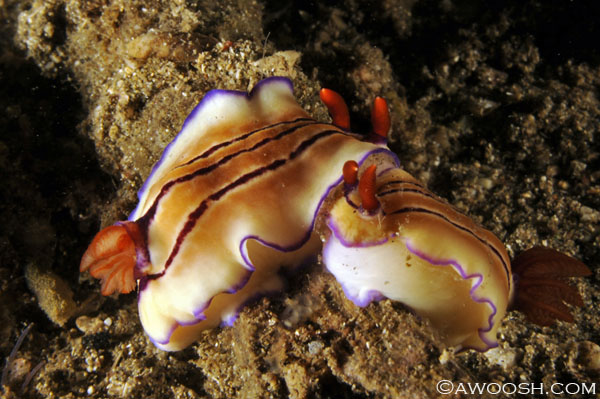 Emma’s Hypselodoris Nudibranch – Hypselodoris Emma
These are little nudibranchs – about an inch long. This pair is engaged in hermaphroditic sex. Lots of nudi nookie on our night dives ;^) 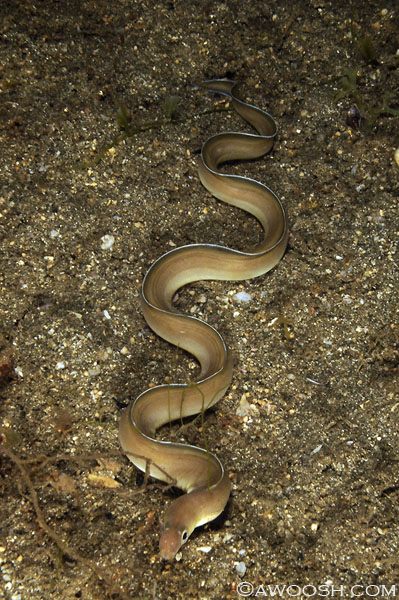 A free-swimming White Margined Moray Eel – Gymnothorax albimarginatus
Another one of those moments where something long and snakelike slithered into the beam of my light from out of the dark. Spooky, I tell ya! 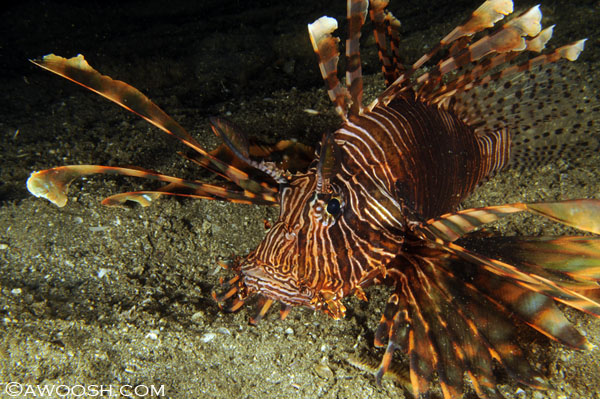 Longspine Lionfish – Pterois andover
Lionfish are critters you give a wide berth to – the tips of their fins are very venomous. 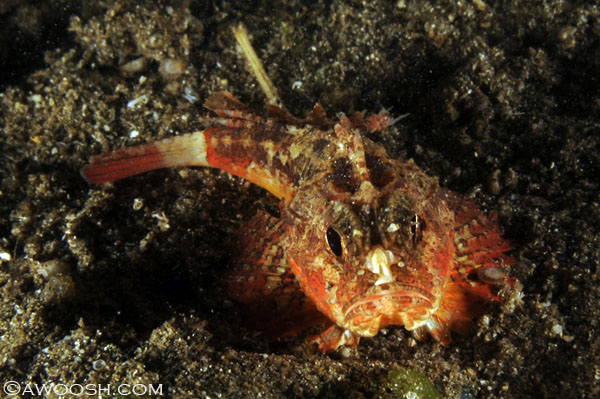 I can’t make a positive identification for this little fish, but I am thinking it’s a member of the Scorpionfish family. A positive ID would be greatly appreciated… 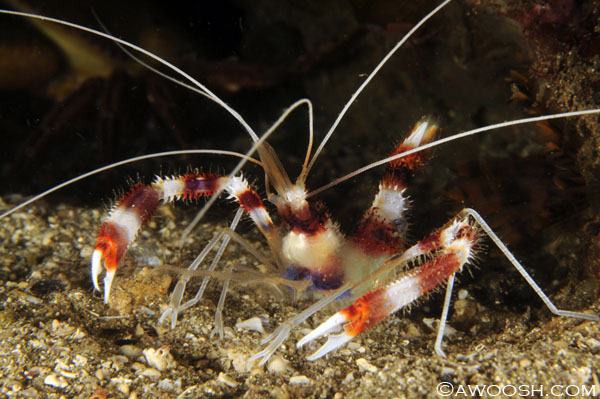 Banded Coral Shrimp – Stenopus hispidus
These shrimp (about 2 inches long) are relatively common in tropical waters. I had been trying for a while to get a decent shot. 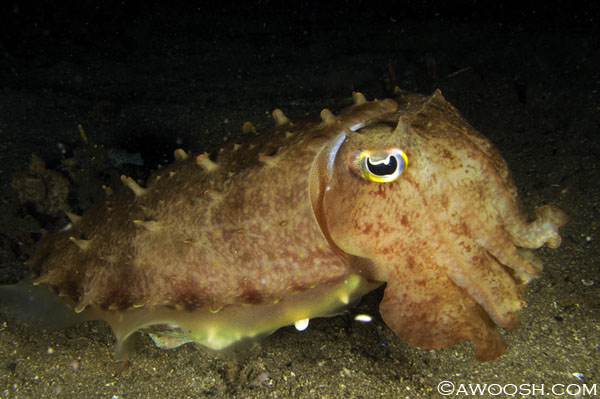 Broadclub Cuttlefish – Sepia latimanus
This is quite a big cuttlefish – about 2 feet long. For this one shot alone, I was glad I had a wider lens than the 105mm macro. They are masters of camouflage, and can change their colours and patterns instantly.

Next up – we get our heads out of the muck and back into the blue. And things need to start speeding up on the final instalments of the Komodo Chronicles – a dive trip looms… ;^)