Christmas and New Year’s have come and gone in a flurry (well, actually here in Vancouver, not so much a flurry as a soggy deluge – it was the wettest December I can remember). It was a busy time, with nary a pause for blogging.

When I last made an entry, we were at Sangeyang Island, north of Komodo National Park. It was some beautiful, calm diving, highlighted by champagne bubbles percolating out of the sand, and scores of nudibranchs.

The last dive we did in the area was a dusk dive, at a site named Bonto. After the relatively mellow dives earlier in the day, those of us who made the plunge got a rude surprise when we found ourselves in a pretty hefty current. As I have written before, current at night is always a bit unsettling – it is very easy to become separated from other divers, especially in low visibility, and this dive was no exception. This was a muck dive (silty bottom), so there was a veritable sh*tstorm to contend with as those of us with cameras tried to line up for some shots of some of the crazy critters that live there. Holding place in current, in deep silt, is not easy, and we all managed to kick up a lot of dust.

Although Mr G sat this one out, my buds Wendy and Mary were along for the ride (Wendy without her camera on this dive, and Mary’s camera is RIP), and they were awesome at finding some cool stuff for me to try to shoot. And as usual, I found myself all by my lonesome for a pretty big chunk of the dive – being solo was not the dive plan, but when sh*t happens, it happens bigtime.

One thing that made this dive remarkable was the number of fireworms creepy crawling along the bottom. These are very toxic little critters, and avoiding contact is critical. 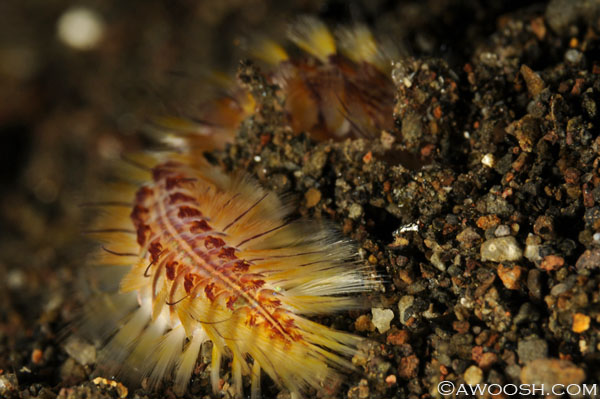 In a previous post, I featured a shot of a snake eel out foraging on the reef. I had seen snake eels before (a couple of varieties), but had never seen one out of the hole. The one that I found on this dive is the usual sighting: 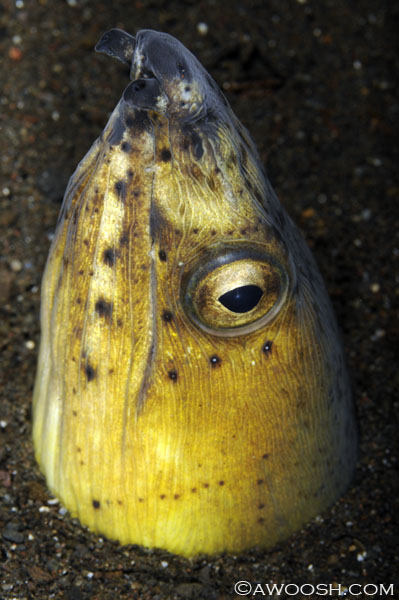 These are not tiny eels – the part of the head sticking out of the sand was at least 3-4 inches high. When it is out of the hole it is several feet long. They are creepy things with those big eyeballs, ready to ambush some unwary passersby. Having been a bit freaked by the free-swimming specimen that charged me on that previous dive, I did not invite this one out to play ;^) 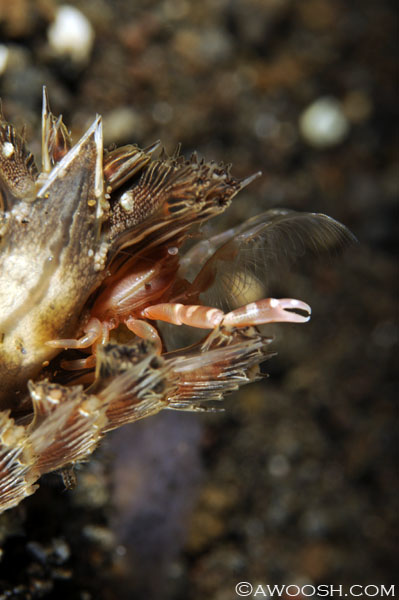 I can’t figure out the ID for this little critter. Check out the feathery appendages it uses to sweep for food.

And then this gorgeous nudibranch: 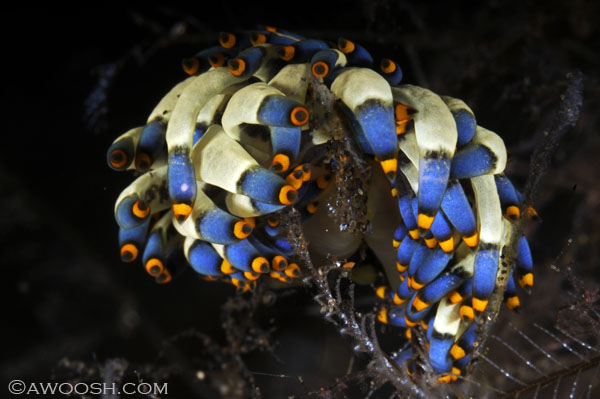 And then this beautiful nudibranch laying an egg ribbon: 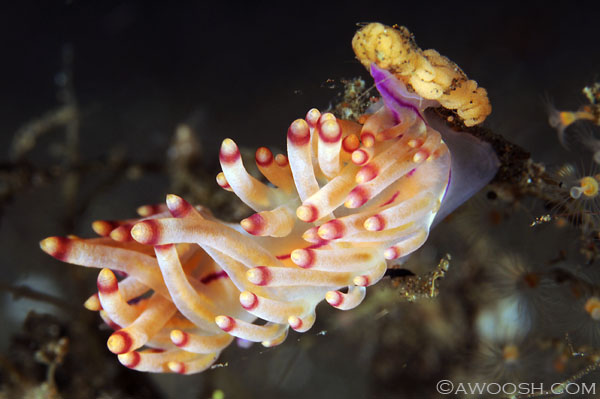 Note to self – dive with people with good eyes more often ;^)

We all got very excited when this roughsnout ghost pipefish was spotted: 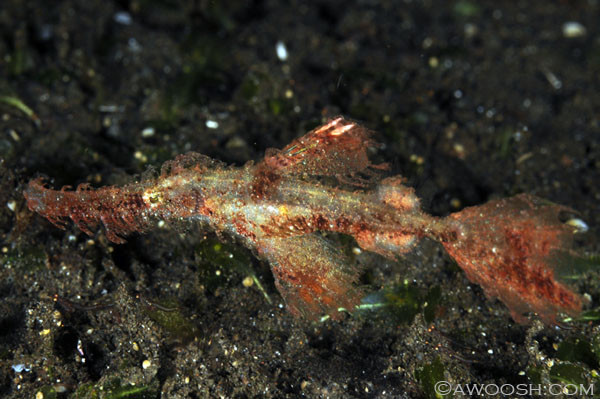 And this strange little fish that hops along the bottom and which has a perplexing habit of turning away from the camera, so no head shot for moi: 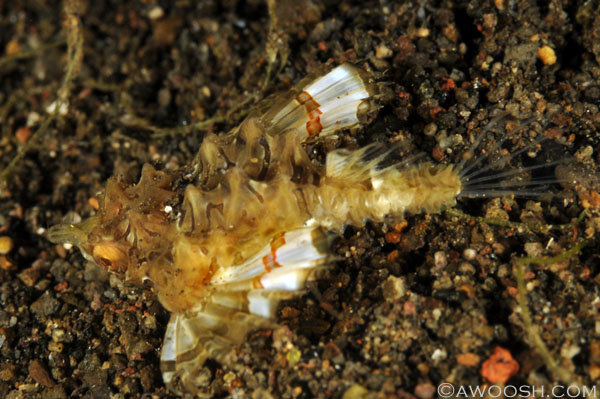 And then it happened – I put my head in the camera to take a shot of something, and when I looked up, everyone was gone. So I spent the next half hour or so putzing along into the current – it wasn’t deep (maybe 30 feet), and the current was manageable, so I stuck with it rather than bailing on the dive. Near the end of the dive, I went up to the shallows, and let myself drift with the current, and happily ran in to a few divers with whom to surface. 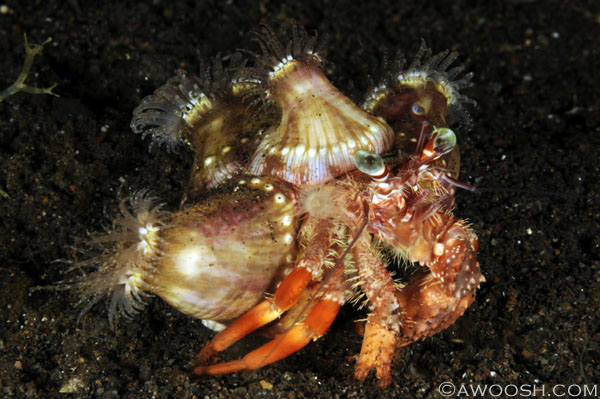 These anemone decorator hermit crabs were out in force – I probably saw a half dozen of them. Decorator crabs always make me smile with the crazy assortment of stuff (in this case anemones) they cart around with them. 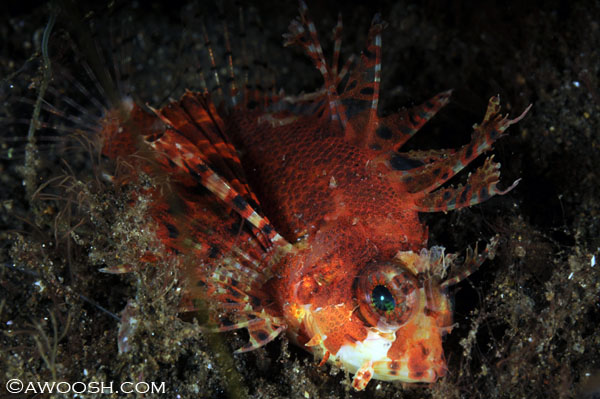 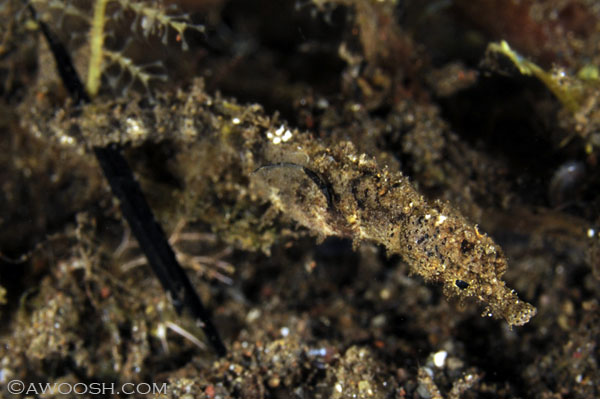 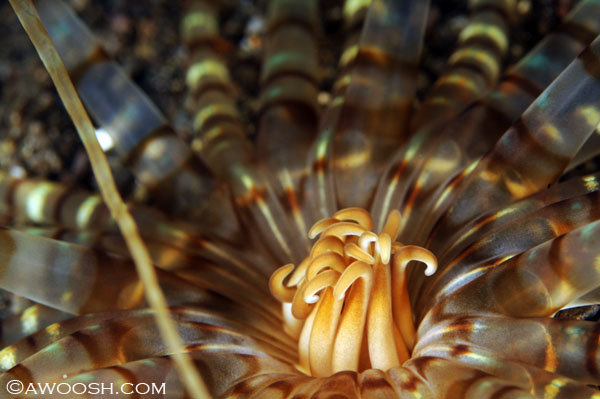 Some sort of anemone or corallimorph?

Next up – we get bombed in Bima…

Born and raised on the west coast of Canada, I have always felt a strong connection to the sea. But for many years, I stayed on the surface, afraid of what lurked down deep. When I was in my early 30's, with three young children (aka the P's), my husband (aka Mr G) signed us up for a SCUBA certification course, as a surprise. Although I had my fears, my stubbornness prevailed, and somehow I made it through four murky, frigid, cold water dives in Vancouver to successfully pass the course. Soon after we went diving off the west coast of Mexico, in the Sea of Cortez, where my eyes were opened to the beauty and other-worldliness of the life down under. And the rest, as they say, is history. I currently have well over 2000 dives under the belt, and I have been fortunate to travel extensively in Asia, Australia, Fiji, Galapagos, Costa Rica, California, the Caribbean, Mexico and here in British Columbia. After shooting hefty DSLRs for many years, I just switched over to a groovy Olympus Micro Four Thirds camera, in a Nauticam housing, with dual Sea & Sea strobes and a bag full of lenses. In addition to this blog and my personal website (Awoosh.com/Directory), which is linked at the top of the blog, my stuff has been widely published in a variety of magazines and websites, including an ongoing regular monthly feature on Scubadiving.com. All links to this work can be found in this blog.
View all posts by Judy G Diver →
This entry was posted in Indonesia Travel, Photography, Travel. Bookmark the permalink.