My Favourite Place To Dive? – Part 4

So far, I have revealed British Columbia, Cocos Island (Costa Rica), and Fiji as my picks for my favourite places to dive.

That brings me to my next (alphabetically sorted) instalment, which begins with a G – G for gorgeous, gnarly, gotta-get-there Galapagos – the muthah of all dive meccas. 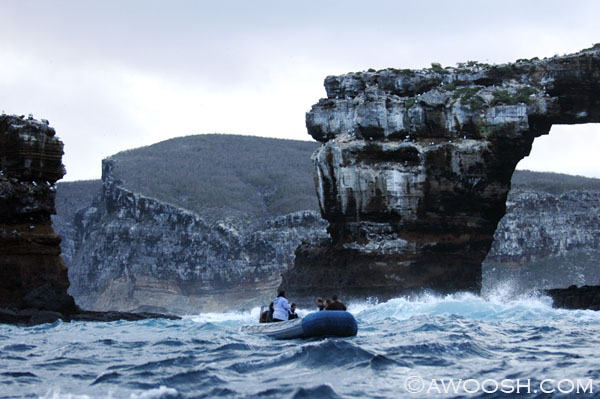 Galapagos is one of those places that is way out there – both literally and figuratively. Located some 500 miles off the coast of South America, I am not entirely clear why these islands belong to Ecuador; they could just as easily been claimed by any number of countries, citizens of which made landfall over the last several centuries, and several of whom eventually settled there. I won’t rehash the entire history of the islands in this blog bit, but if you would like to surf into here, there is a fairly succinct description of the history of the islands, compiled from several sources, from discovery to present day.

And it is a bit of a shame that Ecuador’s flag flies over the Galapagos – despite a healthy budget funded by big fees being collected (US$100 per person at time of writing) from the stream of tourists visiting these unique islands, Ecuador’s corrupt government is pretty much hopeless (some might even say negligent) in adequately protecting them.  The Galapagos Islands are a UNESCO World Heritage Site and a huge portion of the waters surrounding them are a marine reserve, but that does not seem to stop rampant poaching around the islands, especially for sharks.

I have been very fortunate to be able to make three trips to the Galapagos – in 2003, 2005 and 2007.  Each one was a grand adventure with a great group of buddies.  All three trips were aboard the Galapagos Aggressor boats (they have two in the islands).  The Aggressor did it right by us – nice boats, excellent dive crew, great itineraries.

Since my last trip, the rules of engagement for divers have been altered several times, including limiting itineraries (especially days diving at Wolf and Darwin – the primo dive sites).  I believe that currently divers on live aboard boats are no longer permitted to do the wonderful land tours (excepting the Darwin Research Station at Santa Cruz Island) that we enjoyed on all three of our outings. The diving was epic, for sure, but the hikes were also a wonderful component of our trips. Currently, live aboard divers wanting to enjoy some island hopping land touring in the Galapagos would need to add on extra days. 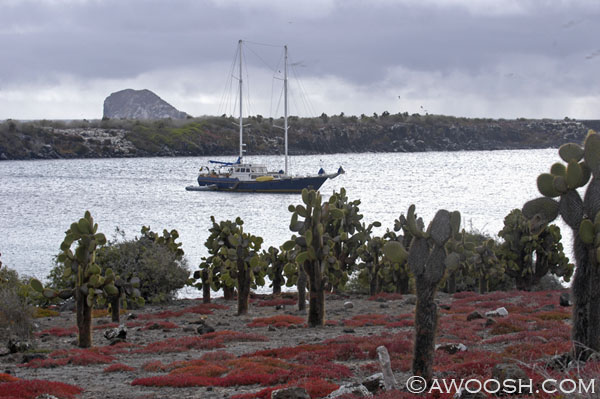 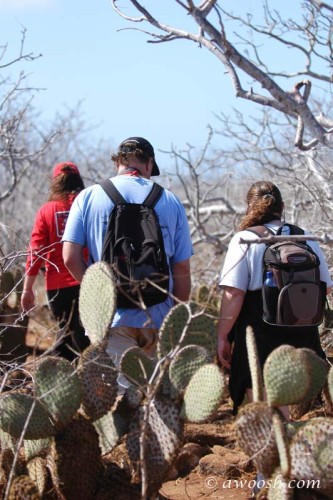 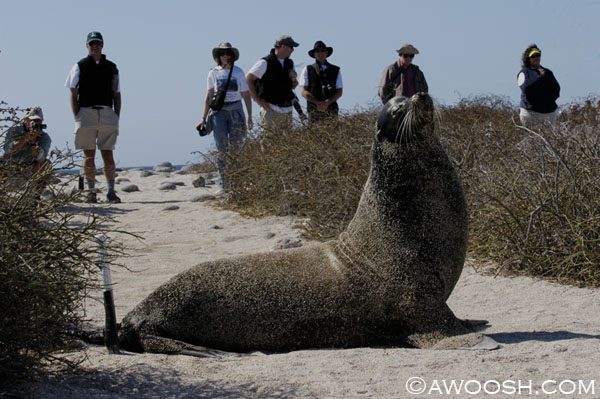 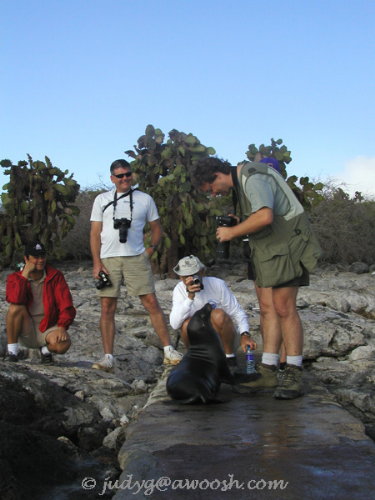 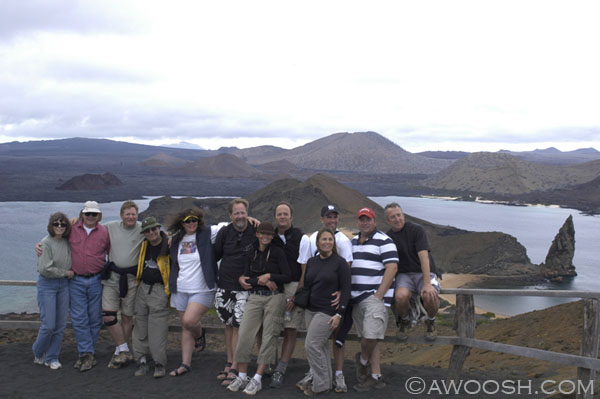 Geologically speaking, the Galapagos are relatively new islands.  Formed over a “hot spot” in the earth’s crust, the islands in the group differ in age, with a couple of islands still in the process of being formed through volcanic activity. 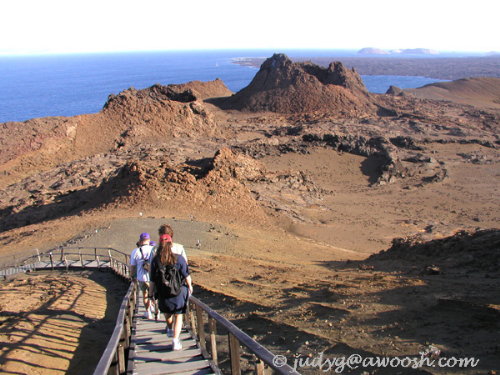 The islands straddle the equator, and so you would think the water would be warm, but not so much. The Humboldt current is largely responsible for the cool water and cold upwellings.  Water temperatures range from the high 70’s (in the northern islands) to chilly mid 50’s at some of the southern sites.  Being the cold water wuss that I am, I chose to dive the first two trips in my drysuit.  I was toasty warm, but the extra drag on the suit made for some really exhausting diving. On the third trip, I sucked it up and dove wet (a 7/5 mm full suit plus 5/3 mm hoody vest). I was okay in the north islands, but really felt the cold in the south.  I will admit that, despite being chilly on many dives, diving wet was a much easier gig.

So here’s the thing about diving in the Galapagos – it’s not easy.  Hefty currents, remote sites, big animals and cool water make this diving best suited for people with quite a bit of dive experience under their weight belts, most especially experience diving in strong currents. Even very experienced divers, including divers who have bagged lots of dives in the Galapagos, can get themselves into serious trouble. 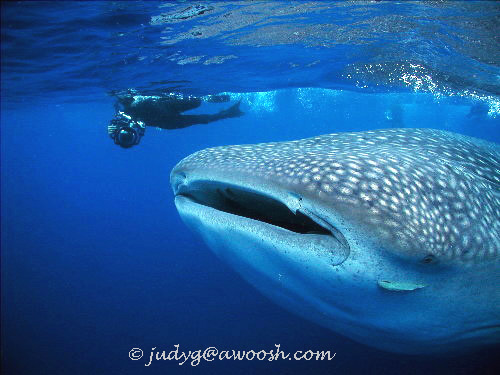 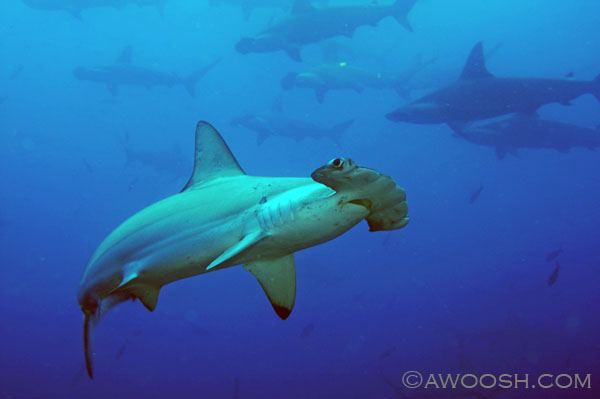 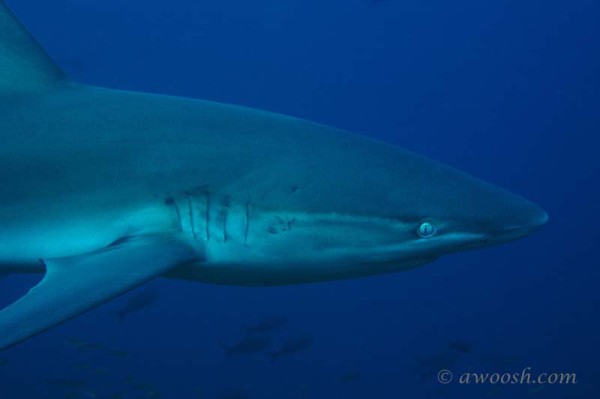 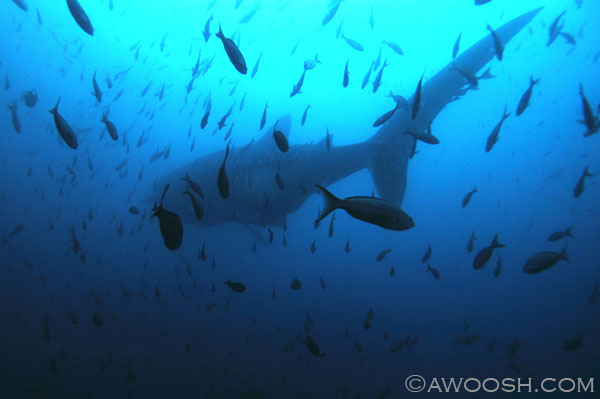 Whale Shark – a very common view – although they appear to swim very slowly, they typically swim into the current, and that big tail provides a lot of forward thrust. 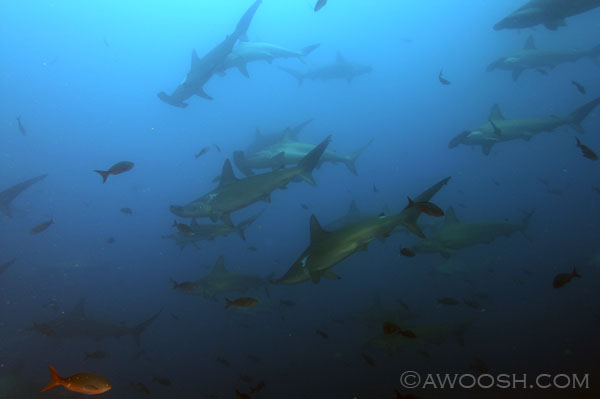 This is what we came for…

There are other attractions too – sea lions, dolphins, eagle rays, turtles, schooling fish, manta rays and mola molas (although I have yet to see one) all live there. 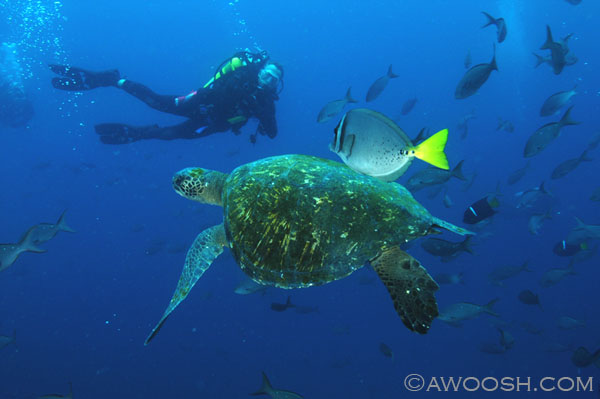 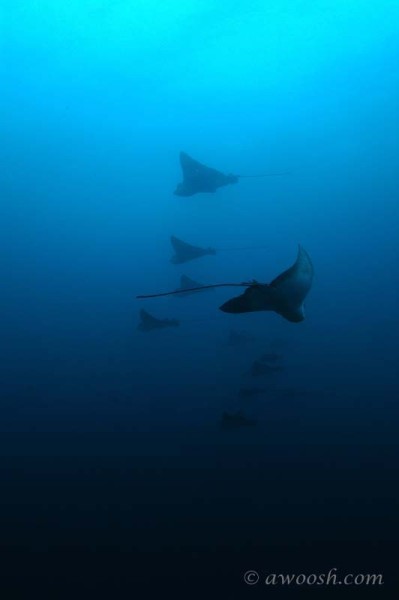 A Squadron of Eagle Rays

There are many other notable smaller creatures as well – often overlooked while staring out into the blue, waiting for a Whale Shark or a school of hammerheads to materialize from out of the gloom. 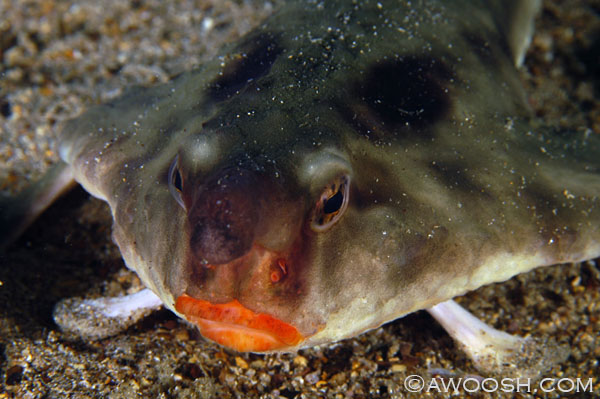 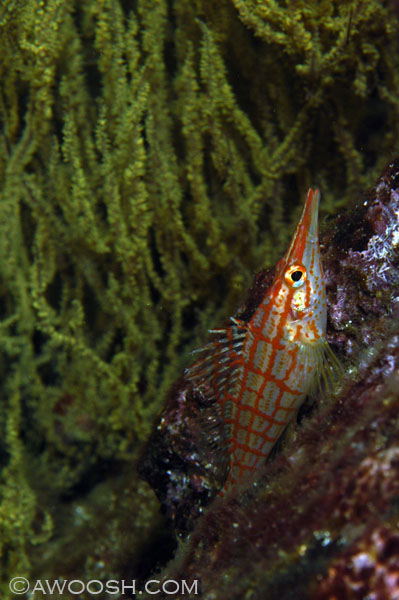 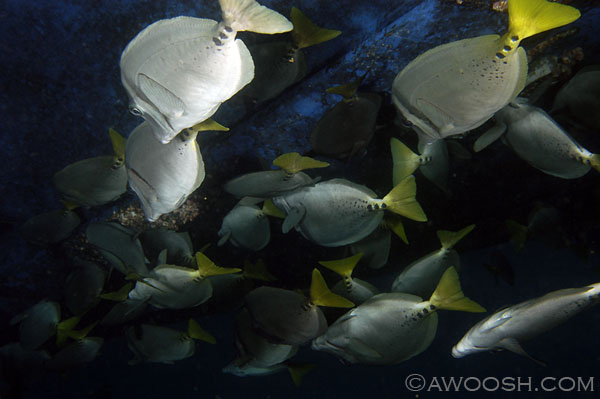 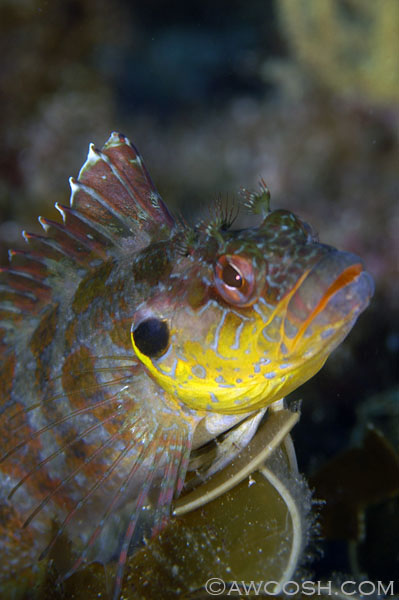 Ready for his close up… 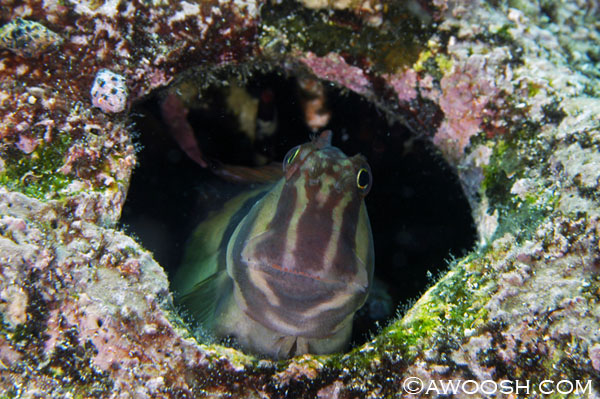 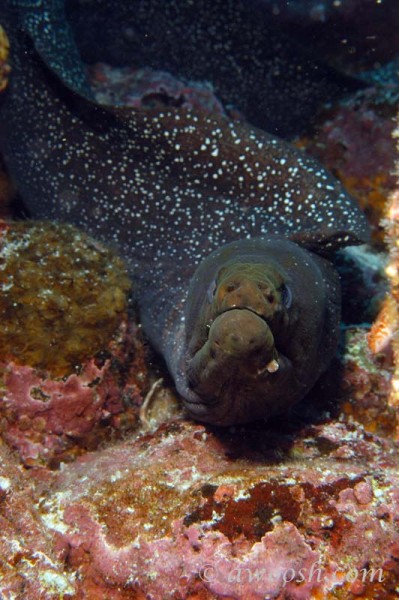 The reefs themselves are rocky, urchin-infested and not particularly exciting.   But then again, you shouldn’t go to the Galapagos expecting pretty coral gardens (although the black coral gardens at Cousin’s Rock are beautiful indeed). 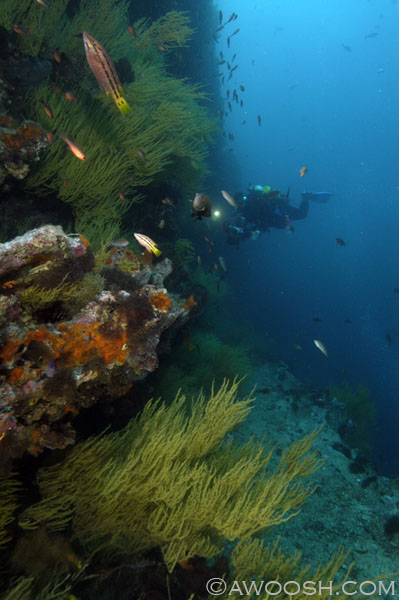 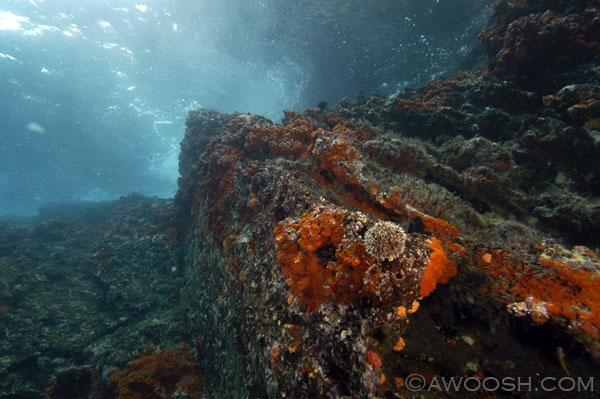 A few words about taking pictures in the Galapagos – like the diving, it ain’t easy.  Strong currents, murky water, low light (it is typically overcast during the peak Whale Shark season – July to October) all make it tough to bag good shots, especially the ‘big picture’, wide angle variety.  Sharks and other big animals in the distance blend with the water, making it very difficult for the camera to focus.  With all the particulate in the water, many photographers choose not to even attach the strobe(s) to their rig – without the strobes, the camera is much more compact and not getting dragged by blustery current.  I have always dove with strobes, but I am able to turn them off when shooting images where there is nothing to be lit in the foreground.  It is also tempting to just shoot wide angle in the Galapagos, but I highly recommend both a mid-range lens (for fish portraits, turtles, octopus etc) and a macro lens for sea horses, blennies, nudibranchs etc.

A few more pix – of some of the weird and wonderful Galapagos residents, to finish this thing off: 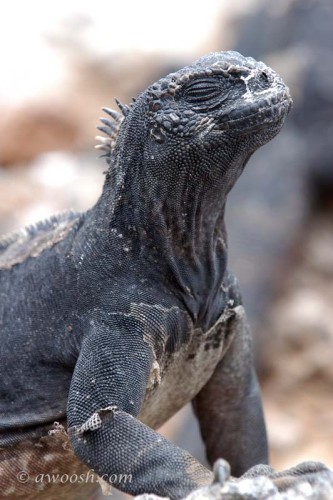 Marine Iguana – these guys are amphibious 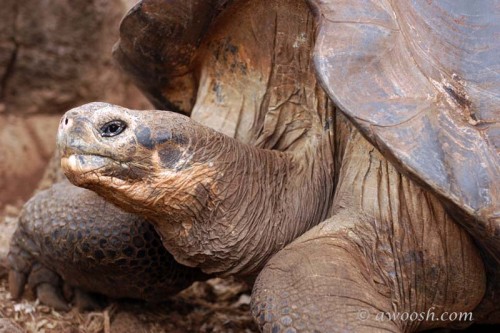 Giant Tortoise (the Spanish translation of which the Galapagos are named). This is George, the last of the Pinta sub-species, who passed away, around age 100, in June 2012 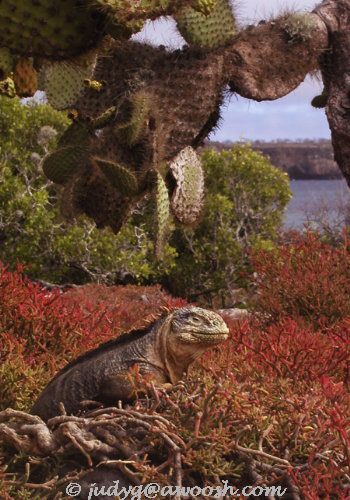 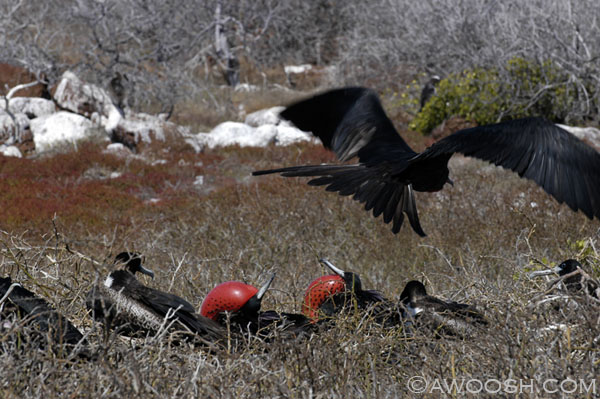 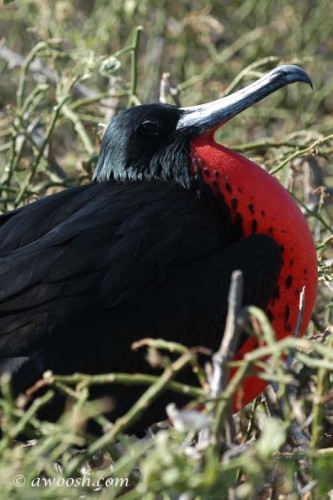 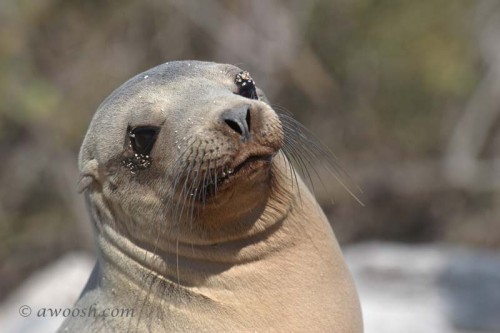 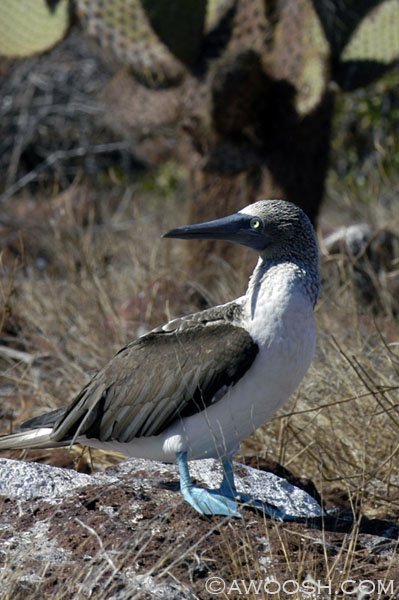 Over the years, I produced several galleries, slideshows and trip reports from my journeys to the Galapagos Islands, but it was fun revisiting this wonderful destination through this blog entry.  In fact, it gives me a hankering to go back ;^)

To see any or all of this stuff, feel free to follow this link —-> Awoosh Galapagos Directory.

I would also be happy to answer any questions about this or any other destination I have featured in this “My Favourite Places to Dive” series.  Please feel free to comment here, message me on Facebook (Judy G Diver), or e.mail me.  My e.mail contact info is here.

Born and raised on the west coast of Canada, I have always felt a strong connection to the sea. But for many years, I stayed on the surface, afraid of what lurked down deep. When I was in my early 30's, with three young children (aka the P's), my husband (aka Mr G) signed us up for a SCUBA certification course, as a surprise. Although I had my fears, my stubbornness prevailed, and somehow I made it through four murky, frigid, cold water dives in Vancouver to successfully pass the course. Soon after we went diving off the west coast of Mexico, in the Sea of Cortez, where my eyes were opened to the beauty and other-worldliness of the life down under. And the rest, as they say, is history. I currently have well over 2000 dives under the belt, and I have been fortunate to travel extensively in Asia, Australia, Fiji, Galapagos, Costa Rica, California, the Caribbean, Mexico and here in British Columbia. After shooting hefty DSLRs for many years, I just switched over to a groovy Olympus Micro Four Thirds camera, in a Nauticam housing, with dual Sea & Sea strobes and a bag full of lenses. In addition to this blog and my personal website (Awoosh.com/Directory), which is linked at the top of the blog, my stuff has been widely published in a variety of magazines and websites, including an ongoing regular monthly feature on Scubadiving.com. All links to this work can be found in this blog.
View all posts by Judy G Diver →
This entry was posted in All About Scuba Diving, Galapagos Travel, Travel, Trip Reports and tagged Galapagos. Bookmark the permalink.

9 Responses to My Favourite Place To Dive? – Part 4