My Favourite Place to Dive? – Part 2

So here I am, in the process of sharing my favourite dive destinations. This post is the second in the series.  The first selection is here.

Before I blurt out my next (non-prioritized) favourite, perhaps I should reveal where I have been diving, so far, so readers can get a frame of reference for my choices.

In alphabetical order, here’s the history:

Dayum! That is a fair whack of travel in the past 18 years. Much of it was made possible through Aeroplan Points Redemption Seats – Mr G travels extensively for business, and the reward for all his butt-numbing biz travel is yet more butt-numbing travel (in free seats!) with his wanderlusting wife ;^)

As an aside, when we were certified (way back in 1994), it was early days for the internet. In fact, I did not have access until 1996. Prior to my surfing safaris, we relied on our travel agent and scuba magazines to help us decide where to go. Unfortunately, our travel agent was a non-diver, and none of our family or friends dove (and I’m pretty sure most of them thought we were insane/irresponsible to be doing so ;^), so there were not many inside sources for us to get tuned in to the ‘good places’. I like to blame the mistake of going to Sandals on Antigua on our lack of internet connection, cuz friends don’t let friends dive Sandals ;^)  It also took us a few years to save up the pesos to buy our own equipment, so in the early days, our choices were limited to locations where rental equipment was available.

The astute reader will have figured out that I have already passed over Antigua, Australia, Bahamas and Bonaire on the way to my first choice (by alphabet), British Columbia. It is not that these are bad places to dive (with the exception of Antigua, which was almost not worth getting wet for – totally fished out and very uninteresting reef structure), it is just that they don’t quite make it into my top tier. Australia has some very nice diving – our trip to Heron Island, and several years later, to the area off the northeast coast were very enjoyable. However, the post-Lonergan-fubar, highly restrictive diving culture there tends to dampen things a bit for me. So I would put Australia up there in my ranking, but it doesn’t quite make it into my “favourites”, ie I am not yearning to go back there any time soon. Bahamas is nice, but ubiquitous with most Caribbean diving I have done – meaning that nothing really stands out about it – you could be any of numerous places in the Caribbean and they would be indistinguishable from “Bahamas diving”. Bonaire is a very popular dive destination – lots of dive sites and lots of diver infrastructure. I enjoyed it very much (despite the lack of interesting terrain), but I am not in a hurry to return. And for the amount of travel to get there from Vancouver, I might as well go to Australia ;^)

And now I am going to make a few (more) people unhappy, because I am going to pass over California. Don’t get me wrong – California is fun to dive (especially the gorgeous kelp forests and the sea lion rookeries), and I have had some great times there. It may not make my all time favourites list, but it’s close, and I look forward to returning to dive California again soon.

So that brings me to:

Like British Columbia, Cocos is not easy diving (but it is a heck of a lot warmer ;^).  As I mentioned in a previous post in this blog, Cocos Island is waaaaaaaaaay out there – it is a 36 hour crossing (by boat) from the mainland to reach the island – approximately 350 miles.  It was a very rough passage to get there (mercifully, the return was much more benign), and I was super grateful that we had a couple of docs on the trip who brought along some serious nausea meds.  Even my tried and trusted scopalamine patch couldn’t save me on this one.

As we pulled up to the island (which is in the middle of freaking nowhere), they should have cued up the soundtrack from Jurassic Park.  It is rumoured that they filmed the opening sequence of the movie there (ie the approach by helicopter).  I don’t know if this is actually true, but the island for sure has a wild, primordial aura about it. 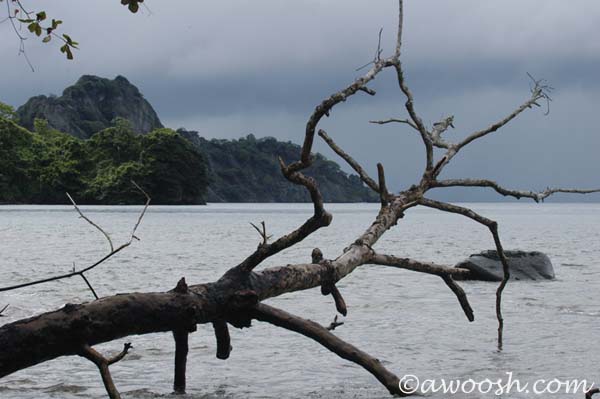 We saw only a sliver of sun during our entire week visiting the island.  July is winter in Costa Rica, which brings much rain, but apparently it is very often cloudy at Cocos Island, year round.  But winter is when the aggregating hammerheads come up into the shallows – to feed? to breed? to get cleaned?  Possibly for all these reasons. 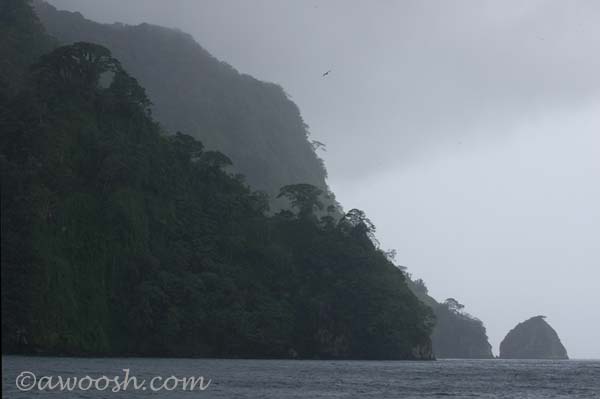 There is no permanent settlement on the island.  There are a couple of ranger stations, occupied by the poor sods who attempt, apparently unsuccessfully, to keep fishermen out of the six mile buffer around the island.  Cocos is well known for its seasonal population of schooling hammerhead sharks – and for sure the fishermen know all too well when to come and poach the sharks, whose fins are so highly lucrative in the Asian markets.

What makes Cocos outstanding (and why I have chosen it as one of my all-time faves) is that it is one of very few places left on the planet where you might be lucky and get to see massive schools of hammerhead sharks.

I am going to admit up front that I am not super happy with the wide angle images of the hammerhead schools that I am going to share, but they are the best that I managed. These images were taken from very deep (100’+, at an infamous site named Alcyone). Alcyone is an underwater sea mount, with the top of the hill being about 90 feet below sea level.  The theory is that Alcyone is one bigass  cleaning station for the hammerheads.

This is a pretty deep dive, and we did it several dives in a row (diving Nitrox).  By the end of the second day of diving Alcyone, my computer was not very happy with me ;^)  There was also the matter of a sinking panga, but I will save that story for another day… 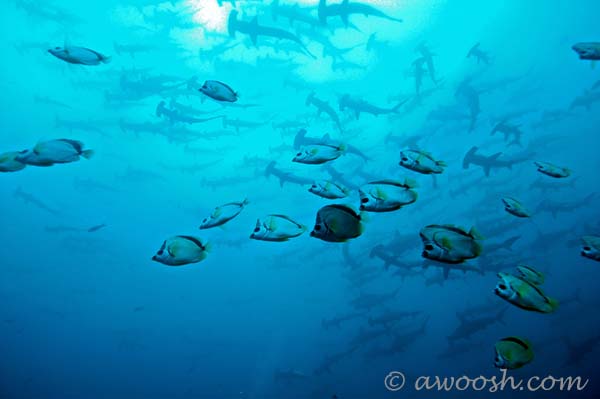 Getting my camera to focus in the low light and less than stellar visibility conditions was super frustrating.  Those little butterflyfish are the cleaners. 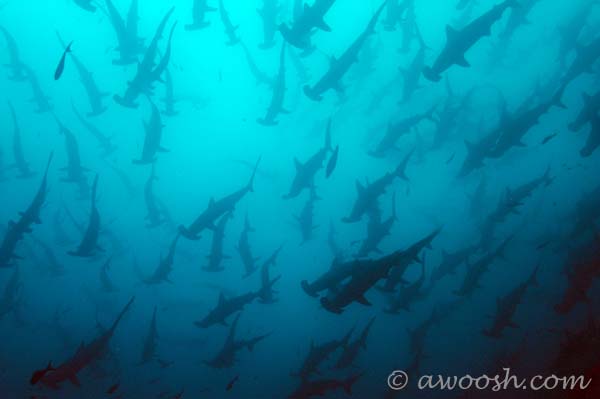 I figured out to really see the constellations of hammerheads like these, you had to get away from the other divers.  Hammerheads do not like bubbles.  In fact, they don’t seem to like people.  On one dive, nearing the end of our bottom time, Mr G was getting a bit nervous about incurring a deco obligation.  I was not so much concerned, and was still camped out, trying to bang off a few more shots before we ascended ;^)  Mr G retreated up behind me 20 or 30 feet, and waited in mid-water for me to get a move on.  He tells a good tale of a hammerhead that spotted him from 50 or 60 feet away.  The shark turned towards him, squeezed down his pectoral fins (never a good omen), shook violently a few times, and then with a couple of flicks of its tail, it charged Mr G.  It was only at the last instant that it veered away.  I think someone might have had to clean his wetsuit after that bit of excitement ;^) 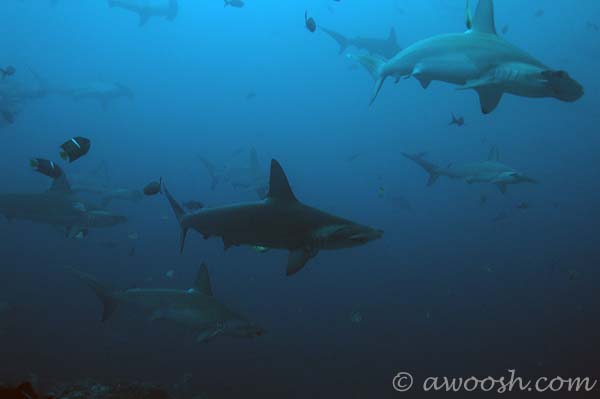 The only way to get a shot like this was to hunker down on the edge of the seamount, like a hunter in a duck blind, and hope that the sharks would come in to get cleaned.  I might have been getting the hang of how to hold my breath to get this shot.  As I mentioned before, the hammers don’t like bubbles, and in order to give the sharks a false sense of security about approaching the reef, I will confess that a bit of, er, breath inhibition was occasionally necessary. 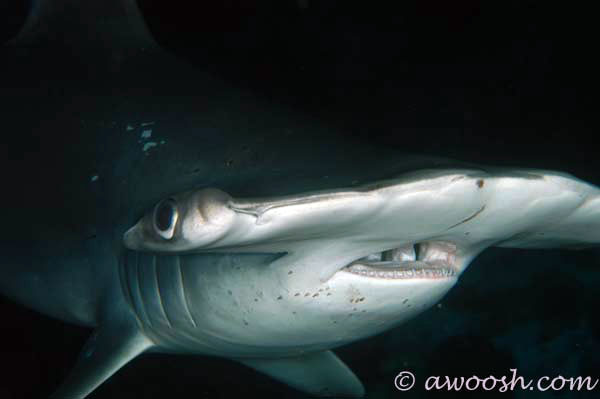 Okay, so about that breath holding thing?  I saw this shark turn into the reef (a shallower one than Alcyone), towards me, so I chugged a big puff of air and waited it out.  Closer, and closer, and closer it came.  Finally, I could wait no more, and let the bubbles rip.  And the shark just kept coming.  I swear I could have touched it…

Cocos is not just about the hammerheads, there are other sharks to be seen, including white tips, silver tips and whale sharks (alas, none seen on our trip).  There are also giant mantas, lots of marbled rays and buckets of schooling reef fish: 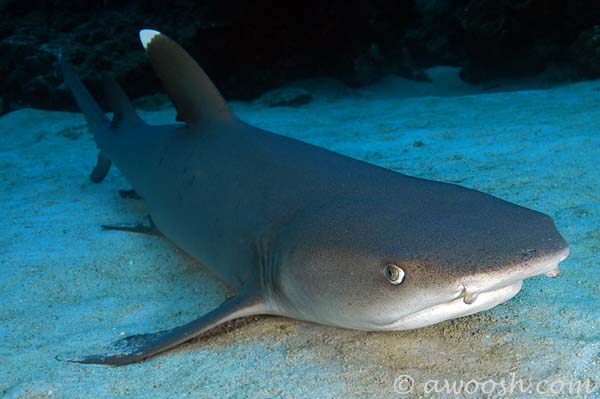 A white tip shark, chilling in the sand. 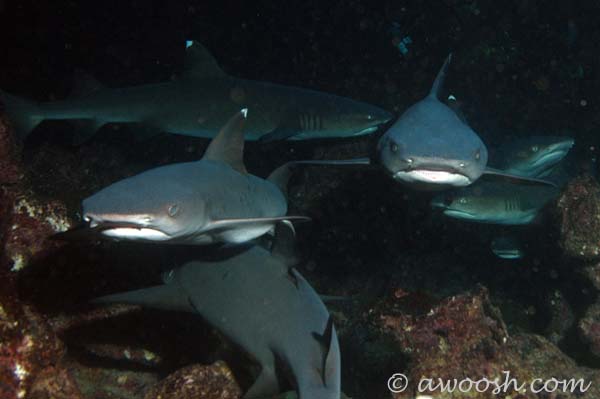 White tips, not so chilled out, during a heart-thumping night dive at Manuelita Island.  The sharks go beserk – marauding all over the reef.  And if one of them finds something to eat?  It’s a frenzy.  Again, super tough to get decent shots – getting the camera to focus in low light on moving subjects was next to impossible, but I had fun following one of my buds around who had strong video lights. 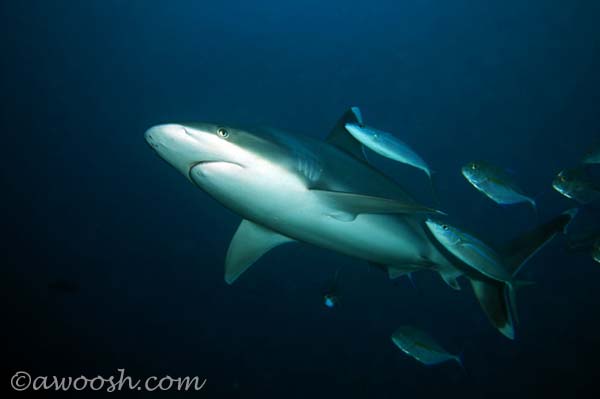 Silver Tip shark and sidekicks.  This is the only Silver Tip I’ve seen in all my travels.  It is a big, chunky shark, and I called it Sir ;^) 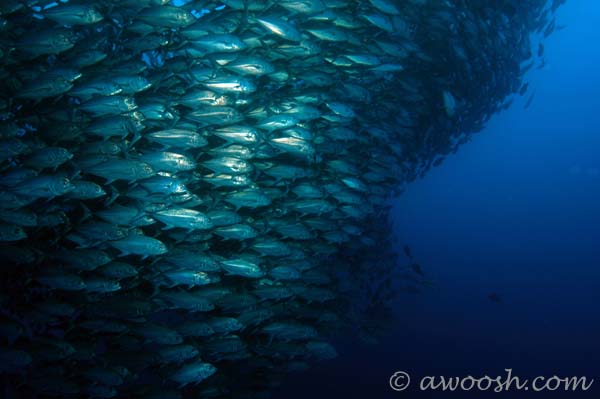 This was a massive ball of horse-eyed Jacks at a site called Dirty Rock.  I have never seen (before or since) such a huge whack of fish.  Epic.

Cocos Island is the only one of my “favourite places to dive” that I have visited only once.  I would sincerely love to go back one of these days…

Born and raised on the west coast of Canada, I have always felt a strong connection to the sea. But for many years, I stayed on the surface, afraid of what lurked down deep. When I was in my early 30's, with three young children (aka the P's), my husband (aka Mr G) signed us up for a SCUBA certification course, as a surprise. Although I had my fears, my stubbornness prevailed, and somehow I made it through four murky, frigid, cold water dives in Vancouver to successfully pass the course. Soon after we went diving off the west coast of Mexico, in the Sea of Cortez, where my eyes were opened to the beauty and other-worldliness of the life down under. And the rest, as they say, is history. I currently have well over 2000 dives under the belt, and I have been fortunate to travel extensively in Asia, Australia, Fiji, Galapagos, Costa Rica, California, the Caribbean, Mexico and here in British Columbia. After shooting hefty DSLRs for many years, I just switched over to a groovy Olympus Micro Four Thirds camera, in a Nauticam housing, with dual Sea & Sea strobes and a bag full of lenses. In addition to this blog and my personal website (Awoosh.com/Directory), which is linked at the top of the blog, my stuff has been widely published in a variety of magazines and websites, including an ongoing regular monthly feature on Scubadiving.com. All links to this work can be found in this blog.
View all posts by Judy G Diver →
This entry was posted in All About Scuba Diving, Costa Rica Travel, Travel, Trip Reports and tagged Costa Rica, Hammerhead Sharks. Bookmark the permalink.

4 Responses to My Favourite Place to Dive? – Part 2