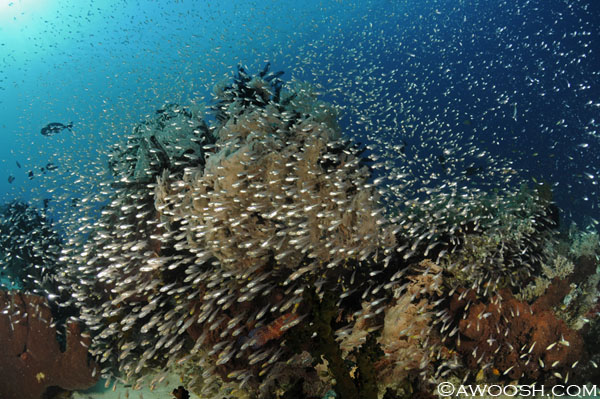 It’s been a while since I added a chapter to the Komodo Chronicles. Sorry about that. My last entry was about the final few dives we did in the Gili islands, in Northern Komodo. At this point in our trip (about half way through) the crew pointed the boat south, and we headed for the cooler waters of South Komodo and Horseshoe bay (on the south end of Rinca Island).

But before we left the Gili’s, there was one more dive to bag.

The site was called “Shotgun” and was described to us as a shallow, funnelling, flat approach, with a drop down into a large amphitheater where we would find steep formations encrusted with soft corals and (hopefully) some schooling fish. Again, this dive seems to be very tide dependant, and it would appear that the name “Shotgun” came from some hapless divers who dove it at a full, raging tidal exchange, and were thus shot through the flats and down into the bowl. For us, the dive was much more benign – just a gentle current leading us in, and then a leisurely dive in the beautiful bowl, with the current winding back up near the end of the dive. But I could totally see this being a hairy dive when the current was really ripping.

The top image in this post is from the flats before the amphitheatre. We didn’t see a lot of these swarms of glassy sweepers on this trip, but there were on this little bommie, in full force. 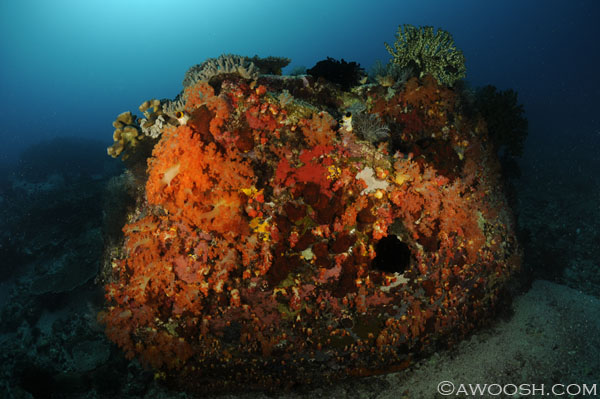 Another colourful bommie on the flats, sans sweepers, before dipping down into the bowl. 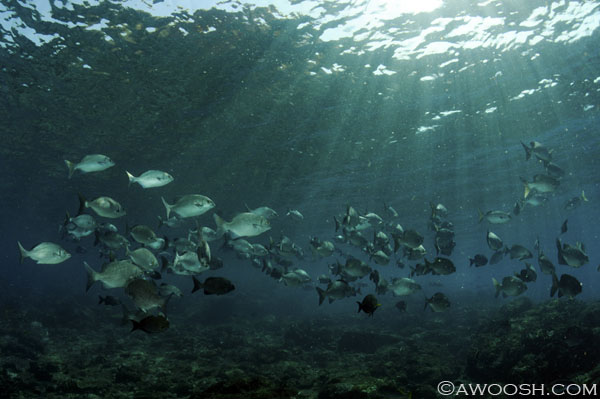 Oh, for some clearer viz. This dive was on the murky side, as my images confirm. Still, seeing big schools of fish in the sun rays is a very heartwarming experience, good pix, or not. 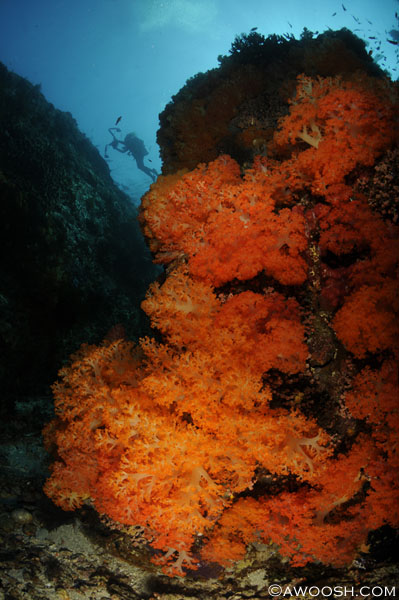 At the bottom of the bommie, looking up. I did not use any colour correction or enhancement – the soft corals really were that incredible reddy orange. 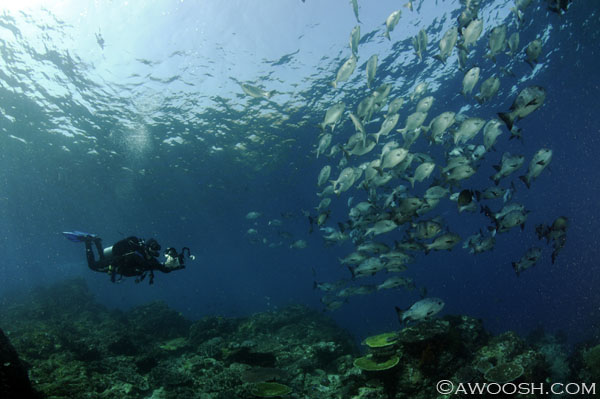 Kiddoc and his video rig go to school. 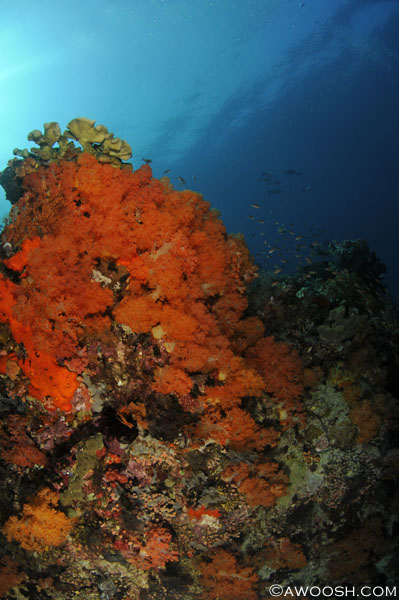 Heading south after this pretty and fishy dive, we passed through an area known as “Current City” – a wide, fairly shallow channel between Komodo Island and the island of Flores. When I visited Komodo in 2009 with my family, we dove a site in this area that the guys on the Nusa Tara (the modest Grand Komodo live aboard we were diving from) called ‘Current City’. Back then, when we pulled up to the dive site, we could see a wild ripping current over top of a very shallow reef (maybe a couple of feet deep). Our kids looked at the surface conditions and wisely decided to sit the dive out. Mr G and I, being pretty experienced in strong current, thought we’d give it a whirl.

And what a ride it was – our first ever uncontrolled elevator ride down – bottom floor at about 120 feet. It is disconcerting (to say the least) when you are fully laying air into your BC (buoyancy compensating vest) with the inflator, and finning up as hard as you can, and you are still going down. When we finally were able to stop the insanity, down in the depths, we gave each other big eyes through our masks, and made a plan to swim laterally along the reef a bit, in hopes of getting out of the waterfall. This was a wise strategy, as we would otherwise have been trying to climb the reef to get back into the shallows.

Fast forward a few years, and there we were again, in “Current City” – which the guys on the Dancer told us is not really a specific dive site name, more the name of this whole area that is subject to some wicked currents – Linta Channel.

The site on this day was called Batu Bolong – batu being a rock in Indonesia. The rock broke the surface into a small islet, and beneath it was a large, tall pinnacle with a shallow fringing reef before it dropped off, in some places, quite dramatically. The plan was to start on the lee side, out of the current, in a hard coral garden, and then make our way around, into what should have been an abating current, to a side of the pinnacle with steep walls, and, hopefully, schooling fusiliers and sweetlips.

I suspect we were dropped a bit early, because when we initially tried to make the corner, there was no friggin’ way. We watched as fish came flying around the bend, propelled by the moving water, and so we just hung tight behind a ridge, out of the current, and waited for it to stop. And then it did. Funny how that happens ;^) 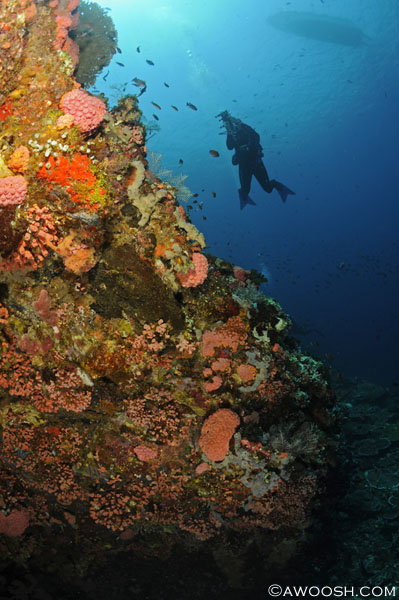 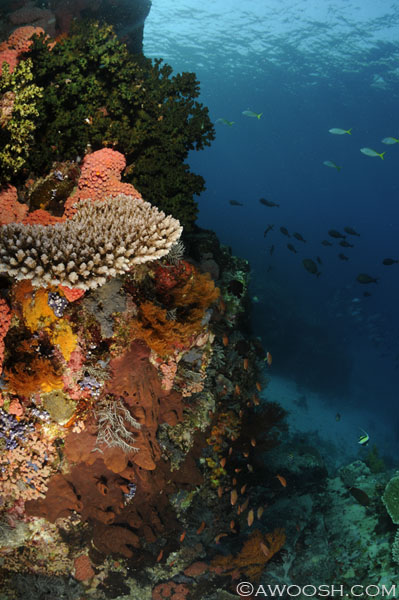 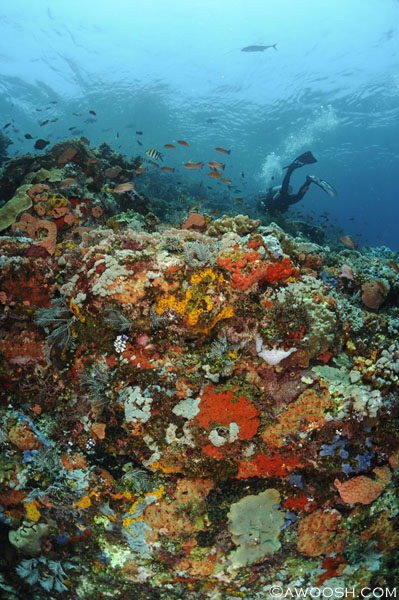 Our dive guide trying to make headway. But not so much. Check out the bend on those bubbles… 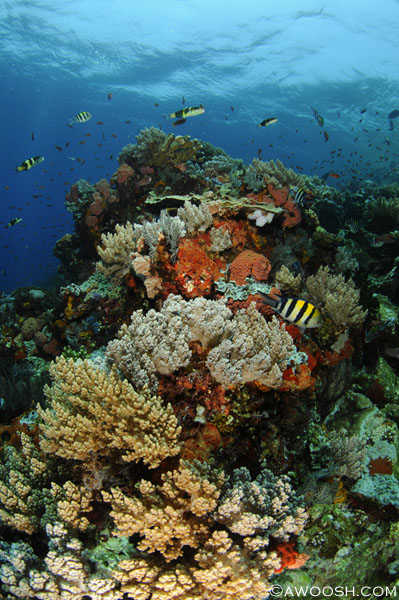 Still waiting for the current to stop. However, happy to wait in a place like this ;^) 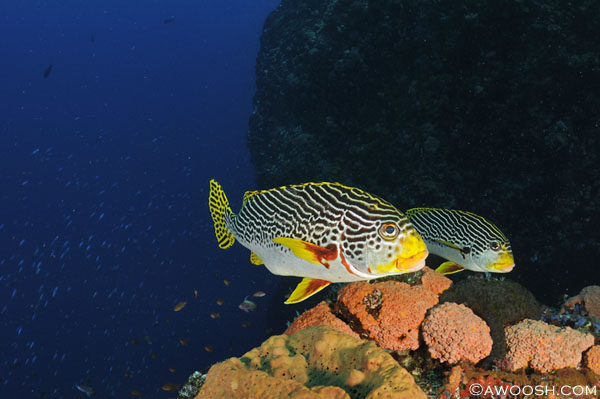 Finally, we made it around the corner. And thar they be – the promised Sweetlips (Diagonal Banded – Plectorhinchus lineatus) 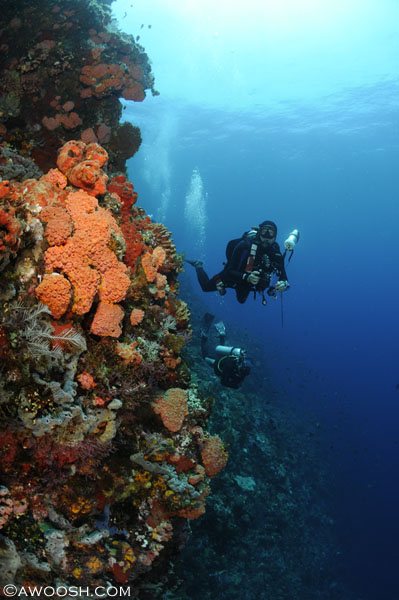 Mr G in fine form. At night, those orange clump thingies would be open into gardens of yellow cup corals. That would be quite a sight. 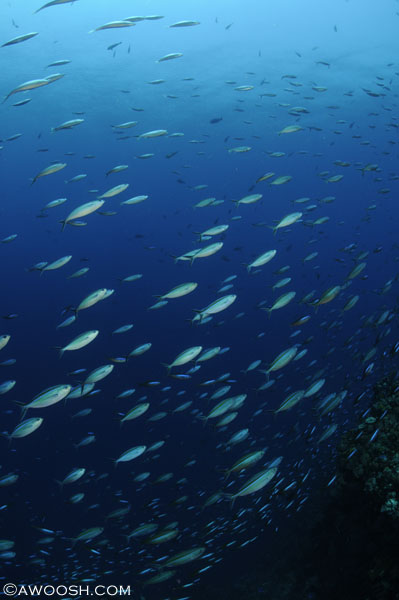 And the promised Fusiliers Fly By. 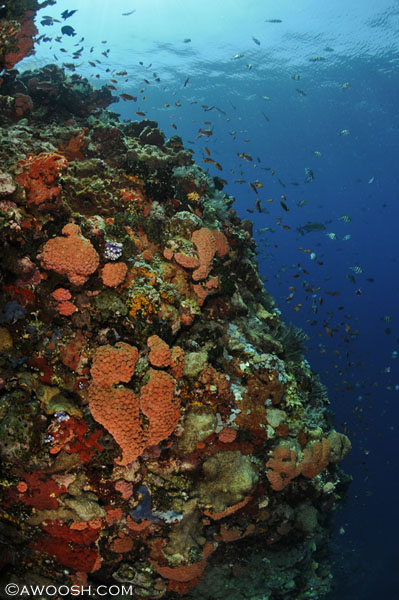 Next up: Walk softly and carry a big stick – getting up close and personal with Komodo Dragons. Plus another critter-rich, spooky night dive…

Chapter 1 – Here We Be
Chapter 2 – Time to Rock and Roll
Chapter 3 – Champagne Diving and Nudibranch Dreams
Chapter 4 – Things That Go Bump in the Night
Chapter 5 – Getting Bombed in Bima
Chapter 6 – The Muck, And Nothing But The Muck
Chapter 7 – Rinse & Repeat
Chapter 8 – Back In The Blue
Chapter 9 – Current City, Man

Born and raised on the west coast of Canada, I have always felt a strong connection to the sea. But for many years, I stayed on the surface, afraid of what lurked down deep. When I was in my early 30's, with three young children (aka the P's), my husband (aka Mr G) signed us up for a SCUBA certification course, as a surprise. Although I had my fears, my stubbornness prevailed, and somehow I made it through four murky, frigid, cold water dives in Vancouver to successfully pass the course. Soon after we went diving off the west coast of Mexico, in the Sea of Cortez, where my eyes were opened to the beauty and other-worldliness of the life down under. And the rest, as they say, is history. I currently have well over 2000 dives under the belt, and I have been fortunate to travel extensively in Asia, Australia, Fiji, Galapagos, Costa Rica, California, the Caribbean, Mexico and here in British Columbia. After shooting hefty DSLRs for many years, I just switched over to a groovy Olympus Micro Four Thirds camera, in a Nauticam housing, with dual Sea & Sea strobes and a bag full of lenses. In addition to this blog and my personal website (Awoosh.com/Directory), which is linked at the top of the blog, my stuff has been widely published in a variety of magazines and websites, including an ongoing regular monthly feature on Scubadiving.com. All links to this work can be found in this blog.
View all posts by Judy G Diver →
This entry was posted in All About Scuba Diving, Indonesia Travel, Photography, Travel, Trip Reports and tagged Current City, Diagonal Banded Sweetlips, Komodo Scuba Diving, Plectorhinchus lineatus. Bookmark the permalink.