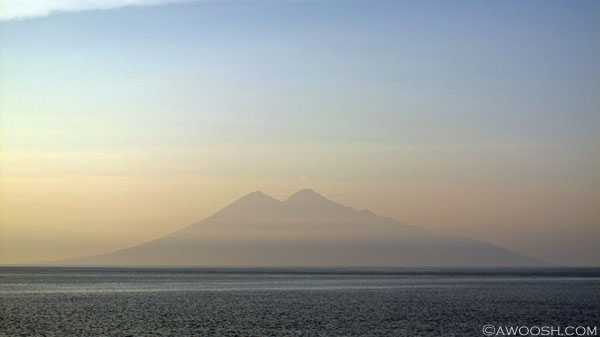 So you might be wondering, what is it like to dive near an active volcano? The answer, in the case of Sangeyang, is: effervescent, warm, and slightly freaky (one has to consider that if the thing is simmering, it could blow at some point…)

Sangeyang Island is located north of Komodo National Park. The image above was taken from Gili Lawa Island, the evening view before the crew pulled the pin and motored across the (thankfully calm) water to reach it by early morning.

Right up front, we could tell that this place was going to be special – Michael, our Cruise Director, really lit up when briefing us on it, bestowing it with such adjectives as ‘heavenly’ and ‘surreal’. And so it was.

Our first dives of the day were at a site called “Hot Rocks”. This is a famous site where the “champagne” bubbles percolate up through the sandy bottom. Rather than large farts of air, the bubbles trickle up slowly, silently, creating glistening spumes as the backdrop to some really lovely reef formations. In places there are vents where hot-to-the-touch water seeps into the ocean.  Imagine that – an underwater warming station :^) 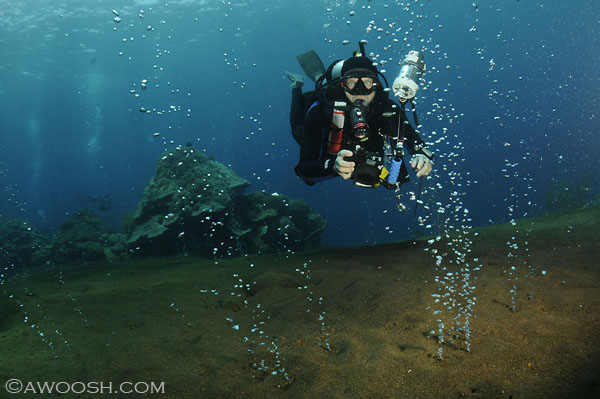 Tiny bubbles aside, this was a very pretty and productive site… 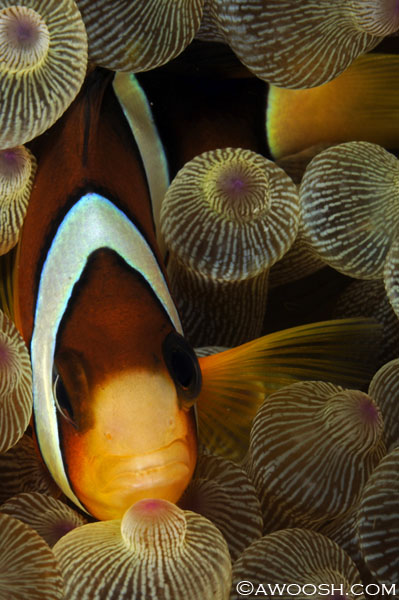 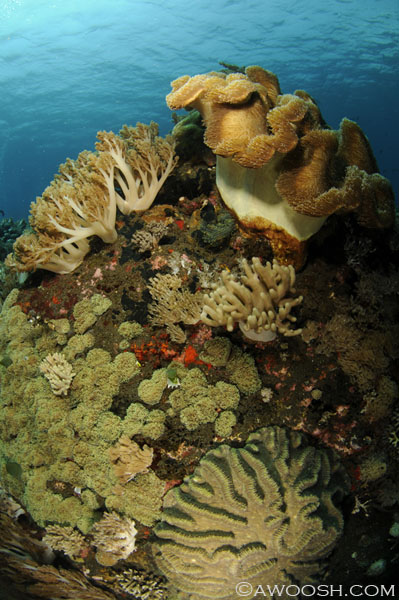 When there is healthy coral reef, there are plenty of interesting critters: 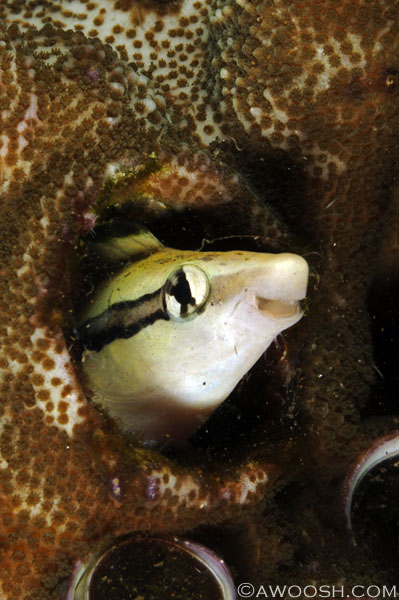 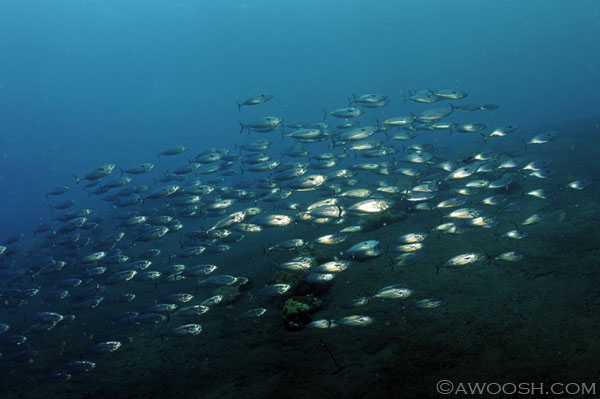 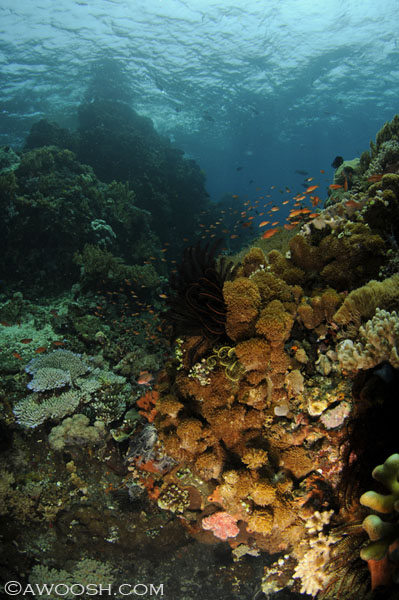 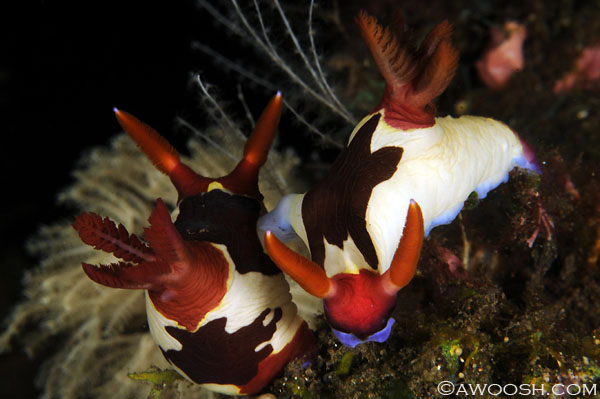 Did I mention the nudi’s? The place was veritably thick with them. I kid you not – all of these nudi’s below were photographed on one afternoon dive, at a site named Techno Reef: 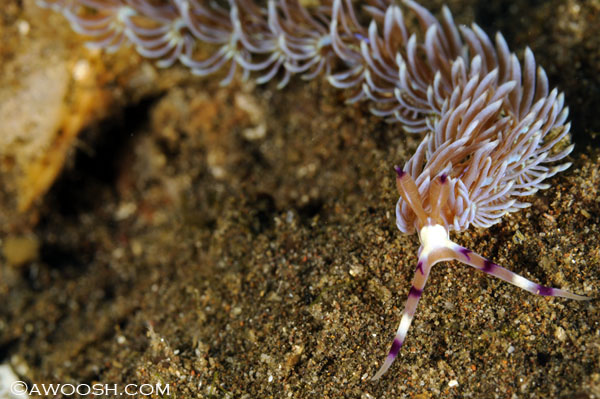 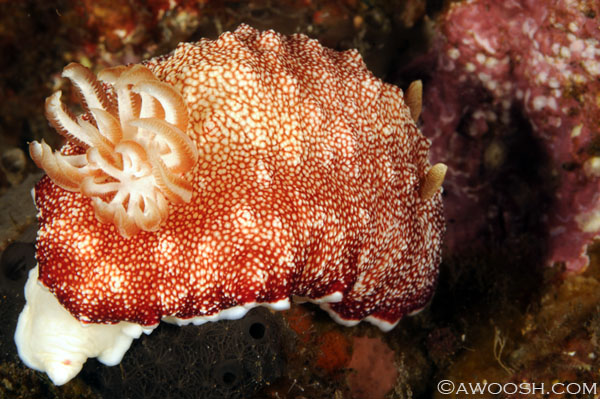 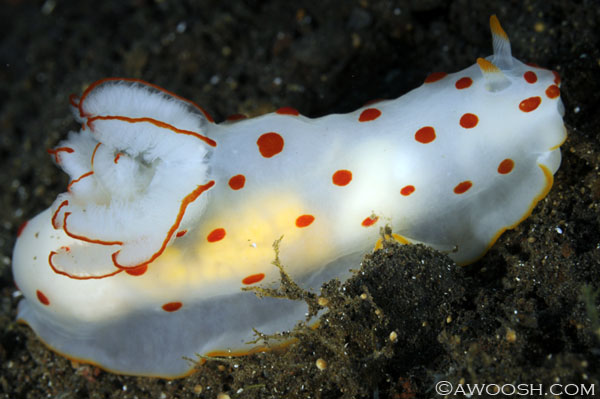 Ceylon Gymnodoris Nudibranch – Gymnodoris ceylonica
Note the large patch of yellow eggs in the abdomen. Likely going to be spooling out an egg ribbon sometime soon. 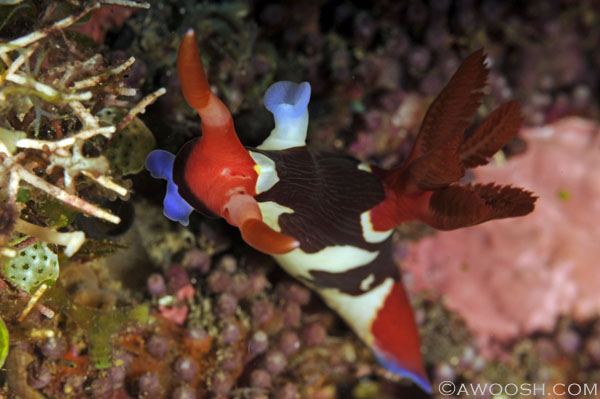 Chamberlain’s Nudibranch – Nembrotha Chamberlaini
Note the mating appartus fully deployed. There was another of this species nearby – this guy/gal was feeling the love… 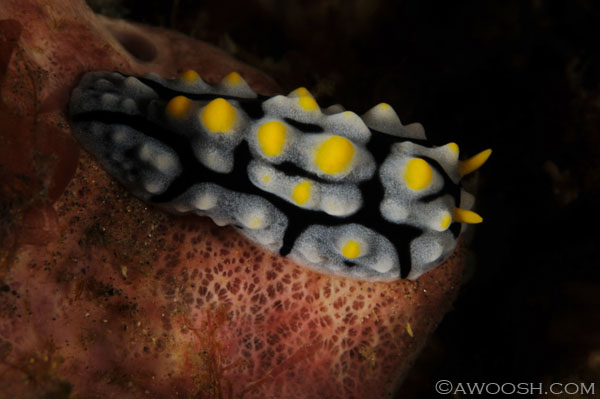 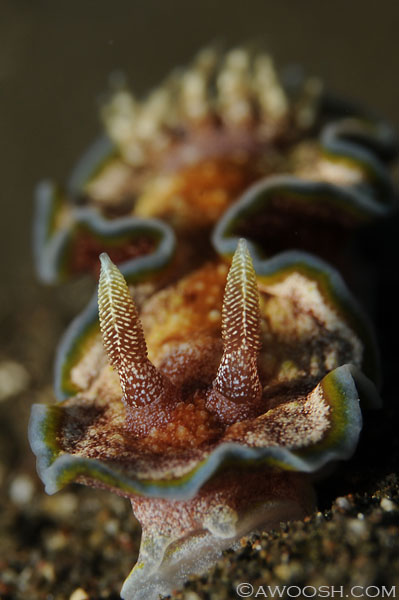 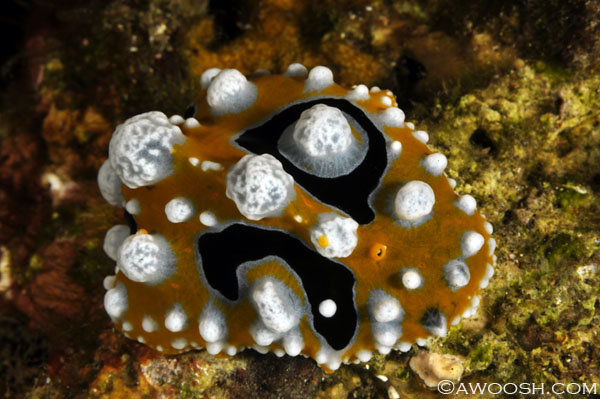 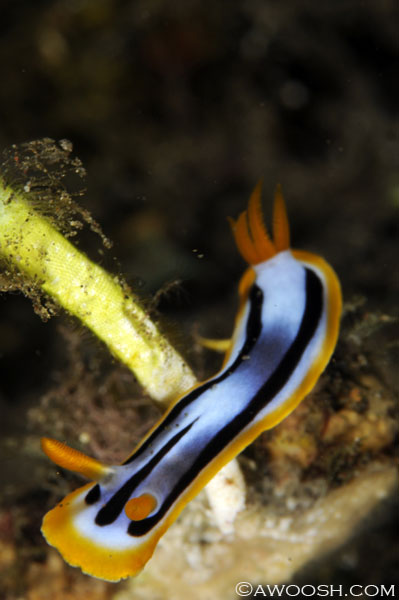 Some sort of Chromodoris Nudibranch I think – from my reference book I am not able to make a definitive identification. 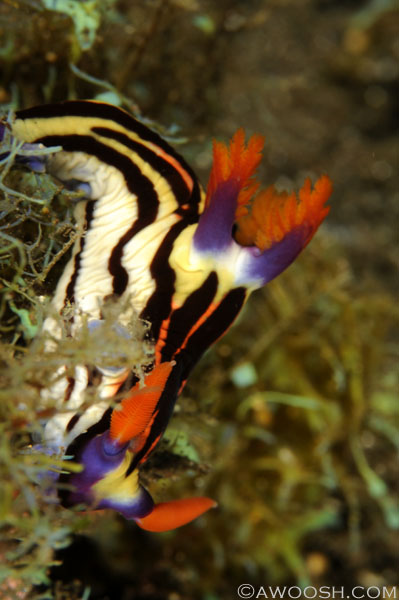 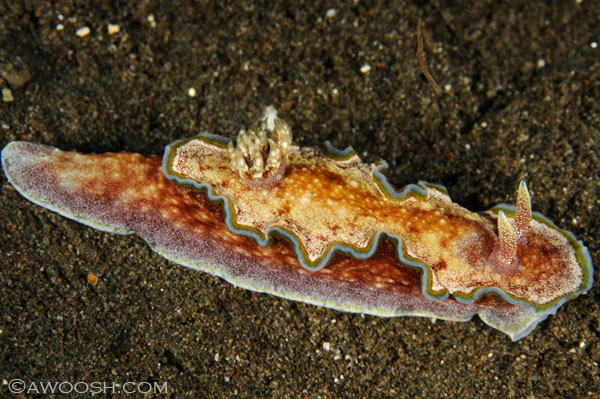 The fully monty – the Glossodoris cinta nudibranch featured above. 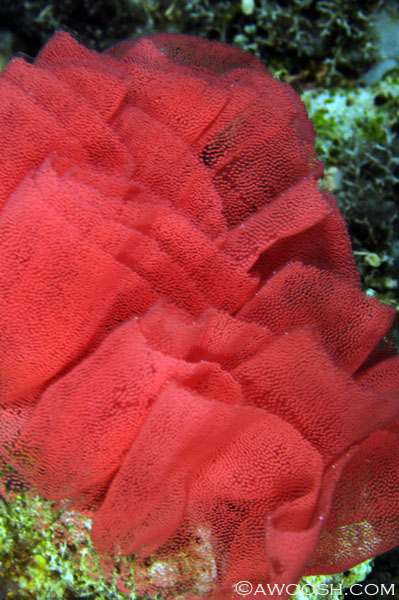 Mama (the glorious Spanish Dancer Nudibranch) had left the scene, but left behind this colourful (and large!) egg ribbon.

Man, that is three dives’ worth of images. So many cool critters. I will save the wild and woolly night dive for the next photo blog, and leave this entry with a few topside pictures of the beautiful Sangeyang Island: 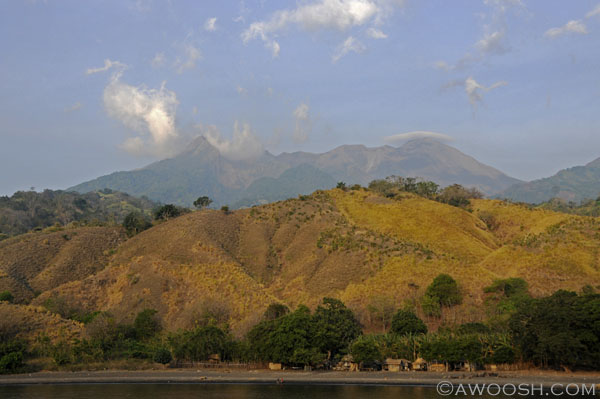 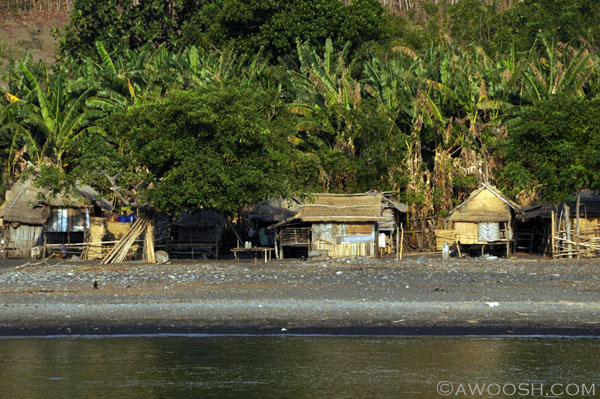 A humble settlement – most of the population of the island (which was apparently never very robust) has been evacuated due to the active nature of the volcano. A few diehards (we were told they were mostly village elders) remain behind, taking their chances… 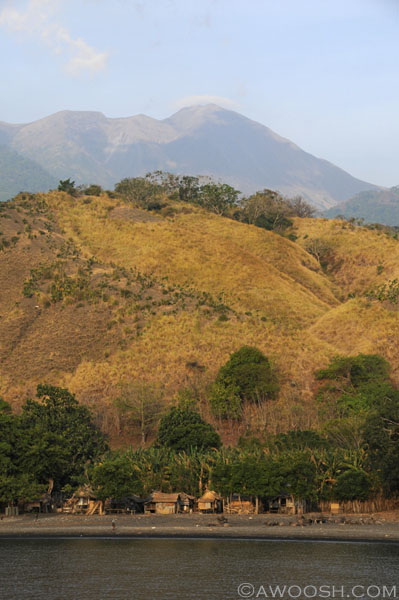 Born and raised on the west coast of Canada, I have always felt a strong connection to the sea. But for many years, I stayed on the surface, afraid of what lurked down deep. When I was in my early 30's, with three young children (aka the P's), my husband (aka Mr G) signed us up for a SCUBA certification course, as a surprise. Although I had my fears, my stubbornness prevailed, and somehow I made it through four murky, frigid, cold water dives in Vancouver to successfully pass the course. Soon after we went diving off the west coast of Mexico, in the Sea of Cortez, where my eyes were opened to the beauty and other-worldliness of the life down under. And the rest, as they say, is history. I currently have well over 2000 dives under the belt, and I have been fortunate to travel extensively in Asia, Australia, Fiji, Galapagos, Costa Rica, California, the Caribbean, Mexico and here in British Columbia. After shooting hefty DSLRs for many years, I just switched over to a groovy Olympus Micro Four Thirds camera, in a Nauticam housing, with dual Sea & Sea strobes and a bag full of lenses. In addition to this blog and my personal website (Awoosh.com/Directory), which is linked at the top of the blog, my stuff has been widely published in a variety of magazines and websites, including an ongoing regular monthly feature on Scubadiving.com. All links to this work can be found in this blog.
View all posts by Judy G Diver →
This entry was posted in All About Scuba Diving, Indonesia Travel, Photography, Trip Reports and tagged Nudibranchs, Sangeyang Island. Bookmark the permalink.