Pic of the Day – Lava Flow 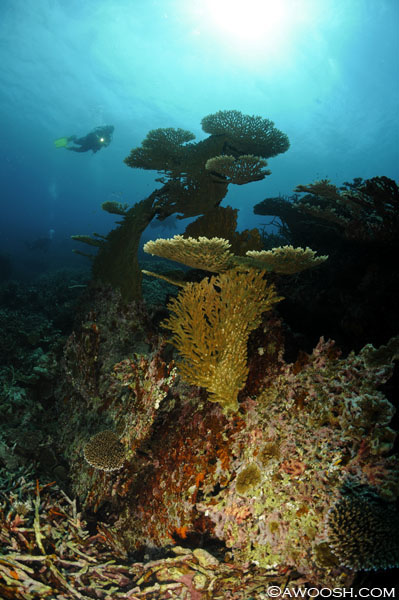 Out of destruction, there is sometimes beauty.

This image was captured at Banda Api, in the Banda Sea area of Indonesia. This dive site is aptly named “Lava Flow”.

In May 1988, Bandi Api volcano (elevation 640 metres/2100 feet) explosively erupted, and the subsequent lava flow made it all the way to the ocean nearby, where it decimated the fringing coral reef.

What is particularly heartwarming, in the aftermath of such destruction, is the reemergence of a beautiful, lively coral garden, growing abundantly in just 25 years.

In the image above, you can see a huge plate coral, which has been knocked over on its side. And out of it, growing like stacked condos, are new smaller coral plates, which form this unique structure.

And here is an image taken on the (new) reef. Check out the dense, healthy corals. Twenty-five years is all it took, in a hospitable environment: 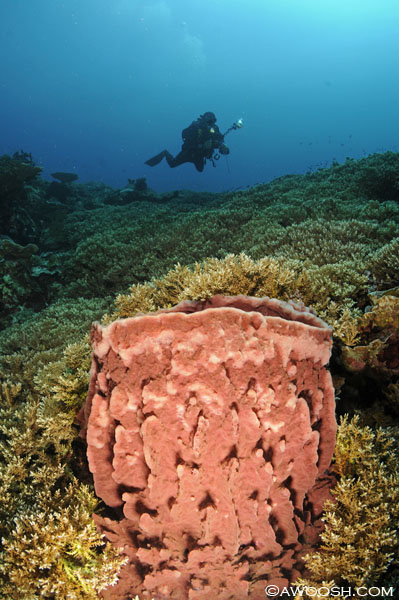 And below is a view taken from the shallows. Who says you can’t do an over/under with a four inch mini dome? ;^) Okay – admittedly it is not a perfect shot (these things are devilishly difficult to expose properly, not to mention only four inches of glass to split in half), but you can see the remnants of the lava flow at the shoreline, and the peak of the Banda Api volcano up behind it. It looks like the ocean healed more quickly than the land after this catastrophic volcanic event. 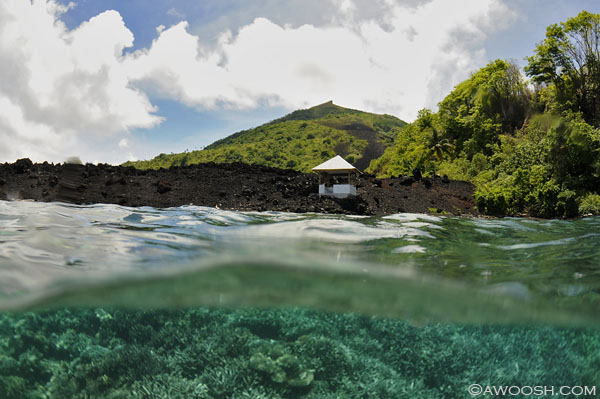 Lava Flow, Over and Under

Born and raised on the west coast of Canada, I have always felt a strong connection to the sea. But for many years, I stayed on the surface, afraid of what lurked down deep. When I was in my early 30's, with three young children (aka the P's), my husband (aka Mr G) signed us up for a SCUBA certification course, as a surprise. Although I had my fears, my stubbornness prevailed, and somehow I made it through four murky, frigid, cold water dives in Vancouver to successfully pass the course. Soon after we went diving off the west coast of Mexico, in the Sea of Cortez, where my eyes were opened to the beauty and other-worldliness of the life down under. And the rest, as they say, is history. I currently have well over 2000 dives under the belt, and I have been fortunate to travel extensively in Asia, Australia, Fiji, Galapagos, Costa Rica, California, the Caribbean, Mexico and here in British Columbia. After shooting hefty DSLRs for many years, I just switched over to a groovy Olympus Micro Four Thirds camera, in a Nauticam housing, with dual Sea & Sea strobes and a bag full of lenses. In addition to this blog and my personal website (Awoosh.com/Directory), which is linked at the top of the blog, my stuff has been widely published in a variety of magazines and websites, including an ongoing regular monthly feature on Scubadiving.com. All links to this work can be found in this blog.
View all posts by Judy G Diver →
This entry was posted in All About Scuba Diving, Photography, Pic of the Day and tagged Banda Api, Lava Flow, Volcano. Bookmark the permalink.

2 Responses to Pic of the Day – Lava Flow