Pic of the Day – Flying Gunard 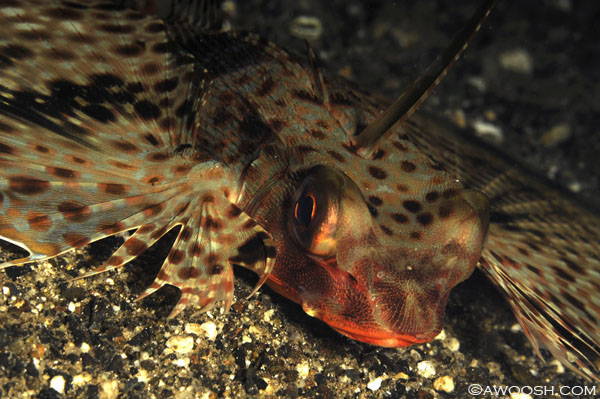 So I’ll take a break today from the crabby parade, and instead offer up a Friday funny fish face.

This creature is a Flying Gunard (Dactyloptena orientalis). It is one of several strange “creeping” fish that can be found in the tropical Pacific.

Not so much a swimmer, it “walks” along the bottom on two pelvic fin/legs. It will lift off and swim if startled, with those huge wingy pectoral fins fully deployed. A very strange fish indeed.

These images were captured on a night dive in a mucky bay, in an island group in the Banda Sea. This fish was about 12 inches long, and was the first and only one of these things that I have seen in several trips to Indonesia.

Edited to add: The cousin of this weird Indo fish, Dactyloptenan orientalis, is Dactyloptenan volitans, which can occasionally be spotted in the Caribbean, Bahamas etc. I have seen only one in that part of the world, despite many dives there – in Turks & Caicos (I think). Couldn’t get close enough to get a picture. A skittish fish for sure… 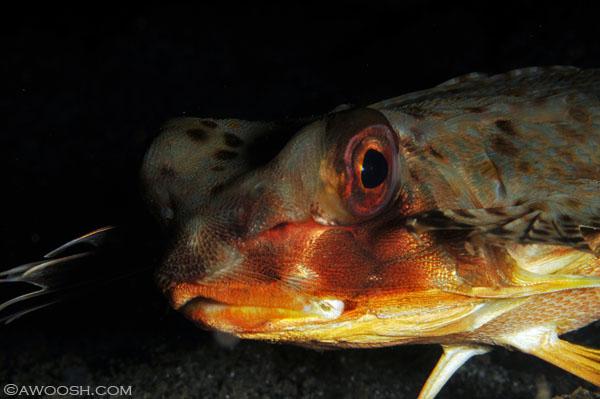 Born and raised on the west coast of Canada, I have always felt a strong connection to the sea. But for many years, I stayed on the surface, afraid of what lurked down deep. When I was in my early 30's, with three young children (aka the P's), my husband (aka Mr G) signed us up for a SCUBA certification course, as a surprise. Although I had my fears, my stubbornness prevailed, and somehow I made it through four murky, frigid, cold water dives in Vancouver to successfully pass the course. Soon after we went diving off the west coast of Mexico, in the Sea of Cortez, where my eyes were opened to the beauty and other-worldliness of the life down under. And the rest, as they say, is history. I currently have well over 2000 dives under the belt, and I have been fortunate to travel extensively in Asia, Australia, Fiji, Galapagos, Costa Rica, California, the Caribbean, Mexico and here in British Columbia. After shooting hefty DSLRs for many years, I just switched over to a groovy Olympus Micro Four Thirds camera, in a Nauticam housing, with dual Sea & Sea strobes and a bag full of lenses. In addition to this blog and my personal website (Awoosh.com/Directory), which is linked at the top of the blog, my stuff has been widely published in a variety of magazines and websites, including an ongoing regular monthly feature on Scubadiving.com. All links to this work can be found in this blog.
View all posts by Judy G Diver →
This entry was posted in All About Scuba Diving, Photography, Pic of the Day and tagged Dactyloptena orientalis, Flying Gunard. Bookmark the permalink.