A Passage in India (& Nepal) – Part 3 – Worlds Colliding in Jaipur 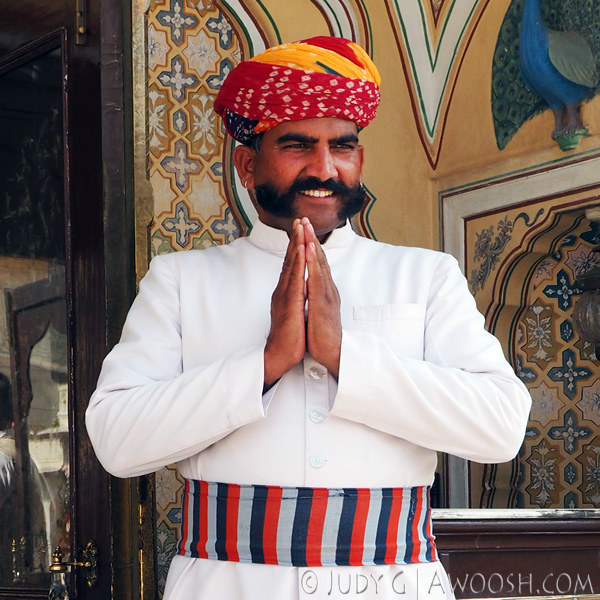 So, we’ve left Delhi, and are now on the big bus for the long drive to Jaipur – the pink city.

If you missed the previous India blogs, they are here:

Delhi to Jaipur was a long haul, with hours of peering out the side windows of the bus, watching India whizz by. I kept my camera at the ready, hoping to capture some of the scenery. As I mentioned earlier in this thing, shooting out of the side window of a fast moving bus is not very satisfactory, but I did manage to get a few decent pix to try to illustrate the experience. 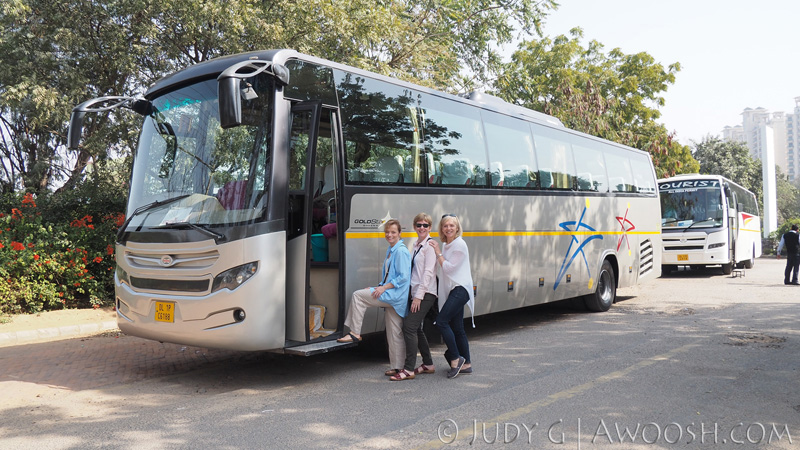 The girls on the bus

Here is a map that I peeled off the internet to show where the heck we were, although it indicates the reverse route of the one we took. We started in Delhi, then went to Jaipur, and then to Agra, where the wondrous Taj Mahal is located. The time and distances we traveled by bus seemed much greater than the short connecting lines on the map: 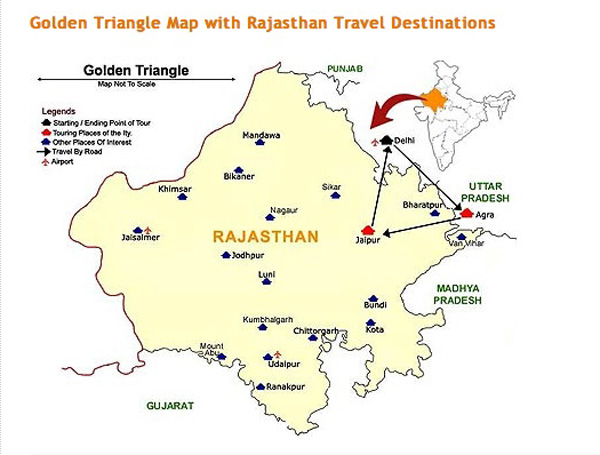 Just south of Delhi, really a suburb, is a new city – Gurgaon – layered over an ancient village. Gurgaon has now emerged as a super modern metropolis – a bastion of the emergent Indian middle class, and a major centre for technology business in northern India. Apparently call centres galore are located here. It is a pretty wild contrast between this uber modern city and the dusty countryside dotted with humble villages just beyond it. 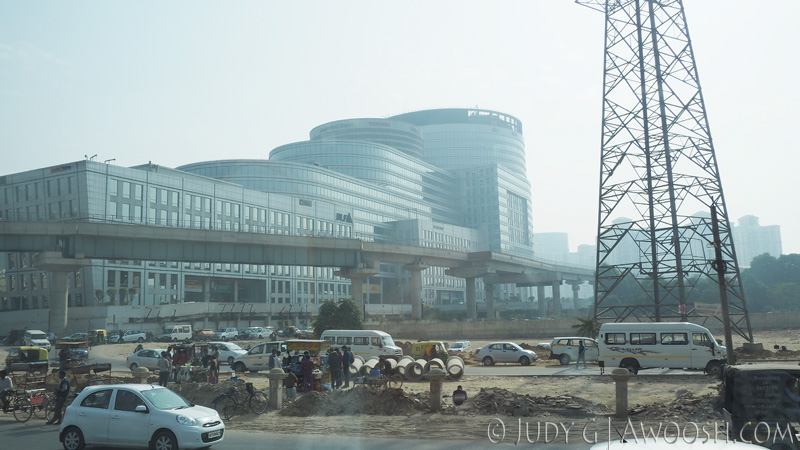 We stopped a couple of times on the way for potty and refreshment breaks. Finding a bathroom clean enough for western sensibilities (just say no to grotty squatters!) is challenging in India, but Bonnie has the inside scoop on these kinds of details, and it was all good. The first stop was at a MacDonalds of all places – and we were amused by the veggie menu board, which included paneer (a type of curdy cheese) burgers, and not a bite of beef in sight. I tried to take a pic, but was prevented by the manager. Not really sure why – it’s not like veggie MacDonald’s are going to compete in North America ;^)

Here are a few shots from this day’s driveby shooting. They are not technically great (moving bus, shooting through windows, etc), but I think they share the flavour of the scenery along the way from Delhi to Jaipur: 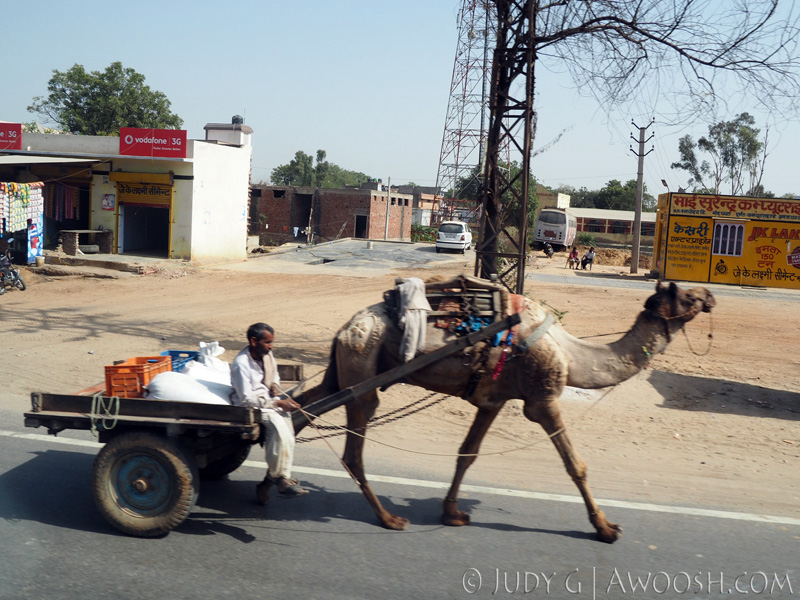 Big excitement when we saw our first camels. 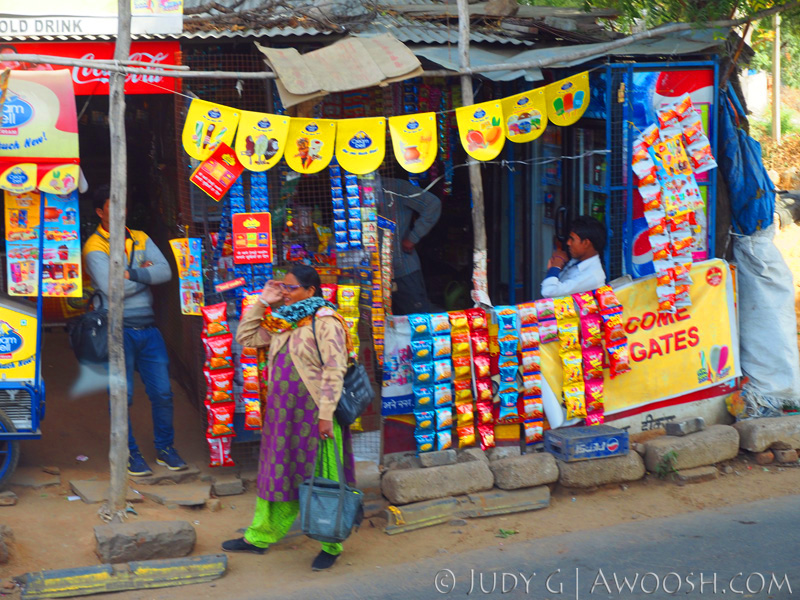 These colourful little stands are everywhere in India.
Kind of like a corner store, selling snacks, drinks etc. 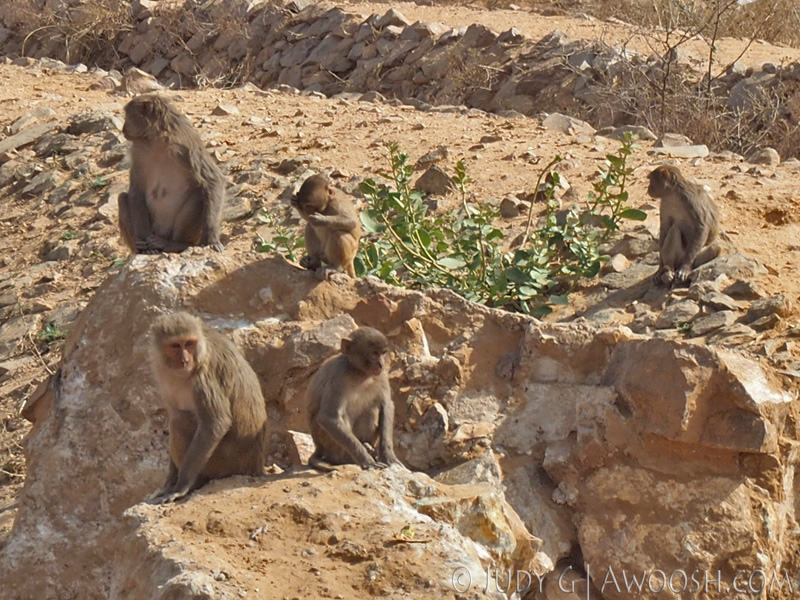 Monkey mania.
There were scores of these furry little devils, in an encampment right next to the highway. 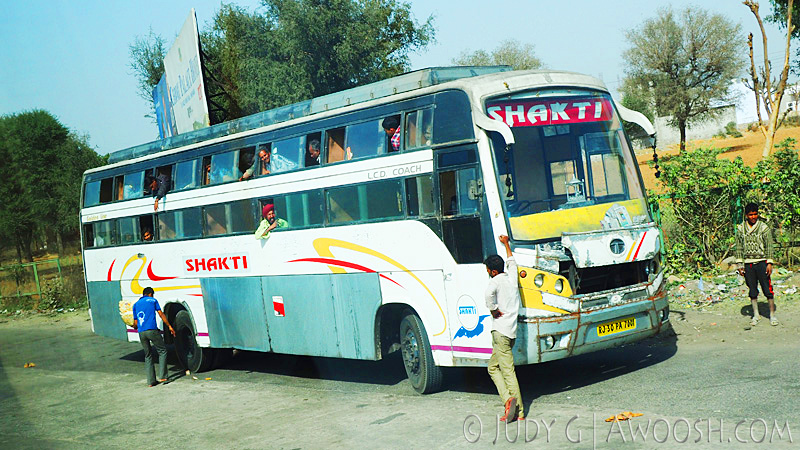 The wheels on this bus aren’t going round and round.
Broken down buses and trucks litter the sides of the highways in India.
Check out the double decker layer on this one! 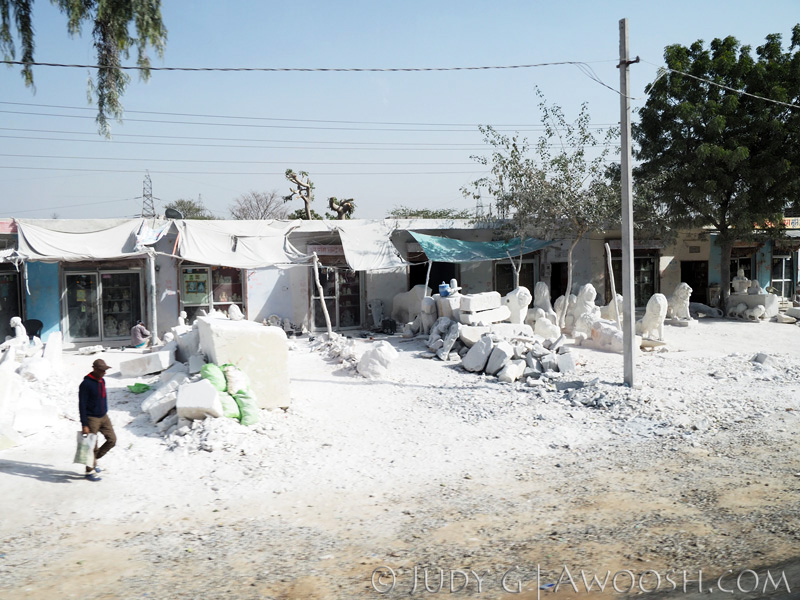 We saw quite a few of these marble carving yards between Delhi and Jaipur and between Jaipur and Agra. We also saw similar workshops for red sandstone carving. Statuary is big in the Hindu culture. 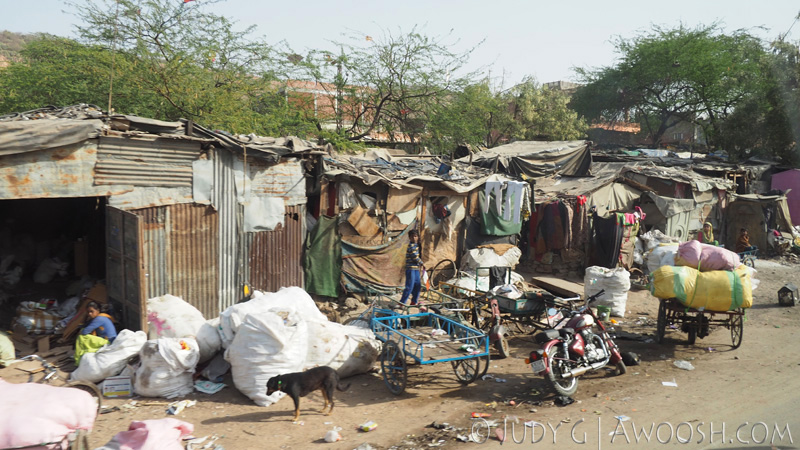 Situation normal in the outskirts of the cities we visited.

As we approached Jaipur, we started to see a lot of colourful buildings. Jaipur is known as the pink city due to much of the Old City being painted a soft pastel pink/orange for a visit from some British royalty, way back when. Apparently pink was the Prince of Wales’ favourite colour ;^)

After the long day of travel, we were happy to hit the hotel, head to the gym, snork back a couple of excellent Indian beers, plus some wonderful dal and naan bread, and hit the hay. The next day was going to be another full one. 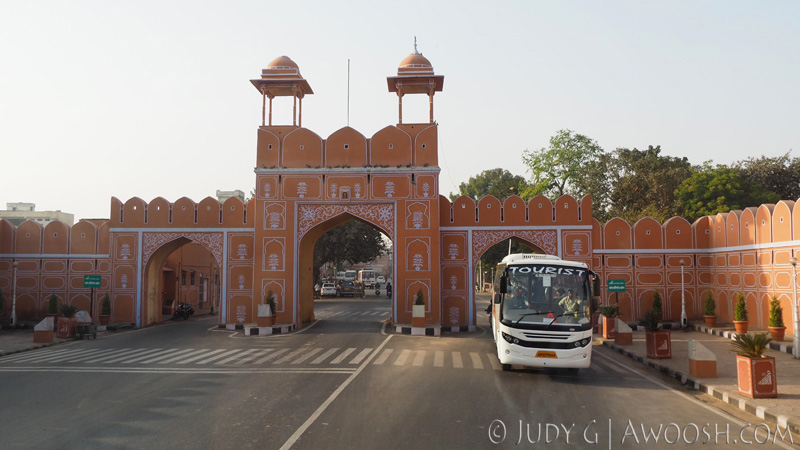 A tourist bus squeezes through one of the four main gates of the old city of Jaipur.

Back on the bus, for the twenty minute drive from downtown Jaipur to the Amer (also sometimes called Amber) Fort. We were heading there fairly early in the morning, to line up to ride elephants up the steep hill to the palace on high. Some of us were dubious about the elephant thing – we were worried about the mistreatment of these animals. As it ends up, it appears that they have a pretty good life. They work from 9 until noon, and then are done schlepping tourists up the hill. They may also be rented out for weddings, as it is a sign of prosperity for the groom to show up for the festivities riding a painted elephant. The animals look well fed and cared for, and I didn’t see any signs of brutality on the part of the drivers. 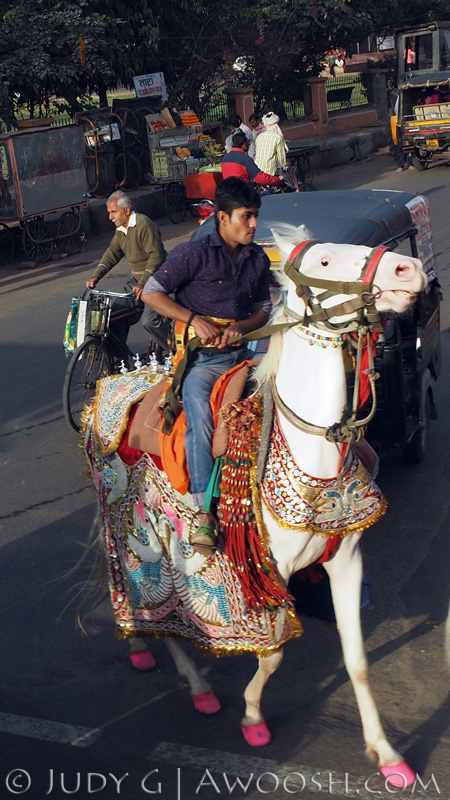 Whoa Nelly! Check out the pink hooves!
I  believe this horse is decorated for a wedding. 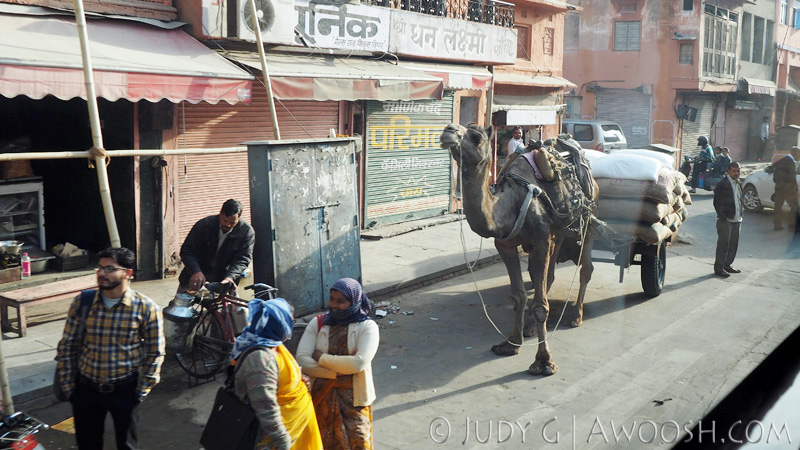 The Amer Fort is a huge, imposing structure, built strategically high on a hill. Construction began in 1592, and it is mostly made of sandstone. It is a super popular attraction for tourists – Indian and Western – as evidenced by the massive, serpentine queue of folks who lined up to cop an elephant ride up to the fort. Jaipur itself is a major destination for Indian weddings, and we were there in the wedding season, so saw many highly decorated venues, grooms on painted elephants or decorated white horses, and parades of brides. 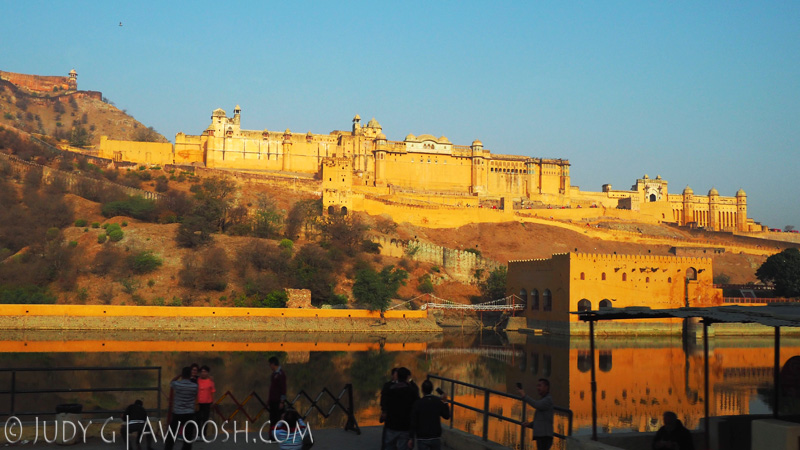 Amer Fort, with its lake in the foreground. 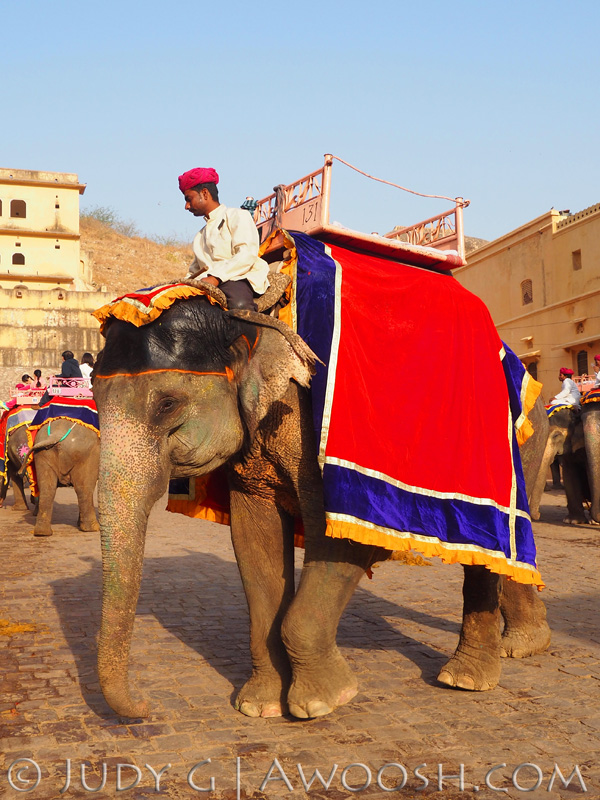 Traffic Jam at the Amer Fort. 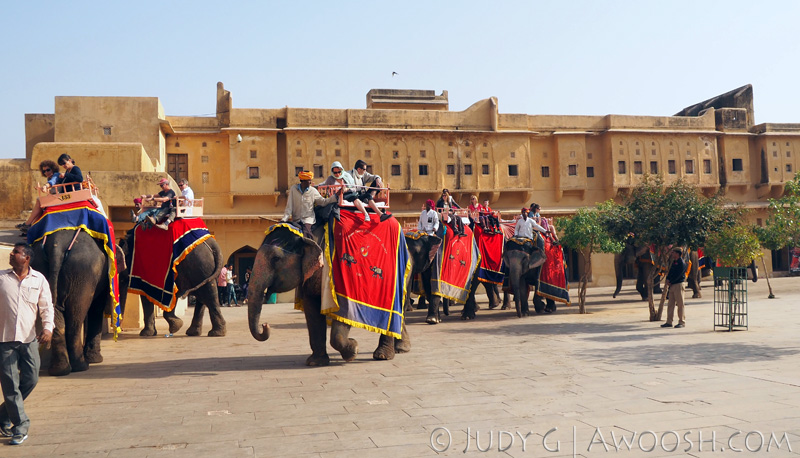 Elephants depositing their burdens into the grand square. 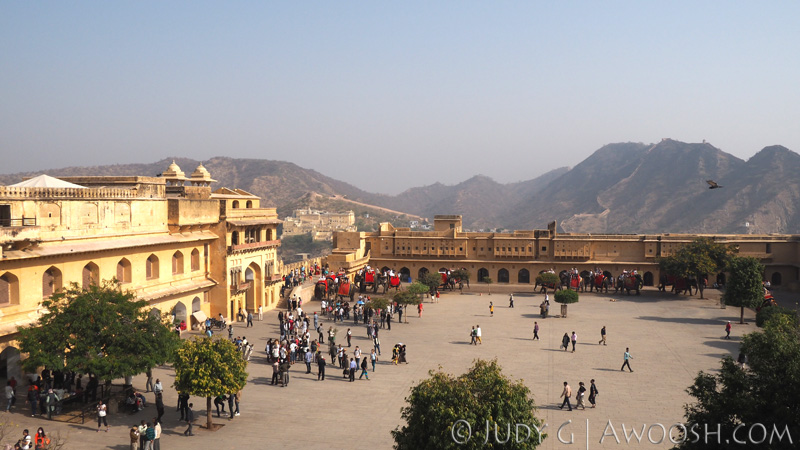 View looking down to the grand square from the palace grounds. 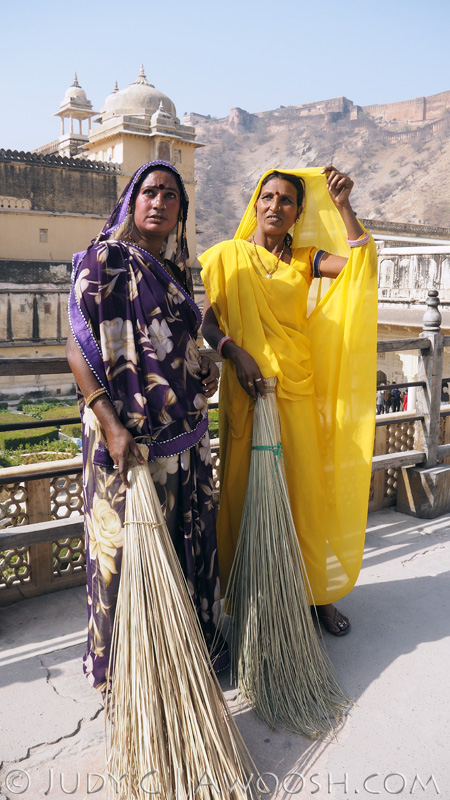 For a modest fee, these ladies will pose for photographs ;^) 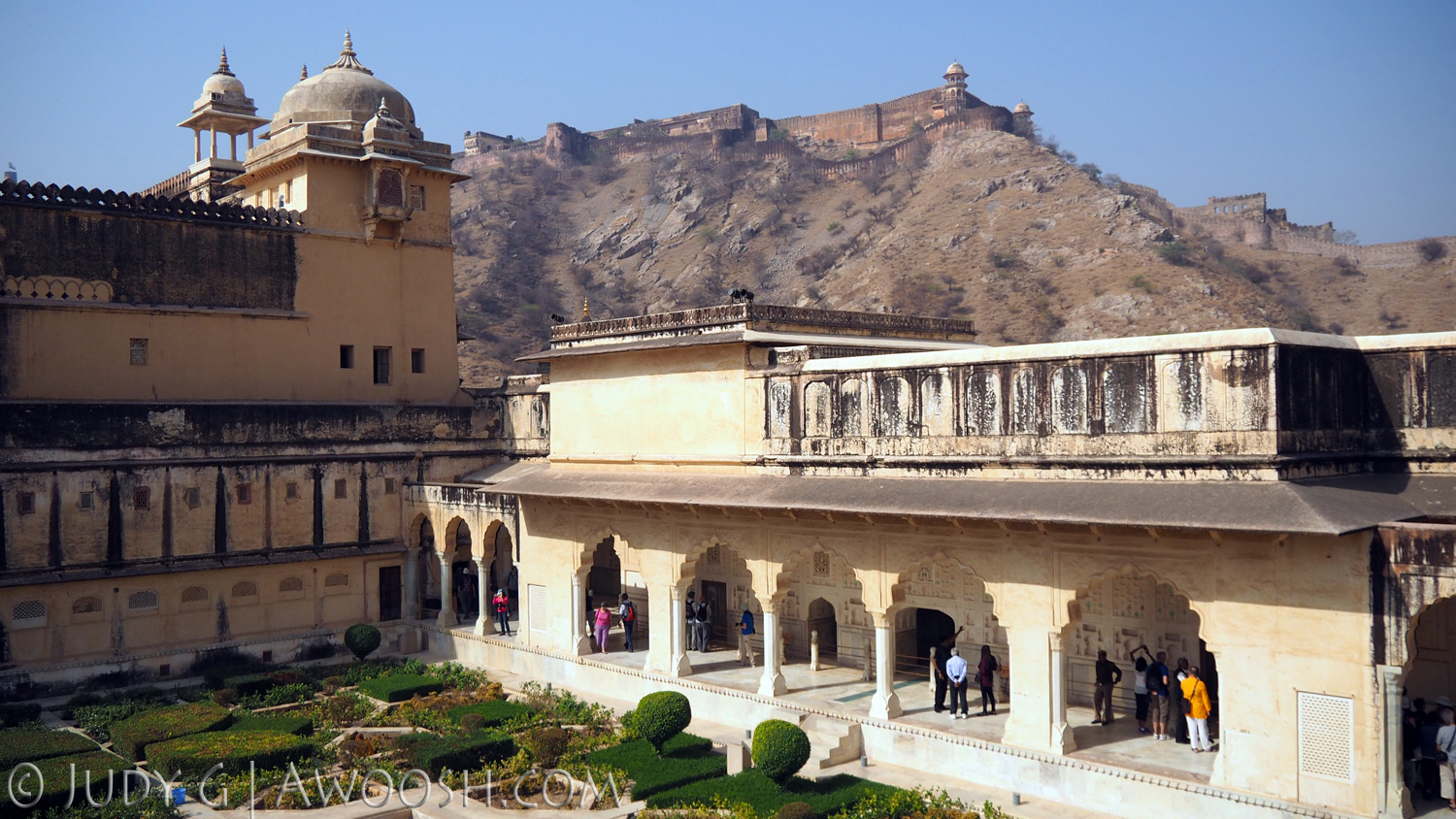 Looking up to the original Amer Palace, built even higher up in the hills.
Formal palace gardens in the foreground.

Once we had toured the large site, we were picked up on the other side for a wild jeep ride down some very steep and narrow streets, back to the bus parking area. It was the first of several occasions when I thought we might actually become statistical tourist fatalities in India.

Driving back towards Jaipur, we stopped for a few minutes to view (from a distance) the beautiful Water Palace, surrounded by a manmade lake. The lake was created in the late 1500’s, as a water reservoir for the area of Jaipur, which until then struggled with chronic water shortages. The palace is designed to allow the water level to rise and fall on and through its walls. 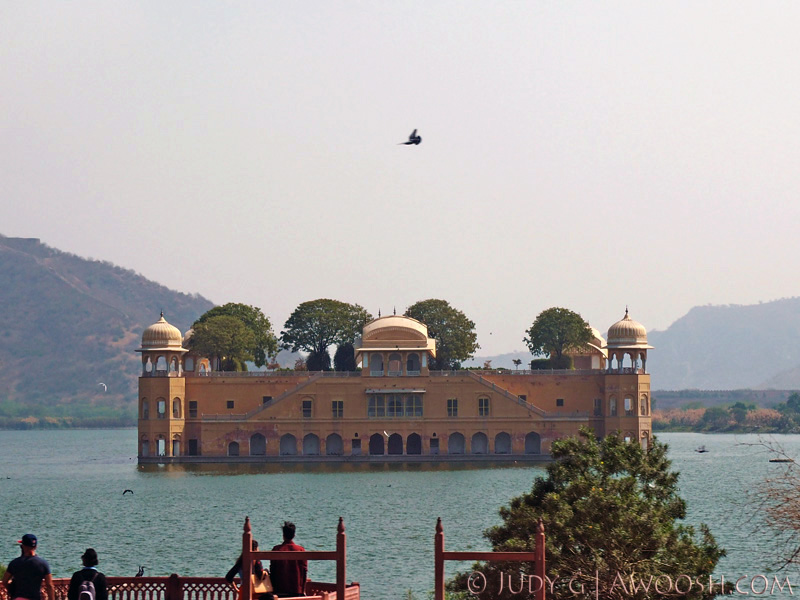 Our next stop was at a jewelry workshop and  large showroom. Jaipur is famous for is gemstones and jewelry making. Seeing a demonstration of gem cutting, which is done by highly skilled workers with very rudimentary tools (basically unchanged in centuries) was interesting. Avoiding the charming and persistent sales staff was hard work. 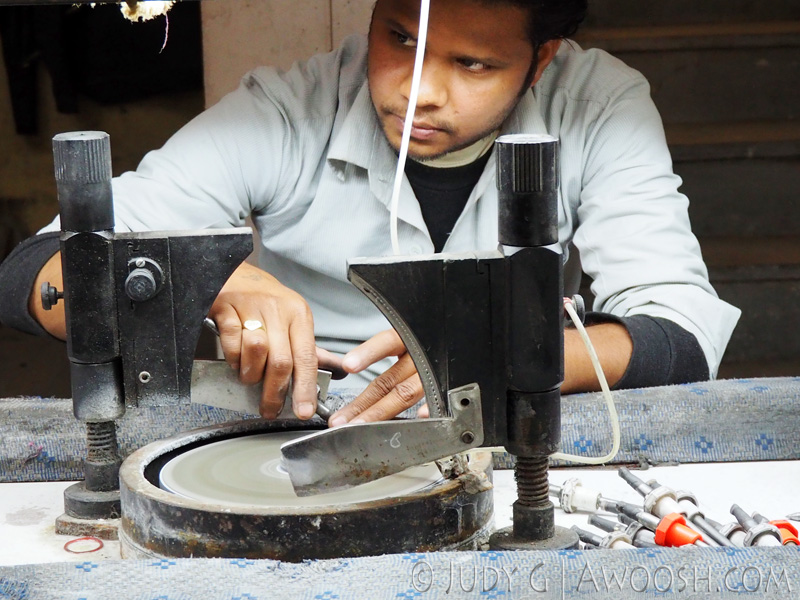 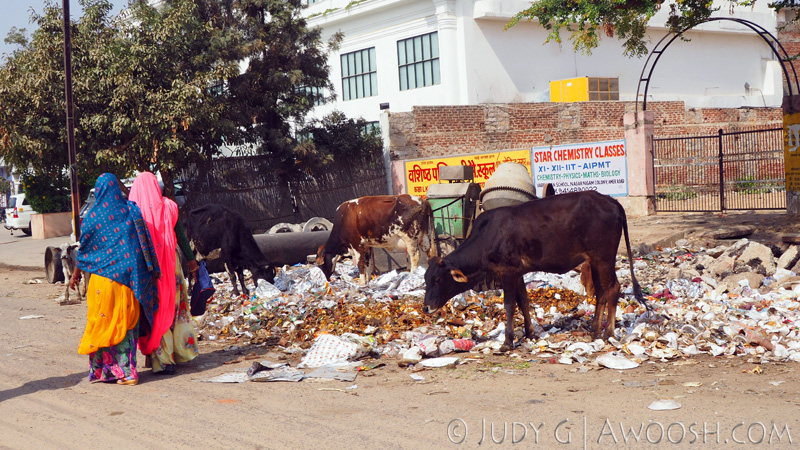 Typical side street in Jaipur. This was just outside the very posh jewelry emporium. Seeing cows, dogs and monkeys feasting on garbage is a common sight in India. 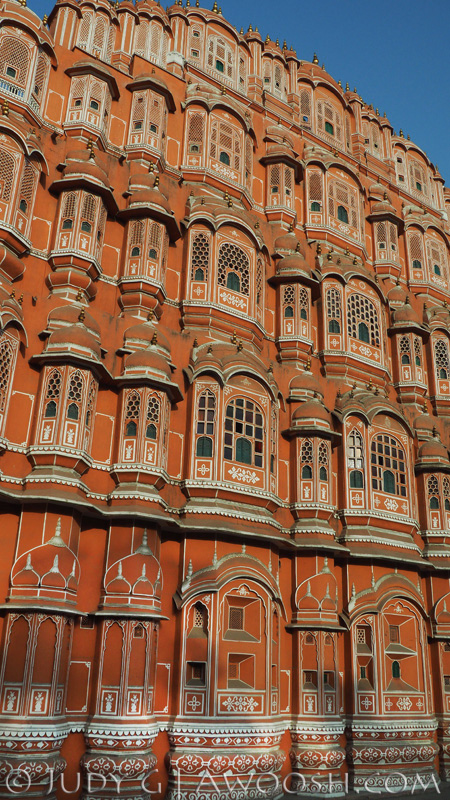 Hawa Mahal – Palace of the Winds – the city palace in Jaipur

And this, dear reader, is where ‘the worlds colliding’ I alluded to in this chapter’s title happened. After being let loose from the brief formal tour, we were winding our way up one of the many stone stairwells – truly – this palace is like some sort of labyrinthine puzzle, with stairways and private viewing points out over the city, and a kazillion little rooms. I rounded a tight corner and literally ran into one of my daughter’s ex-boyfriends. I mean, seriously? Half way around the planet, in a country of over one billion people, in a city with a population of over three million (and with a huge number of tourists also visiting), in a massive palace of a place. Half a minute more, or less, and I never would have seen him. It kind of rocked my world for a day or two. Crazy! 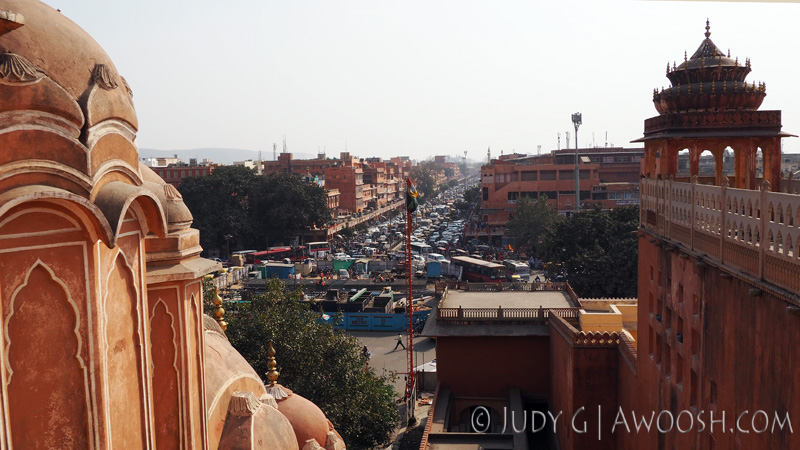 View from the Palace of the Winds down to the streets of Jaipur.
Check out the traffic gridlock. 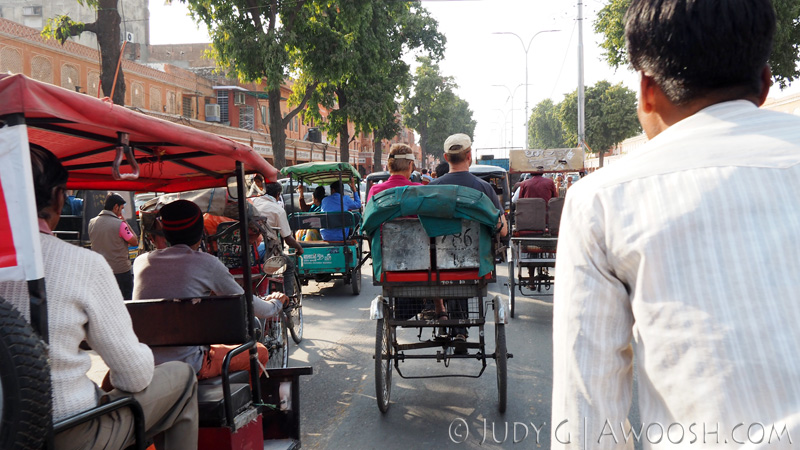 Rickshaw tour of the old city. This is the second time in a day that I thought there was a good chance we would get smoked in a traffic accident. I’ve got to say that the rickshaw drivers are very energetic and artful and manage to negotiate the busy streets very cleverly.

Our last stop for the day was at a Jaipur region textiles co-operative. The government of India is working hard to keep the ancient arts alive, and this includes textiles. The hope is to keep the artisans in their villages, as overcrowding in Indian cities has become a huge social problem. Artisan co-operatives allow a main venue for regional arts to be demonstrated, and sold. We visited a similar market in Delhi, where we were shown some beautiful silk carpets loomed in Kashmir – in northern India. Tourists aren’t going to Kashmir these days, due to violent political turmoil, so without co-operatives in cities like Delhi to sell the carpets, it would be an even further hardship for the artisans of Kashmir. 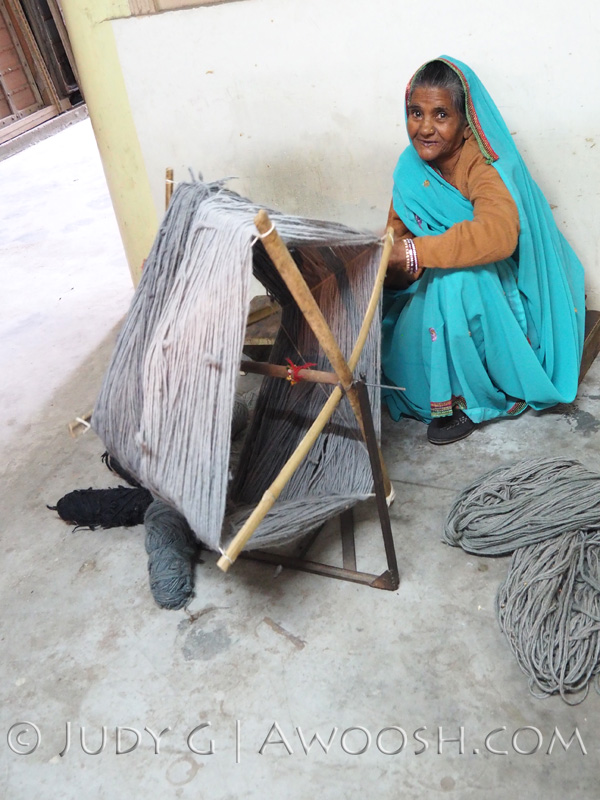 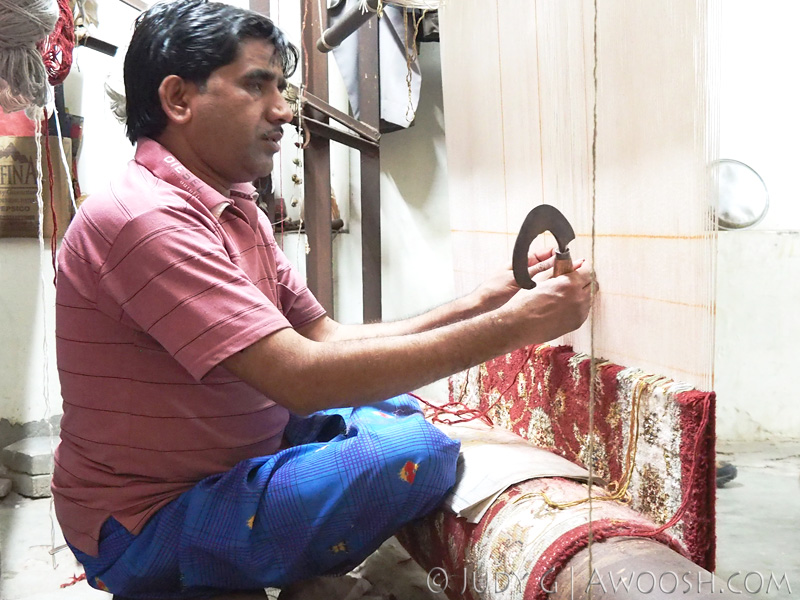 Carpet weaving demonstration. Each knot is hand tied. High quality Indian carpets have 400 knots per square inch. A carpet runner like these can take months to complete, and the labor is highly skilled. 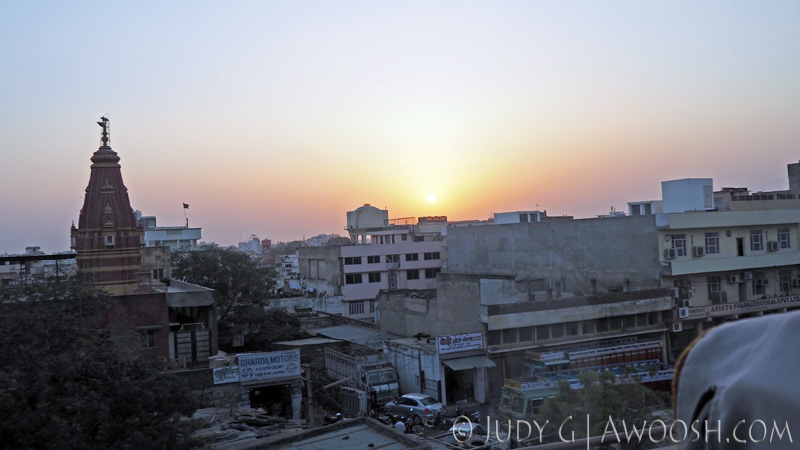 Born and raised on the west coast of Canada, I have always felt a strong connection to the sea. But for many years, I stayed on the surface, afraid of what lurked down deep. When I was in my early 30's, with three young children (aka the P's), my husband (aka Mr G) signed us up for a SCUBA certification course, as a surprise. Although I had my fears, my stubbornness prevailed, and somehow I made it through four murky, frigid, cold water dives in Vancouver to successfully pass the course. Soon after we went diving off the west coast of Mexico, in the Sea of Cortez, where my eyes were opened to the beauty and other-worldliness of the life down under. And the rest, as they say, is history. I currently have well over 2000 dives under the belt, and I have been fortunate to travel extensively in Asia, Australia, Fiji, Galapagos, Costa Rica, California, the Caribbean, Mexico and here in British Columbia. After shooting hefty DSLRs for many years, I just switched over to a groovy Olympus Micro Four Thirds camera, in a Nauticam housing, with dual Sea & Sea strobes and a bag full of lenses. In addition to this blog and my personal website (Awoosh.com/Directory), which is linked at the top of the blog, my stuff has been widely published in a variety of magazines and websites, including an ongoing regular monthly feature on Scubadiving.com. All links to this work can be found in this blog.
View all posts by Judy G Diver →
This entry was posted in Photography, Travel, Trip Reports and tagged Amer Fort, Bicycle Rickshaw, Golden Triangle, India, Jaipur, Rajasthan, Water Palace. Bookmark the permalink.