Pic of the Day – Reeftop Pipefish 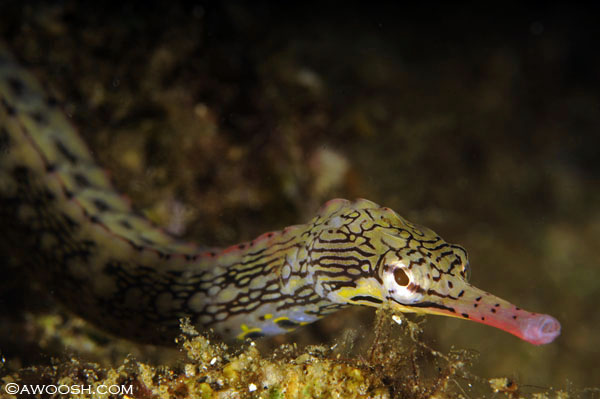 Just a quickie for a Friday Funny Fish Face. I am currently writing and assembling pix for a July Sport Diver Magazine feature. It’s gonna be all about groovy little stuff, found in unpretty places. Yup, that would be muck diving.

I am a fairly new convert to the joys of muck diving. For many years, early in my diving life, I really was all about the big picture. So, it is no great surprise that when I started to take images underwater, I focussed on wide angles – trying to capture, and share, the incredible beauty of undersea reef structure and scenes.

As I got more proficient with flash photography (now there was a learning curve ;^), I started focussing in on mid-range lens fish portraiture as well – which can be very challenging as most fish are not very cooperative subjects, and initially I was shooting an Oly 4040Z digicam, which had a significant shutter lag after autofocusing on a subject. Whatever macro I shot was limited to stuff I could find on my own (not yet having been treated to the joys of a sharp-eyed spotter) so mostly British Columbia and California nudibranchs, many of which are quite large.

I have confessed previously to my significant, age onset presbyopia, which sadly means that focussing on near stuff is pretty much a no go for me these days. It has deteriorated so much over the past 20 years that I am totally hooped if I can not find my reading glass (+5 these days!!!). This is a sad departure from having better than 20/20 in my early twenties. Skiing without adequate eye protection, and a lot of reading by flashlight under the covers as a kid are apparently the culprits…

Anyhoo, fast forward a decade or so from first being certified, and I realized that I was missing out on a lot of cool stuff. So I got me a dive mask with diopters installed (not a perfect correction for my vision issues, but a great help – stock diopter lenses available through Tusa), and a macro lens and a viewfinder for my underwater camera. The first few outings with the new lens were pretty discouraging – in auto focus a 105mm lens is a frustrating thing, especially underwater where typically you, as photographer, are moving (current, continuous position adjustments), and the subject is often moving too. I had a heck of a time getting the lens to focus under these conditions, so I threw it back in my camera bag, and let it collect dust.

It was not until our first trip to Indonesia in 2008, which was also my first introduction to ‘muck diving’, that I dusted off the lens and gave it another whirl. Offered some excellent advice by the ever-generous and very talented Linda Cline, I set the thing to manual focus, and that worked for me.

Our intro to muck diving was at Scuba Seraya, in the Tulamben area of Bali. Guides accompanied us on every dive, and were so helpful at finding cool stuff to shoot. I was like a kid in a candy store ;^)

Since then, despite the vision issues, I have become a lot more adept at finding small stuff myself. It comes down to looking for movement and/or colour differences on the reef. Once I think I see something, I view it through my camera viewfinder and macro lens – and then I can really see what it is.

This reeftop pipefish (Corythoichthys haematopterus) was not so tough to spot – a very slender fish (about as wide as a pipe cleaner), but growing up to seven inches long, they are fairly common in the tropical Pacific. This one was captured in Banda Bay (muck dive), at Banda Island in Indonesia. Mr G and I were on our own after our group splintered on a mandarin fish night dive. I can’t remember which one of us spotted it first, but we both had an opportunity to photograph this lovely fish, which was very obliging by perching on the top of a bit of rubble, even though it was in constant motion.

Born and raised on the west coast of Canada, I have always felt a strong connection to the sea. But for many years, I stayed on the surface, afraid of what lurked down deep. When I was in my early 30's, with three young children (aka the P's), my husband (aka Mr G) signed us up for a SCUBA certification course, as a surprise. Although I had my fears, my stubbornness prevailed, and somehow I made it through four murky, frigid, cold water dives in Vancouver to successfully pass the course. Soon after we went diving off the west coast of Mexico, in the Sea of Cortez, where my eyes were opened to the beauty and other-worldliness of the life down under. And the rest, as they say, is history. I currently have well over 2000 dives under the belt, and I have been fortunate to travel extensively in Asia, Australia, Fiji, Galapagos, Costa Rica, California, the Caribbean, Mexico and here in British Columbia. After shooting hefty DSLRs for many years, I just switched over to a groovy Olympus Micro Four Thirds camera, in a Nauticam housing, with dual Sea & Sea strobes and a bag full of lenses. In addition to this blog and my personal website (Awoosh.com/Directory), which is linked at the top of the blog, my stuff has been widely published in a variety of magazines and websites, including an ongoing regular monthly feature on Scubadiving.com. All links to this work can be found in this blog.
View all posts by Judy G Diver →
This entry was posted in Indonesia Travel, Photography, Pic of the Day and tagged Banda Sea scuba diving, Corythoichthys haematopterus, Reeftop Pipefish. Bookmark the permalink.