Pic of the Day – Jellyfish 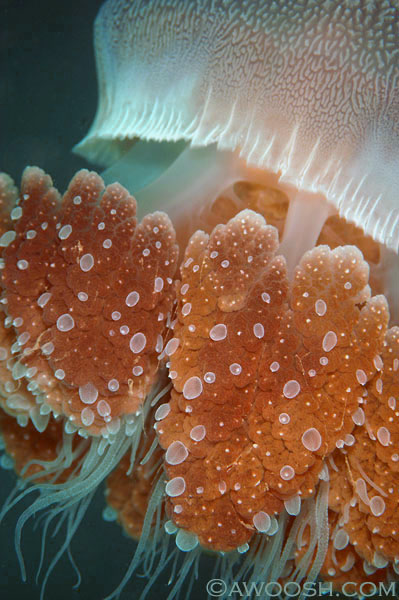 I will admit that I have a fascination for jellyfish. I think it has something to do with their movement – I find the pulsation with which they propel themselves through the water to be very poetic.

Unfortunately, my Tropical Pacific fish and reef creature identification books don’t cover jellies, so I am not able to make a positive identification of this creature. I did dig a bit online trying to match it, but the closest I could find was a White Spotted Jellyfish (Phyllorhiza punctata), with which it shares a similar form, but it lacks the white spots on its mantle.

Factoids about jellyfish – they have no organs – no brain, no heart, and no eyes (with the exception of the extremely toxic box jellyfish which has four real eyes. Seriously). Yet they are very much alive. Lately, there has been an effort to rename them sea jellies, as they are not fish at all; instead they are a gelatinous, fairly simple organism, with many subspecies. They are found pretty much everywhere there is salt water, including in some marine lakes in Asia, where they have evolved to be quite benign with regards to envenomation, so snorkelers can safely enjoy close encounters with hundreds of these otherworldy creatures.

Almost all jellies have some degree of venom (delivered by stinging cells, known as nematocytes), so I always approach cautiously, most especially with varieties that have long trailing tendrils. Some of them are hyper-toxic, including varieties of the box jellyfish noted above, and stings from some of these jellies can be life-threatening. And then there is the notorious Irukandji, commonly found in Australia. This is truly a killer – it has been known to cause serious illness and sometimes death to waders and swimmers off the beaches of Australia. And the really scary part? They are so tiny that they are almost invisible to the human eye. Difficult to avoid that which you can not see.

So call me cavalier, I guess, for being a diver who does not shy away from these possibly harmful creatures ;^) But, really, I’m pretty much covered head to toe in layers of neoprene, including a full hood – just a bit of my face, between my mask and my reg, is at risk. I’ve had a few minor stings over the years when some unseen little jelly and I ran into each other. Many places don’t allow gloves for fear that divers will paw fragile reef (with good reason – been there, seen that), but I always wear them when I am permitted. I don’t use them to get grabby, just to protect my hands (and help keep them warm).

And it’s not like the ocean is thick with jellies. Well, maybe except when they bloom. I’ve only seen one of those – a constellation of moon jellies in a deep inlet in the Queen Charlotte Islands of British Columbia. And I was in a boat :^) 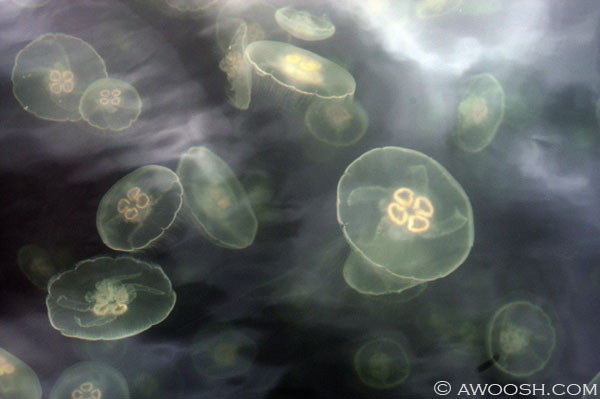 According to stuff that I read today when trying to identify the critter, jellyfish react to human skin, and don’t fire their stingers unless they touch it. So any kind of barrier apparently does the trick – dive/snorkel/swim skins, pantyhose, wetsuits etc.

Most jellyfish stings can be significantly mitigated by the application of vinegar, which neutralizes the nematocytes. Always a good idea to have a supply nearby when dipping in the ocean – jellies, of one kind or another, are pretty much everywhere in the world. And even if not life-threatening, the stings can be very painful. By the way, the old wives’ tale about applying urine on a sting is found to be bogus. Vinegar is apparently the thing.

These jelly images were captured on a dive off of Ambon Island, in Indonesia. It was quite a large creature – about 10 inches in diameter across its dome.  I noted that there were several small silver fish, apparently camping out under its mantle, and the thing had very short tendrils, so I am wondering whether it is one of the more benign varieties. 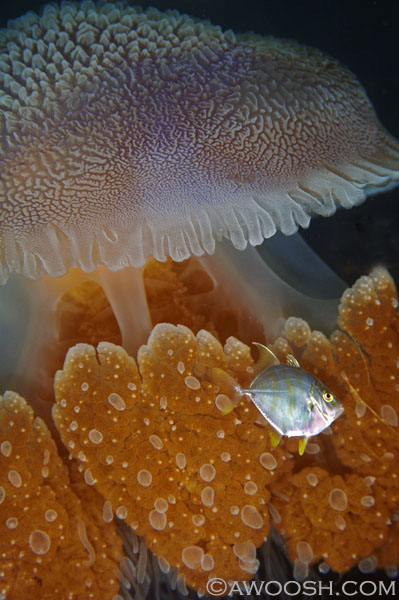 Born and raised on the west coast of Canada, I have always felt a strong connection to the sea. But for many years, I stayed on the surface, afraid of what lurked down deep. When I was in my early 30's, with three young children (aka the P's), my husband (aka Mr G) signed us up for a SCUBA certification course, as a surprise. Although I had my fears, my stubbornness prevailed, and somehow I made it through four murky, frigid, cold water dives in Vancouver to successfully pass the course. Soon after we went diving off the west coast of Mexico, in the Sea of Cortez, where my eyes were opened to the beauty and other-worldliness of the life down under. And the rest, as they say, is history. I currently have well over 2000 dives under the belt, and I have been fortunate to travel extensively in Asia, Australia, Fiji, Galapagos, Costa Rica, California, the Caribbean, Mexico and here in British Columbia. After shooting hefty DSLRs for many years, I just switched over to a groovy Olympus Micro Four Thirds camera, in a Nauticam housing, with dual Sea & Sea strobes and a bag full of lenses. In addition to this blog and my personal website (Awoosh.com/Directory), which is linked at the top of the blog, my stuff has been widely published in a variety of magazines and websites, including an ongoing regular monthly feature on Scubadiving.com. All links to this work can be found in this blog.
View all posts by Judy G Diver →
This entry was posted in All About Scuba Diving, Pic of the Day and tagged Jellyfish. Bookmark the permalink.