Pic of the Day – The Sexy Sea Apple 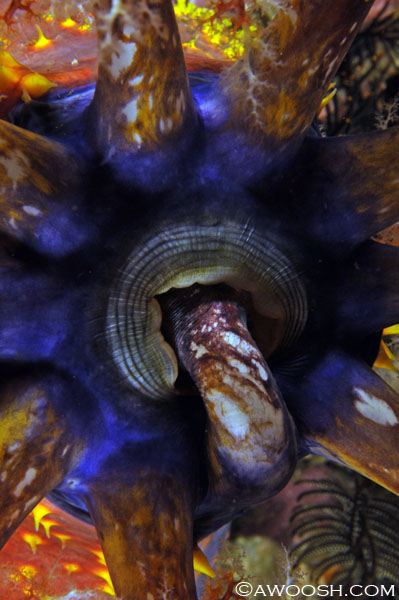 Today’s pic is an unusual subject – a Sea Apple, inspired by a crazy post that was circulating on Facebook this morning. To see some truly freaky stuff, follow this link. If you are already fearful of what lurks beneath, it might be prudent to give it a miss… ;^)

This Sea Apple image was captured at Cannibal Rock in the southern Komodo region of Indonesia. This is the only place where I have seen these strange creatures.

A member of the sea cucumber family, the Sea Apple (Pseudocolochirus tricolor) is not your typical, layin’ in the weeds kind of cuke. Instead, it attaches itself, upright, to the reef with some gnarly little feet, and then extends its “arms” to trap flyby plankton.

In addition to the wild coloration, it is the feeding action that is mesmerizing, and a bit creepy. Like a flower reaching for the sun, it keeps all its arms outstretched. Then, almost rhythmically, it inserts one arm at a time into its “mouth”, and scrapes off the plankton to ingest it. As it re-extends the scraped off arm, it inserts another.

A still image doesn’t really capture the uniqueness (nor the innate sexiness ;^) of this creature, but hopefully it gives you an idea of what it looks like. These things grow to be about 8 inches in height, more with the arms extended. Apparently, they are known to be night feeders, where their waving arms are less likely to attract predators, but I’ve seen them doing their thang in daytime in Komodo, in a plankton bloom…

A couple more images to illustrate the subject: 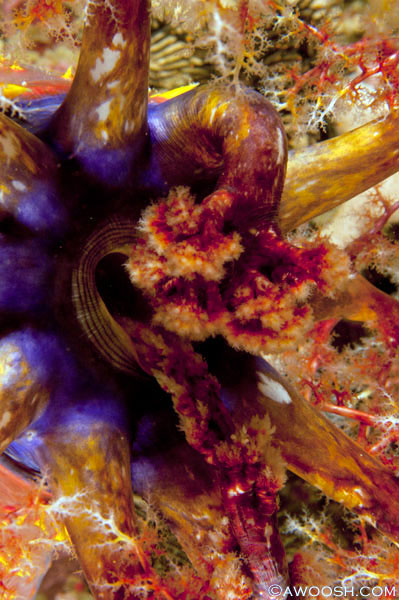 One arm coming out of the mouth (bottom of image), while another, fully loaded with plankton, goes in. 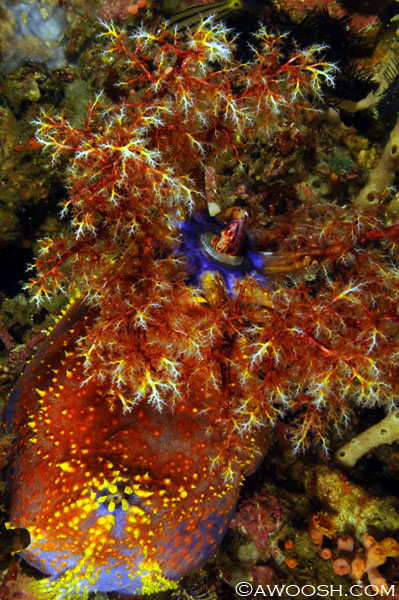 Born and raised on the west coast of Canada, I have always felt a strong connection to the sea. But for many years, I stayed on the surface, afraid of what lurked down deep. When I was in my early 30's, with three young children (aka the P's), my husband (aka Mr G) signed us up for a SCUBA certification course, as a surprise. Although I had my fears, my stubbornness prevailed, and somehow I made it through four murky, frigid, cold water dives in Vancouver to successfully pass the course. Soon after we went diving off the west coast of Mexico, in the Sea of Cortez, where my eyes were opened to the beauty and other-worldliness of the life down under. And the rest, as they say, is history. I currently have well over 2000 dives under the belt, and I have been fortunate to travel extensively in Asia, Australia, Fiji, Galapagos, Costa Rica, California, the Caribbean, Mexico and here in British Columbia. After shooting hefty DSLRs for many years, I just switched over to a groovy Olympus Micro Four Thirds camera, in a Nauticam housing, with dual Sea & Sea strobes and a bag full of lenses. In addition to this blog and my personal website (Awoosh.com/Directory), which is linked at the top of the blog, my stuff has been widely published in a variety of magazines and websites, including an ongoing regular monthly feature on Scubadiving.com. All links to this work can be found in this blog.
View all posts by Judy G Diver →
This entry was posted in All About Scuba Diving, Photography, Pic of the Day and tagged Pseudocolochirus tricolor, Sea Apple. Bookmark the permalink.