Pic of the Day – Vancouver Lighthouse 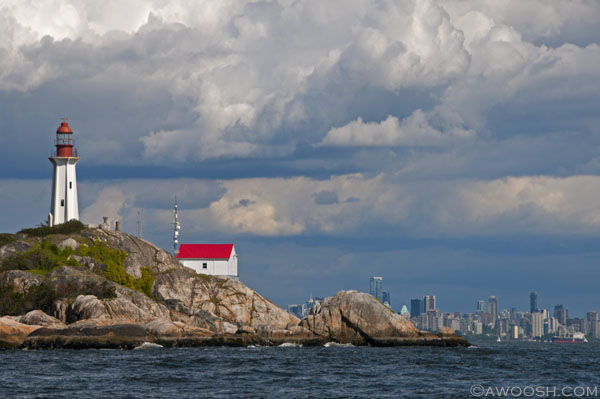 A break today from underwater pictures. Instead, I offer up a Vancouver city scene, taken on the weekend, from a marine perspective.

On Sunday afternoon, the heavy morning clouds started to mound to the east as they opened up in the west. Seeing the possibility for a nice afternoon scoot, we fired up the boat and headed out around the point from Fisherman’s Cove, towards the city.

Shooting images from a moving platform (in this case a small boat, in rough seas) is always a bit challenging, but I braced myself as best I could and took a couple of pix as we bounced by. I couldn’t resist the beautiful light and the dramatic cloud formations.

The lighthouse is at Point Atkinson, on the north shore of the city of Vancouver. It was originally constructed in 1875, and for any mariner in these waters it is an important navigational beacon. The lighthouse no longer has a keeper, as it was automated in the 1990’s.

Point Atkinson is located within a beautiful “natural” park – aptly called Lighthouse Park. The park has trails and paths winding through the forest (some of it old growth) and out to dramatic rock promontories, where people perch to enjoy the gorgeous views.

Born and raised on the west coast of Canada, I have always felt a strong connection to the sea. But for many years, I stayed on the surface, afraid of what lurked down deep. When I was in my early 30's, with three young children (aka the P's), my husband (aka Mr G) signed us up for a SCUBA certification course, as a surprise. Although I had my fears, my stubbornness prevailed, and somehow I made it through four murky, frigid, cold water dives in Vancouver to successfully pass the course. Soon after we went diving off the west coast of Mexico, in the Sea of Cortez, where my eyes were opened to the beauty and other-worldliness of the life down under. And the rest, as they say, is history. I currently have well over 2000 dives under the belt, and I have been fortunate to travel extensively in Asia, Australia, Fiji, Galapagos, Costa Rica, California, the Caribbean, Mexico and here in British Columbia. After shooting hefty DSLRs for many years, I just switched over to a groovy Olympus Micro Four Thirds camera, in a Nauticam housing, with dual Sea & Sea strobes and a bag full of lenses. In addition to this blog and my personal website (Awoosh.com/Directory), which is linked at the top of the blog, my stuff has been widely published in a variety of magazines and websites, including an ongoing regular monthly feature on Scubadiving.com. All links to this work can be found in this blog.
View all posts by Judy G Diver →
This entry was posted in British Columbia Travel, Pic of the Day and tagged Lighthouse, Lighthouse Park, Point Atkinson. Bookmark the permalink.