In honour of World Turtle Day – May 23rd – I am featuring turtle(s) for Pic of the Day. 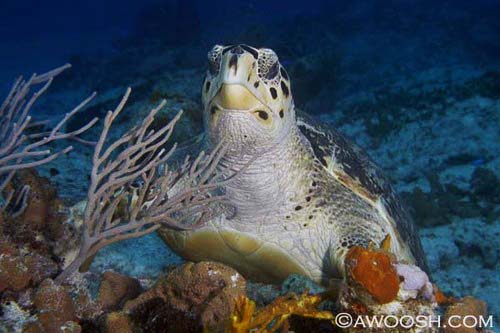 Turtles are very cool creatures – air breathers, and egg layers (on land – much to the peril of the turtles, their eggs, and the hatchlings). They appear to be sometimes curious, and will often let divers approach quite closely, especially when they are feeding.

Turtles like to eat sponges and jellyfish, and I’ve seen them drifting in the blue as they munch a big jelly (they seem unconcerned with the stinging tendrils), and I’ve also seen them hunkered down on the reef, chowing on a tasty sponge.

This Cozumel turtle was in eating mode. Despite the hefty current on this dive, he just stuck his fins into the reef and poised himself over a sponge. I had to swim hard, up current, to get this portrait.

Unfortunately for turtles, they are apparently good eating themselves, and in many locations I’ve been diving, they are worryingly scarce. Add to that the massive amount of shoreline development that has disturbed their nesting grounds, and you get yet another animal that is threatened with extinction. 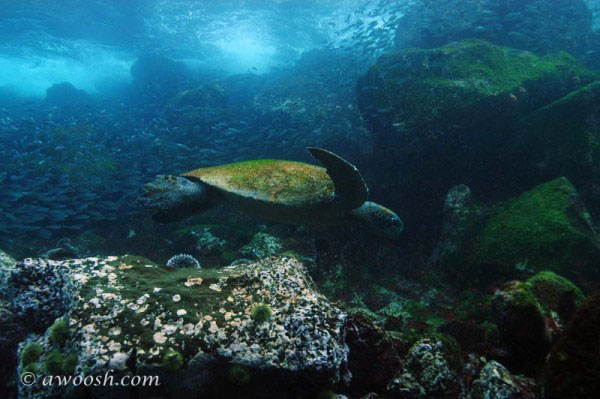 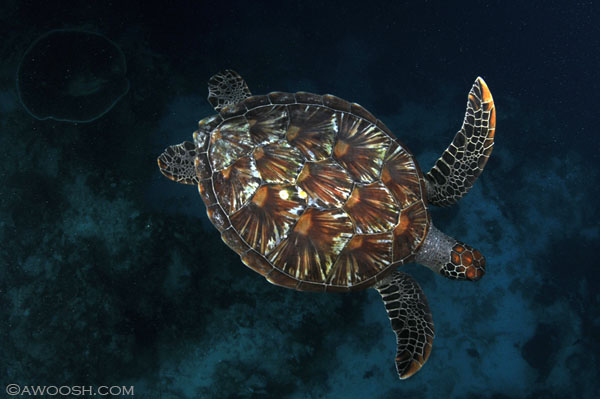 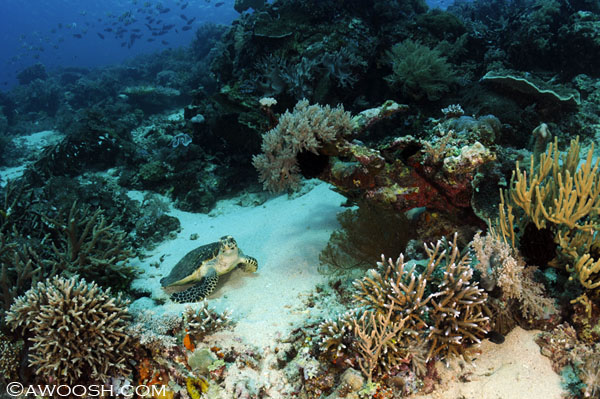 Komodo, Indonesia Turtle – in its garden 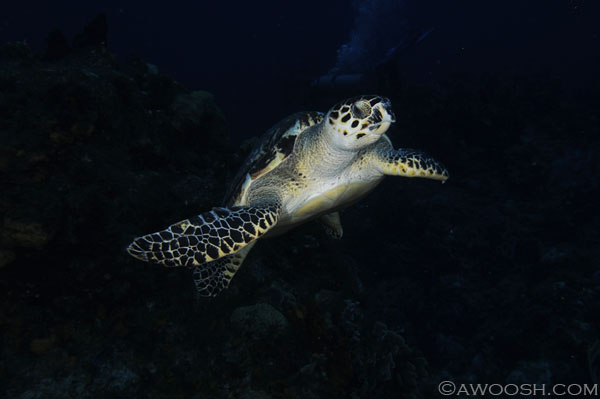 One more from Cozumel, where turtles are quite plentiful, thanks to the Marine Sanctuary.

Born and raised on the west coast of Canada, I have always felt a strong connection to the sea. But for many years, I stayed on the surface, afraid of what lurked down deep. When I was in my early 30's, with three young children (aka the P's), my husband (aka Mr G) signed us up for a SCUBA certification course, as a surprise. Although I had my fears, my stubbornness prevailed, and somehow I made it through four murky, frigid, cold water dives in Vancouver to successfully pass the course. Soon after we went diving off the west coast of Mexico, in the Sea of Cortez, where my eyes were opened to the beauty and other-worldliness of the life down under. And the rest, as they say, is history. I currently have well over 2000 dives under the belt, and I have been fortunate to travel extensively in Asia, Australia, Fiji, Galapagos, Costa Rica, California, the Caribbean, Mexico and here in British Columbia. After shooting hefty DSLRs for many years, I just switched over to a groovy Olympus Micro Four Thirds camera, in a Nauticam housing, with dual Sea & Sea strobes and a bag full of lenses. In addition to this blog and my personal website (Awoosh.com/Directory), which is linked at the top of the blog, my stuff has been widely published in a variety of magazines and websites, including an ongoing regular monthly feature on Scubadiving.com. All links to this work can be found in this blog.
View all posts by Judy G Diver →
This entry was posted in All About Scuba Diving, Photography, Pic of the Day and tagged Turtle, World Turtle Day. Bookmark the permalink.