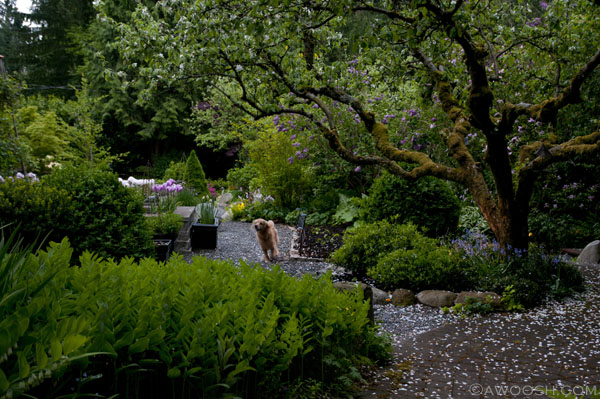 Happy Harry scoots around the garden.

Today’s post is a gallery of Spring garden images. In addition to a love of the sea and all its creatures, I also love gardens. When I travel, I often plan excursions to walk, and sometimes photograph, “famous” gardens and city parks.

Over the years, I have been inspired to create, transform, and maintain an oasis of our own. It is not intended to be “famous” or “grand”, but I think it has evolved over the years into something pretty, and more importantly, something manageable. It has also been an exercise in blending something old – many of the original trees, large shrubs etc, with something new – many more trees and shrubs, to give privacy, year round structure and colour interest to the garden.

The garden is a happy place for me – planning, weeding, planting and tending. I find it to be very meditative, and there is something therapeutic and natural about digging in the earth, planting, watching things grow. And it is good exercise.

I learned a lot about gardening from my parents, who are avid gardeners themselves. I guess the apple doesn’t fall far from the tree ;^) This old house is the one I grew up in – built in 1939, my parents bought it in 1965, and we bought it from them in 1992, when they decided it was time to downsize their home, and more importantly, their garden. Over their tenure, the garden evolved significantly – it was always lovely, but very high maintenance. The house sits on about a half acre of property, which makes for a large plot of land on which to grow and tend a garden.

When we did a significant re-landscape a few years ago, we removed a lot of water- guzzling, high maintenance turf and several decadent old fruit trees. In their place we added more garden beds, and several gravel paths that allow easy access to them. We planted some new trees and shrubs, relocated others, and we had a large supply of already existing perennials (Solomon’s Seal, phlox, many kinds of hostas, irises, geranium, Japanese Anemone, amongst others) that we split and replanted. We also added three large raised masonry boxes – for growing vegetables. The raised boxes tend to accelerate growth as the soil heats up more quickly, and make it much easier for weeding, planting and harvesting. We aren’t getting any younger ya know ;^)

Eating from the garden is one of the big rewards of having one. We grow a lot of rhubarb in the garden beds, as I am a big fan of the foliage and the fruit. We also recently planted a modest “allee” with four varying fruit trees – a good way to dig up a bit of the remaining lawn and replace it with pretty Spring flowering trees that will bear summer fruit and create some shade on hot summer days.

We added the ponds and waterfalls about four years ago – as a way of creating some white noise to mask the sounds of traffic from a highway overpass a few blocks from our house. The ponds occupy a fair amount of space, that would otherwise have to be planted and weeded. They are relatively low maintenance – we vacuum them out a couple of times a year, and do some minor work with the plants in the Spring and the Fall. In the Spring, that means feeding the (potted) water lilies, and in the Fall, cutting back all the vegetation for the winter. An old neoprene drysuit, cut off at the chest, makes for some skookum hip waders.

We keep some goldfish in the bottom, deeper pond – but they are regularly predated by huge Blue Heron cranes that swoop in to go fishing. The fish have a “house” to hide in (black plastic crates, turned on their sides, with basalt ledge stone stacked on top), but anyone who has ever watched a heron fish will understand their incredible patience – they will happily wait out the most elusive prey. When we catch them wet-footed, we startle them, and then they lift off with their massive wings, squawking their prehistoric caws as they reluctantly depart.

It is hard to really get the sense of the garden from photographs – and impossible to illustrate the smells, and the sounds – the sploosh of water cascading down basalt ledges in waterfalls, the trills and tweets of birds calling.

Anyhoo, enough with the words. Here are a few pictures from the garden this Spring: 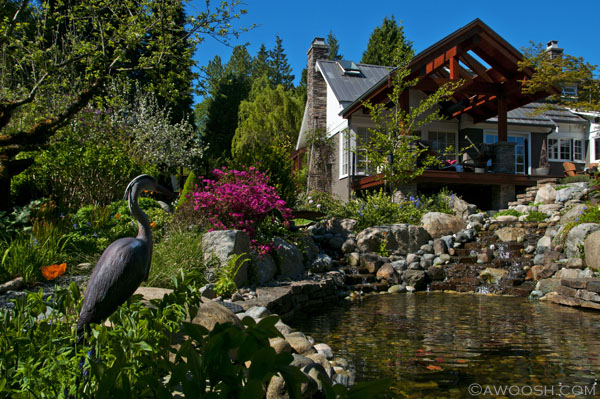 The Blue Heron statue is supposed to discourage other Herons from coming to fish. So far, not so effective… ;^) 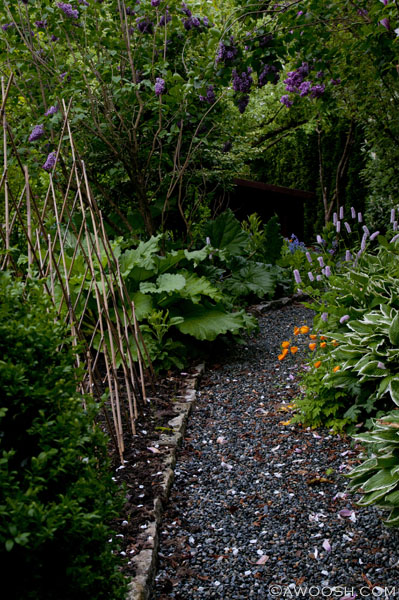 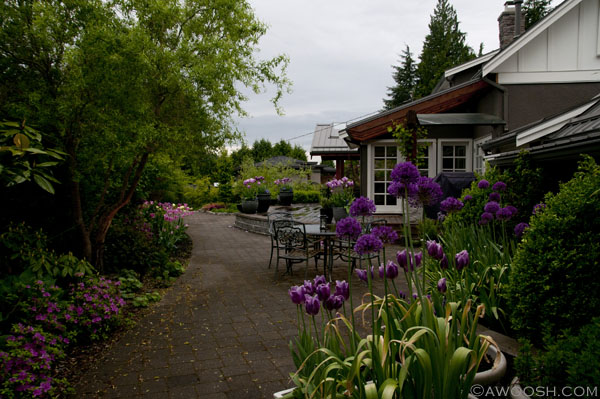 Right after we finished our big garden renovation, our old concrete/plaster pool gave up the ghost. Hard to believe a pool fit here, between the house and the fence on the left. We had the pool bottom broken up for drainage, filled with recycled road base, and then had garden beds and pavers installed over top. 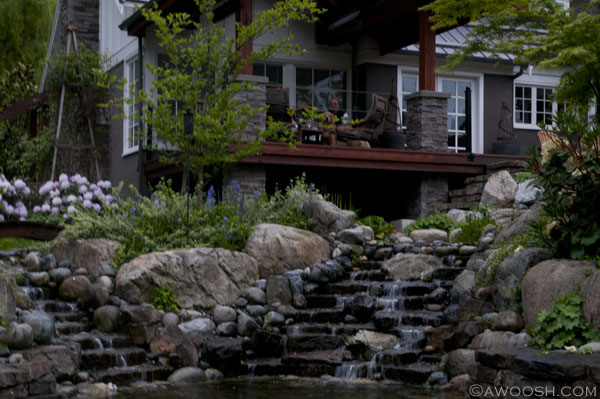 Mr G and Harry enjoying the garden from the covered deck. We spend a lot of time in that space. Very peaceful with the sound of water. 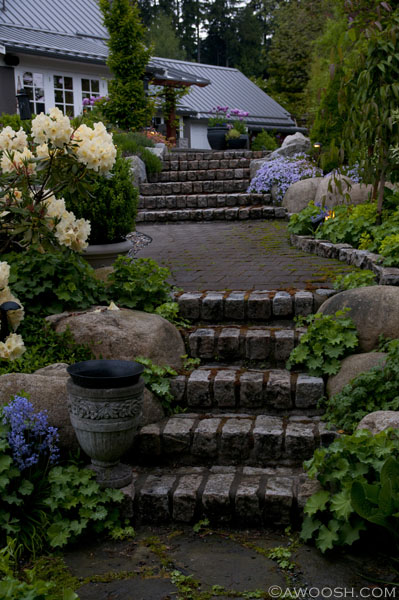 Cobbles from an old garden wall on the property were reused to build these stairs, as well as borders for many of the garden beds. The story is that the granite cobbles originally came from England, as ballast in ships that were picking up West Coast timbers to take back to Britain. Many of the original Vancouver streets were paved with these cobbles as they were dumped ashore before loading the wood. When the city decided to upgrade these roads, the cobbles were dug up and were there for the taking. The previous owners (builder?) of the house, clearly got his/her hands on a good stash. 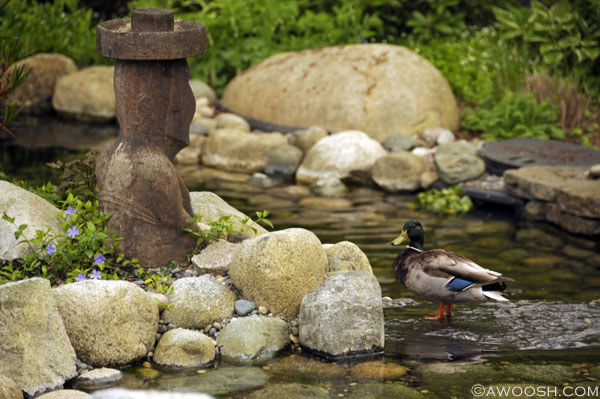 A mallard visits the ponds. Once or twice a year, a mated pair will stop off for a visit on their migration. 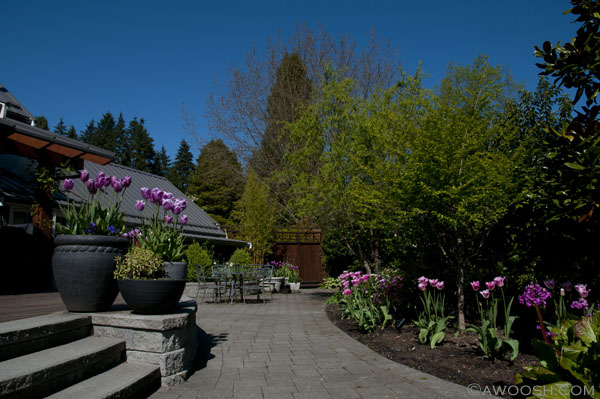 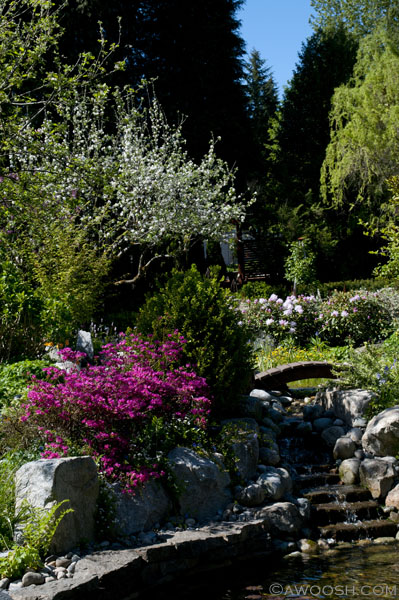 Mr G and I designed and built that little cedar bridge. Pink azalea in the foreground, light pink rhododendrons in the background, and an old apple tree flowering behind all that.

4 Responses to In a Garden