I am home again, after a visit to Berlin last week. There is glorious early summer weather here in Vancouver, and in my absence the garden exploded into riotous colour – everything blooming in one huge exhale after a long, stiflingly wet winter.

And I’ve come home to a missing kitty. Our beloved Mr Simon is awol. He is a tough little character, having grown up homeless on the banks of the Fraser River, up near Lytton (a very rural and rugged area). He found our middle daughter, and attached himself to her. She kept him for a while at the resort where she works, but he was too friendly – visiting the kitchen, guest accommodations etc. So she called me up and asked me if we could give him a home. I went up to meet him, experienced love at first sight, and brought him back to Vancouver with me.

He has been living the life of riley with us for almost three years – and he has won our hearts. Even people who don’t like cats like Simon – really, he behaves more like a dog than a cat. Fearless, friendly, curious, good company, and BFF of our dog Harry.

So the despair of his missing is large. I’ve circulated a short note around to the neighbours (many of whom know him from his regular visits), asking them if they’ve seen him, and requesting that they check their sheds, basements etc to make sure he did not get locked in over the weekend (he went missing on the day I came home). I’ve put up posters in a wider area, hoping that someone recognizes him and knows where he is.

But really, I know in my heart that the odds are that our furry boy has been taken by coyotes. There are several known dens in our neck of the woods, and our municipality seems unwilling or unable to deal with these voracious predators. Missing cat and small dog posters are regular sad features on the light standards in our neighbourhood. In fact, a previous cat (the adorable Siamese cross nutbar Phoebe) also disappeared at about the same age (3). We’ve always been careful to get our cats back in to the house before dark, but both of our cats disappeared during daytime.

If you know cats, you know what independent creatures they are. No matter how domesticated, they have a wild streak that makes them want to spend time outdoors. We did try to encourage Simon Fraser to be a house cat – but not so much. He would literally climb the walls if he was not let outside for at least a portion of the day. So we put a collar on him with a tag with our phone number, and a couple of bird bells to give the robins a heads up that he was on the prowl, and we let him go.

I still have a faint sliver of hope that I will come home from an outing and that fuzzy orange fur ball will be waiting for me by the garage as he often did – perched up high on the fence, watching the world from above. Or that I will come down the stairs in the morning, and he will be sitting patiently at the glass door, willing me with intense green eyes to let him in. That he will strut into the house and nose kiss Harry, then jump up to have a quick snack before curling up in Harry’s dog bed or a wicker basket for a leisurely nap. That I will be weeding the garden and he’ll jump out from under one of the shrubs and give me a hello meow. That he will follow Harry and me down to the park at the end of the street and comically stalk Harry while he chases a bright orange ball.

And I know, he is just a cat. The news this week has been full of the three kidnapped young women, escaping after being held captive for a decade by some monster of a man in Cleveland. We are reminded, yet again, that there are human predators out there who would steal the innocence, the very lives of their victims, treat them like caged animals, make them submit to their depravity, and subject the people who love them to such terrible despair – years and years of not knowing if their missing loved ones are alive or have met some horrible ending.

In comparison to the horrifying long ordeal for these girls, and their families, a missing cat is small stuff indeed. But still, my heart is heavy today. 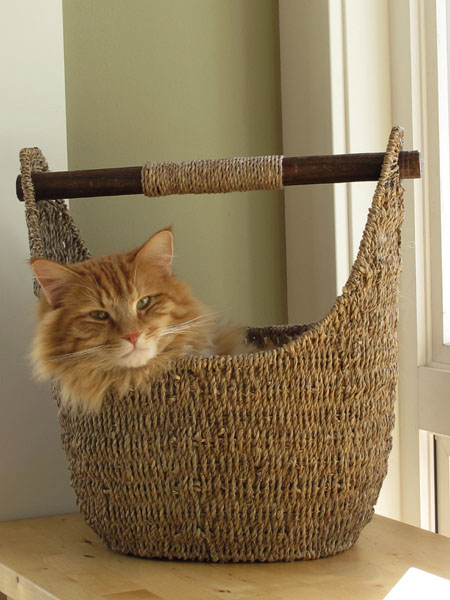 Update (May 14) – Sadly, it looks like Simon was hit by a car and killed on May 4 – the day he went missing. I put up posters and circulated flyers in our neighbourhood. It took several days to get a response, but over a period of a couple of days I heard from four kind people who took the time to make a difficult call to let me know that they had seen a large, fluffy, orange cat, dead by the side of the road on Saturday morning, about a block from our house. One of the callers said she contacted the local SPCA to request that they come and pick up his body. When they arrived 45 minutes or so later, they couldn’t locate him. When I went to the spot where he was last seen, there was no remnant of him, but there was an eagle feather. Eagles do nest nearby, and I have taken to imagining that an eagle swooped down to lift his lifeless body from the side of the road, and soared away with it.

Born and raised on the west coast of Canada, I have always felt a strong connection to the sea. But for many years, I stayed on the surface, afraid of what lurked down deep. When I was in my early 30's, with three young children (aka the P's), my husband (aka Mr G) signed us up for a SCUBA certification course, as a surprise. Although I had my fears, my stubbornness prevailed, and somehow I made it through four murky, frigid, cold water dives in Vancouver to successfully pass the course. Soon after we went diving off the west coast of Mexico, in the Sea of Cortez, where my eyes were opened to the beauty and other-worldliness of the life down under. And the rest, as they say, is history. I currently have well over 2000 dives under the belt, and I have been fortunate to travel extensively in Asia, Australia, Fiji, Galapagos, Costa Rica, California, the Caribbean, Mexico and here in British Columbia. After shooting hefty DSLRs for many years, I just switched over to a groovy Olympus Micro Four Thirds camera, in a Nauticam housing, with dual Sea & Sea strobes and a bag full of lenses. In addition to this blog and my personal website (Awoosh.com/Directory), which is linked at the top of the blog, my stuff has been widely published in a variety of magazines and websites, including an ongoing regular monthly feature on Scubadiving.com. All links to this work can be found in this blog.
View all posts by Judy G Diver →
This entry was posted in Writings. Bookmark the permalink.