Pic of the Day – Psychedelic Frogfish 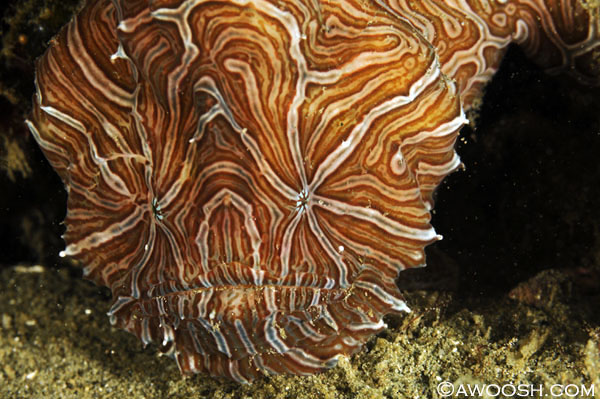 A funny fish face for Friday. I wonder if the first person to spot this bizarre looking frogfish thought someone had spiked their pre-dive beverage with a little tot of Lysergic Acid. I mean, really? What forces of nature would have a fish evolve with this kind of crazy patterning and coloration?

But Mother Nature, she’s got a sense of humour all right – so many marine critters have crazy appearances – just check out the thousands of kinds of nudibranchs and fish with their polka dots and Picasso patterns.

This is a special frogfish – only recently discovered (2008) – in Ambon Harbour, in eastern Indonesia. My id book suggests that it has also been documented in Bali. It is special in that, unlike most frogfishes, it lacks the “lure” that these fish can deploy from their facial plane, to attract little fish. Then, bam, with a huge yawning mouth, they snap up the taker and dinner is served. This fish has no lure, a smaller mouth, and also, uniquely, has a “flat” face, that gives it binocular vision, like humans. Other kinds of frogfish have eyes on the sides of their more elongated heads. This particular kind of frogfish grows to about six inches in length. And they are called frogfish because they “hop” along the reef as opposed to swimming clear of it.

The Psychedelic Frogfish instantly soared to fame as a “must see Indonesian dive mecca”, and people came from far and wide, in the hopes of spotting this rare and unusual fish, and many, like me, also hoped to photograph it.

And I did see this fish on two different trips to Ambon. On the first, the fish was head into the reef, making it very difficult to get a decent shot – I have evidence, but it ain’t pretty.

I have to reveal that at that time, different dive ops were playing a game of “hide the frogfish” – the dive guys were gathering up bits of broken coral to create a little bunker for the fish, and so they could pretty much guarantee finding it again on the next dive. In addition to far too much reef touching, this was a bad practice because it would mean that the fish could not feed itself from flyby food. When I realized what was happening, I let the dive guys know I didn’t think it was cool.

On the second sighting, on the second trip, the fish was out on the reef – no excavation was undertaken to reveal it. And, at least for a few moments, it was in a position where I could take this portrait. The back end of the fish was tucked into the reef, so I wasn’t able to get a full body depiction.

By my third visit to Ambon, this fish was awol – it hadn’t been seen in at least a year, despite very thorough searching.

There is a theory that these fish, like the similarly much sought after Rhinopias, migrate from deep to shallow and back to deep with changing seasons, but I have to wonder if someone didn’t bag the froggie, and stick it in an aquarium somewhere. Hopefully, this rare fish will have enough descendants in the wild to propagate the species.

Born and raised on the west coast of Canada, I have always felt a strong connection to the sea. But for many years, I stayed on the surface, afraid of what lurked down deep. When I was in my early 30's, with three young children (aka the P's), my husband (aka Mr G) signed us up for a SCUBA certification course, as a surprise. Although I had my fears, my stubbornness prevailed, and somehow I made it through four murky, frigid, cold water dives in Vancouver to successfully pass the course. Soon after we went diving off the west coast of Mexico, in the Sea of Cortez, where my eyes were opened to the beauty and other-worldliness of the life down under. And the rest, as they say, is history. I currently have well over 2000 dives under the belt, and I have been fortunate to travel extensively in Asia, Australia, Fiji, Galapagos, Costa Rica, California, the Caribbean, Mexico and here in British Columbia. After shooting hefty DSLRs for many years, I just switched over to a groovy Olympus Micro Four Thirds camera, in a Nauticam housing, with dual Sea & Sea strobes and a bag full of lenses. In addition to this blog and my personal website (Awoosh.com/Directory), which is linked at the top of the blog, my stuff has been widely published in a variety of magazines and websites, including an ongoing regular monthly feature on Scubadiving.com. All links to this work can be found in this blog.
View all posts by Judy G Diver →
This entry was posted in Photography, Pic of the Day and tagged Histiophryne psychedelica, Psychedelic Frogfish. Bookmark the permalink.

2 Responses to Pic of the Day – Psychedelic Frogfish