Pic of the Day – Excuses

So, if anyone is actually reading this thing, you may have noticed it has been a couple of weeks since I last blogged ;^)

I have my excuses – we are in the middle of a kitchen redo (renovation sounds so much scarier ;^).  Last week we escaped the mess and turmoil for a week, and took our kids sailing in the Gulf Islands of British Columbia. I plan to blog that adventure soon.

We have been living in this old house (currently 73 years old) for just over 20 years.  Before that, it was my childhood home.  My parents bought it in ’65, and brought up their large family of five girls, somehow shoehorning us all in to a rambling cottagey house with not enough bedrooms and a very big garden.

It has been 20 years of off and on improvements and renovations since we bought the house from my parents in ’92.  The kitchen was totally gutted, redesigned and installed 12 years ago – 1999/2000 – in what I affectionately call the “Millenoreno” ;^)  At the time, it was part of a very large renovation – well over half the house was ripped down to the studs, rewired, replumbed, walls opened, walls removed, stairs rerouted, some new windows and doors, insulation added, a ton of slate floors installed (which have held up beautifully, with fairly low maintenance – they are lifers for sure).  Our family of five lived in the house during the renovation (in winter – no heat!) and camped in two bedrooms and one bathroom on the top floor, which was the only part of the house not seriously under construction or being used for furniture/kitchen/everything storage.  Designing and contracting the job myself (and doing all the painting) saved us quite a bit of money, but was a full time job for the duration.  For the two renovations since then (the big exterior facelift we did two years ago, which was complicated and expensive, and this kitchen reno), I got wise and hired a good contractor.  I still do the design, but I have hung up my paint rollers and brushes and no longer have to try to source and co-ordinate good trades.

Being part of such an ambitious (not to mention expensive) undertaking as the Millenoreno, we had to make some compromises on the previous kitchen – IKEA cabinets were chosen and installed, as well as melamine countertops, as there was no budget for stone.  I knew some time down the road we would likely have to replace the cabinets and counters – IKEA makes nifty, inexpensive stuff, but (in our experience) it typically does not have a long lifespan.  As a keen cook, I also coveted a 48″ stainless steel range, but we couldn’t afford it, so we got a 30 inch one (a screaming hot deal), and I designed the kitchen so the big one could be installed in the future ;^)

Fast forward through 12 years of heavy use/abuse. Despite looking okay from a distance, the kitchen had run to the end of its life cycle.

I love design (who knew? it was a later-in-life discovery), and designed the first kitchen, with some assistance from an IKEA kitchen specialist.  I made a few mistakes, and the ones I made were quite minor (a few electrical outlets not in the ideal locations, using inexpensive beadboard for a backsplash instead of bucking up for tile, installing a bar sink that was rarely used were the main crimes). The function of the kitchen worked very well for us, whether there was one cook, or five (which happened when all the kids were pitching in). It was one of those kitchens where everyone congregated during a party – with open eating areas on either end of the kitchen, plus a big peninsula with stools for perching, it was great for entertaining our large family and/or friends gatherings, but cozy enough that Mr G and I did not feel like two peas in a big glass jar after the kids grew up and were out in the world.

So I did not re-invent the wheel this time around.  The layout will stay the same (which allows us to keep the Nuheated slate floors, with a few minor patches), but the new cabinets are solid wood, made by a local craftsman who does skookum custom work at a reasonable price.  We are adding more natural (stained) wood to this new kitchen, in keeping with the electic, west coast feel of our home, but are keeping the function area of the kitchen mostly white to keep the room light and airy.

We are fortunate to have a small covered barbecue deck off the kitchen, and it is there that we set up a temporary camp kitchen that functions surprisingly well.  We ran power out to it so we can run a kettle or toaster, the bbq has a gas side burner that is great for boiling pasta and corn, or cooking eggs.

And so it goes.  Washing dishes in a rubbermaid bucket is inconvenient, but effective.  The kitchen has been out for almost a month, and we still have a few weeks to go.

A few pictures might help tell the story.  I will likely blog the kitchen again when it is done, for anyone interested in seeing the final product.  One of these days I might even attempt to dig up and sort all the pictures from renovations over the years to tell the story of this old house.  I was pretty diligent about documenting the work we’ve done, but a lot of the renos were shot with film, as they were done in pre-digital camera days.

Before (the IKEA kitchen from the Millenoreno): 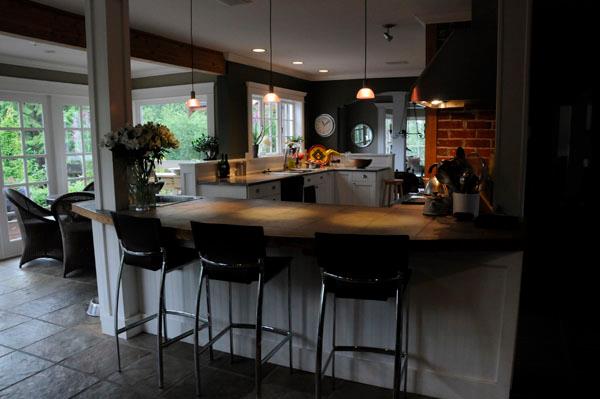 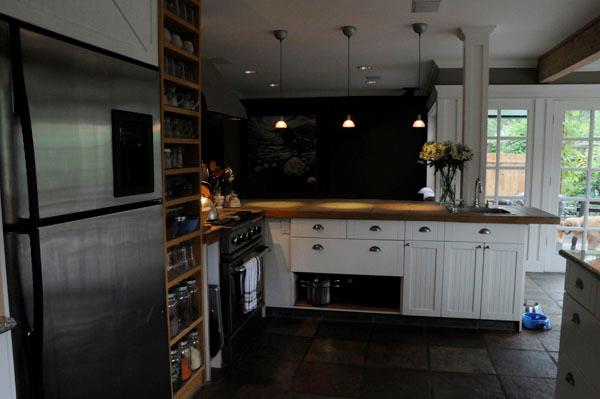 Old Kitchen View 3 – the broken IKEA pot drawer was the catalyst for the kitchen redo. 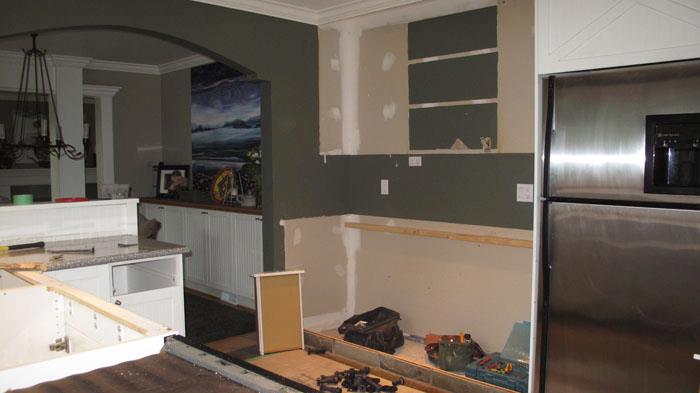 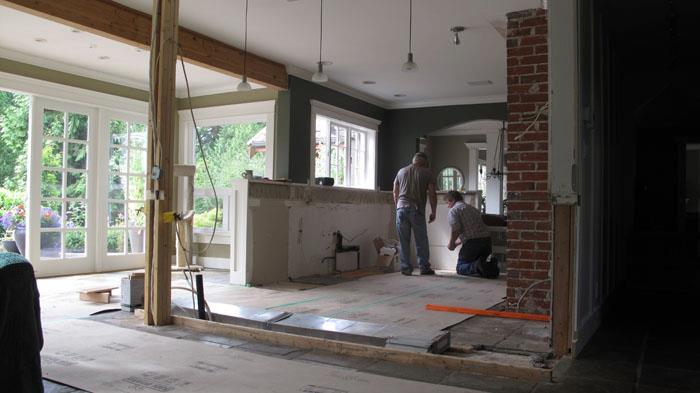 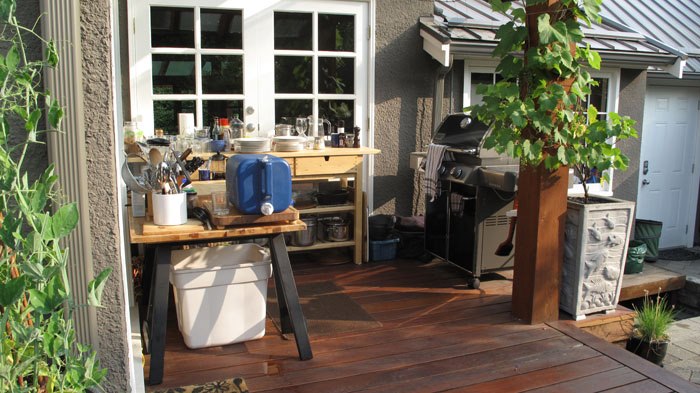 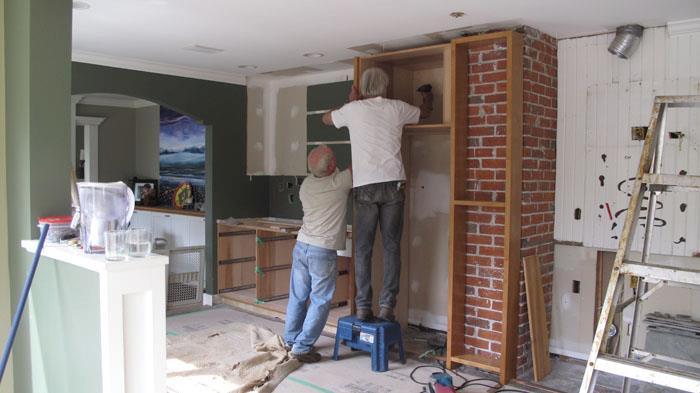 Start of the new cabinet install. 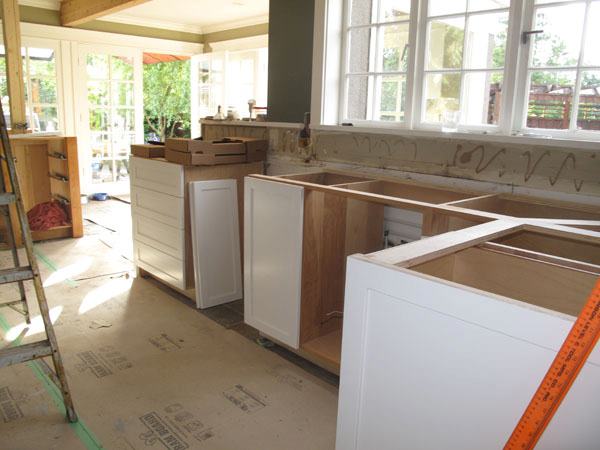 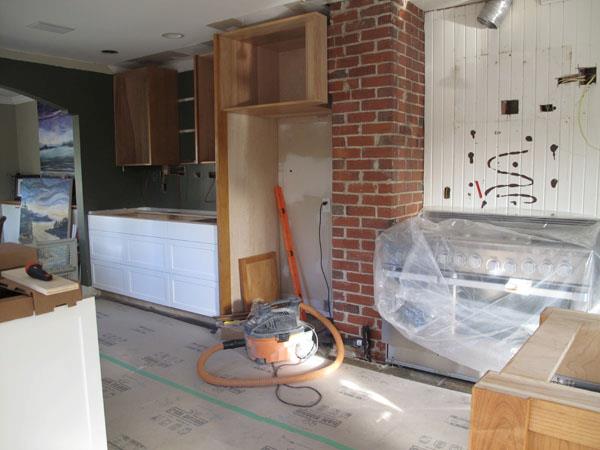 New gas stove in. That sucka weighs 500 pounds, and there were a few stairs involved. Great job by the guys to get it in, and perfectly level on a bumpy slate floor.

3 Responses to Pic of the Day – Excuses