Pic of the Day – Manta Rays

My last post was all about one of the tiniest subjects I have attempted to photograph. The only thing smaller is a Hairy Shrimp – spotted (and photographed) on my last trip to Indonesia.  I’ll share that image another time, because today it is all about the other end of the photographic spectrum – a very big critter: 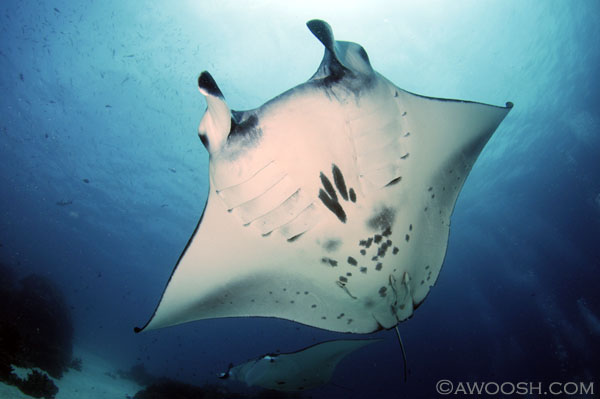 There are few animals in the ocean as graceful, and as awe-inspiring, as these humungous mantas. When one of these beauties does a flyby overhead, they are so big, they eclipse the sun. This manta was at least 15 feet wide, wingtip to wingtip.

This image was captured at Manta Sandy – a site in Raja Ampat (eastern Indonesia), not too far from Sorong (aka So Wrong – truly an armpit of a place).  Manta Sandy is well known for its regular manta visits, and most Raja Ampat live aboard itineraries will include this dive.

It would appear that the few small coral bommies that litter the site are manta cleaning stations. For the uninitiated, “cleaning stations” are spots on the reef where critters (mostly fish) come in to be “cleaned”.  The cleaning is done mostly by little wrasses, or by butterflyfish, or by little shrimp, all of whom remove (and consume) small parasites from their customers, including from inside their mouths and their gills.  Amazingly, the fish being cleaned know not to consume the little cleaner fish and shrimp, so they live to groom another day.  I can be entertained for long intervals by parking myself somewhere near a cleaning station and watching the fish line up for their spa sessions.

I’ve only seen a manta cleaning station once before in my travels – near Heron Island, Australia, where we were also treated to a spectacular show – in less than stellar visibility.

Mantas, like Whale Sharks, are plankton feeders, and are therefore harmless to humans. So the biggest fish (Whale Shark) and the biggest ray (Manta) in the oceans feed on the smallest of organisms.  Funny, eh?  Both open their large mouths wide, like huge buckets, and scoop up water filled with plankton.  It then passes through filters that separate out the plankton for their consumption.

Unfortunately, humans are not so harmless to mantas – they are being fished heavily in several parts of the world, for their fins.  The planet’s shark populations are being so drastically and quickly decimated by overfishing for the lucrative Asian shark fin soup market that fishermen are turning to other ocean inhabitants that have fin-like structures for supply.  Tragic…

Perched on the bottom at about 60 fsw, waiting in the weeds as it were, all us divers were tucked in behind a berm of coral and rock.  We had been told to stay back from the bommies, or the mantas would not come in to be cleaned.

For a while there was no sign of the mantas (always a possibility – another boat was skunked a day or two after we wuz there), and we entertained ourselves by taking silly pictures of each other and looking for blennies, gobies, and other little critters on the berm and in the sand flats.  So it was a huge (pun intended) thrill to see a squadron of manta rays arrive from out of the blue gloom.  At one point there were a half dozen or so, circling overhead, swooping and banking and hovering like some alien spacecraft.

To get the picture I bagged above (and others), I watched the action for a while and figured out the flight pattern.  The mantas, after circling over the bommies and being cleaned, would fly up a sand channel, then circle around and come in again for a second, or third, or… pass.  So I positioned myself quite far up that channel, which did not interfere with the cleaning stations at all, and waited for the right photo opportunities to transpire. 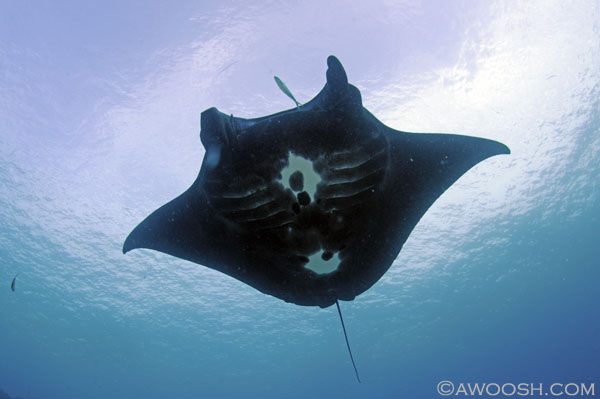 Coming soon – the next installment of “My Favourite Places To Dive”.

Born and raised on the west coast of Canada, I have always felt a strong connection to the sea. But for many years, I stayed on the surface, afraid of what lurked down deep. When I was in my early 30's, with three young children (aka the P's), my husband (aka Mr G) signed us up for a SCUBA certification course, as a surprise. Although I had my fears, my stubbornness prevailed, and somehow I made it through four murky, frigid, cold water dives in Vancouver to successfully pass the course. Soon after we went diving off the west coast of Mexico, in the Sea of Cortez, where my eyes were opened to the beauty and other-worldliness of the life down under. And the rest, as they say, is history. I currently have well over 2000 dives under the belt, and I have been fortunate to travel extensively in Asia, Australia, Fiji, Galapagos, Costa Rica, California, the Caribbean, Mexico and here in British Columbia. After shooting hefty DSLRs for many years, I just switched over to a groovy Olympus Micro Four Thirds camera, in a Nauticam housing, with dual Sea & Sea strobes and a bag full of lenses. In addition to this blog and my personal website (Awoosh.com/Directory), which is linked at the top of the blog, my stuff has been widely published in a variety of magazines and websites, including an ongoing regular monthly feature on Scubadiving.com. All links to this work can be found in this blog.
View all posts by Judy G Diver →
This entry was posted in All About Scuba Diving, Photography, Pic of the Day and tagged indonesia, manta ray, manta sandy. Bookmark the permalink.