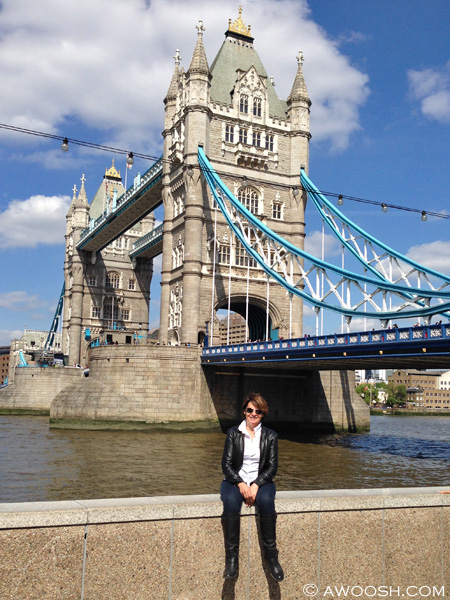 It’s been a while since I cooked up a juicy blog post, but with a small gallery of iPhone images sitting in the hopper on my desktop, a complete dearth of diving over the past many months, and a rainy day outside, I thought I would share a day in the life of a London tourist.

I traveled to Berlin at the beginning of May to hang out with Mr. G while he conducted some business there. I have shared before that I am fortunate to get to do this a couple of times a year, thanks to the big bag of frequent flyer points that Mr. G accumulates in his work life. He travels quite a bit for business – and this past year he outdid himself. All that travel is pretty tough on his bod, but the big benefit is the ability to bag Business Class seats on points for long haul flights (and it’s a double gain – flight bonuses plus points gained by paying with our points awarding credit card). Unfortunately, although the points are redeemable on the Star Alliance network (which includes Lufthansa – the most direct way to get to Berlin from Vancouver via Frankfurt, and Mr. G’s usual routing), only Air Canada recognizes his über-elite status (well over 100k miles traveled per year!). On the partners, we have to book pretty close to a year away to get the seats – almost impossible to define the dates that far out. But Air Canada, bless their customer retentive little hearts, will usually give him/me a seat on his points at short notice.

Anyhoo, I shall continue to digress. It’s a bummer that Air Canada doesn’t operate flights to Germany – the closest hub that works for us is London Heathrow. I’ve been less than complimentary about this airport in the past, but I have to confess that these days, with the new terminals up and running, and despite the rats’ nests of tunnels and mad mouse bus connections between these terminals, it all works pretty fine. In the past, I was able to fly from London to Berlin on British Midlands, also Star Alliance, so doable as part of the international ticket points redemption. But Lufthansa dumped B.M. (ar ar – ;^) due to continual losses on the balance sheet, and then started up a little subsidiary airline (German Wings) – with which they have sneakily avoided joining the Star Alliance. So now I have to fly to London to get to Europe in anything less than a year’s notice, and then pay to get from London to Berlin. And on the way out, you can’t get out of Berlin early enough to make the connection to the Vancouver flight in London. Basturds. London has the current distinction of having (by far) the most exorbitant Air Passenger Duty in Europe. The taxes and fees that Aeroplan tacks on to my so-called ‘free’ Business Class ticket are pretty much what I would pay to fly full fare in Economy. Grrrrrrr.

But despite the crazy taxes, a layover in London is not such a terrible thing. And as we set out to prove, you can see a whole lotta London in six hours if you’ve got good walking shoes, a map, and reasonable stamina. The fact that there are lots of places to stop along the way for a cleansing ale doesn’t hurt either ;^) Being fairly frequent frequent points travelers, we’ve learned to get creative with these extra layovers (they often happen when we travel to Asia as well, and we’ve enjoyed spending layover days in Hong Kong, Beijing and Singapore). I’ve been to London several times – starting way back in 1978. It took a week I was lucky enough to spend there in 2007 to really get a feel for the city – it is huge, and not on a grid, which can make navigation tricky (and I can still get easily lost in Soho). The colour-coded Underground is super easy (and a pretty inexpensive way to get to Heathrow from downtown), but zipping around that way means you never really get a sense of the layout of this wonderful city.

So Mr. G and I popped over from Berlin on a early Saturday morning German Wings flight, and checked ourselves and our bags into a very nice airport hotel – the Sofitel in Terminal 5 – which is an easy (and free) commute by train from all other terminals, via the Heathrow Express. The Heathrow Express also speeds downtown non-stop to Paddington Station – £34 round trip (about US$57), and it takes a mere 15 minutes to do it. You can also get downtown via the Piccadilly Line (part of the London Underground system), which runs out of Terminals 1 through 5. Cost is £5.70 (about US$9.50), and the train stops at all stations, so to get downtown it takes close to an hour. Great people watching, and for quite a lot of the distance through the outskirts of London it is at ground level, so there’s lots of scenery to take in. On this trip, we chose the Piccadilly Line over the Heathrow Express, both to save moolah, and also because we wanted to start what was to be a fairly epic walk at Covent Garden, which is a stop on the Piccadilly Line. We bought an all day pass for the Underground, which would give us the flexibility to move about in the city if our tootsies got tired.

It was a truly fine warm spring Saturday morning when we climbed out of Covent Garden station and into the sunshine. All of London seemed to be out enjoying the day, and this already huge population was swollen by herds of tourists – it was May Day in some countries in Europe, and so a long weekend for many. I had never seen London this congested before – scads of people on the sidewalks and in the parks and on the bridges and waiting for somewhere to sidle up to a bar for a cold one. A walk that we should have been able to do in a few hours on a quiet rainy day took significantly longer than that, due to the huge number of people standing, gawking and talking. I actually lost Mr. G on the Westminster Bridge in the sea of humanity, and had a few anxious moments being pushed along by the crowd before we managed to reconnect.

I thought it would be fun to document the day in pictures. So here goes, in order of operations. I didn’t want to schlep a big camera, so all pix taken with an iPhone. Imo, it’s a pretty nifty little camera… 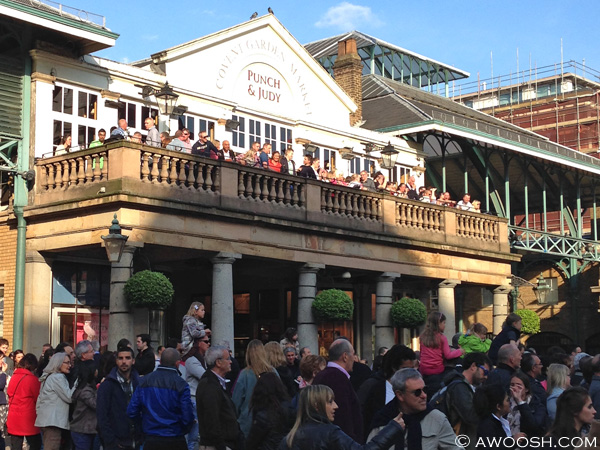 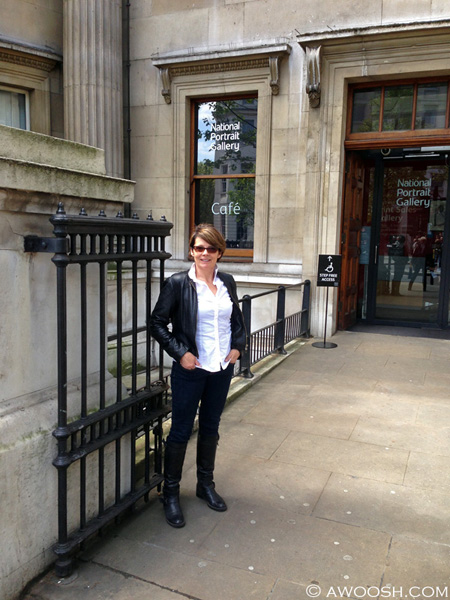 JG at the National Portrait Gallery at Trafalgar Square. 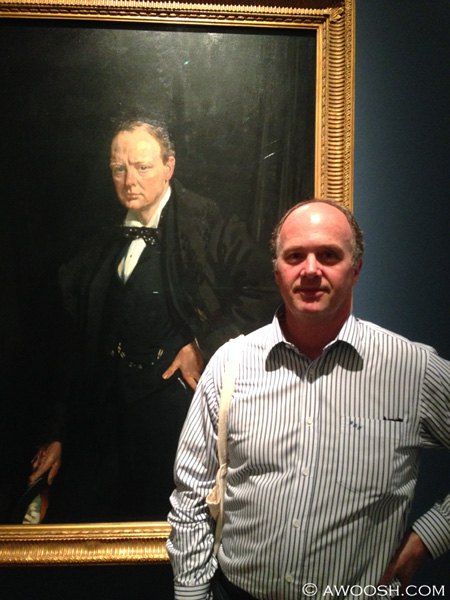 Mr. G emulating his hero (a young Winston Churchill) in the National Portrait Gallery. There was a temporary exhibit of photography from World War 1 – very interesting and compelling documentation of a terrible conflict. 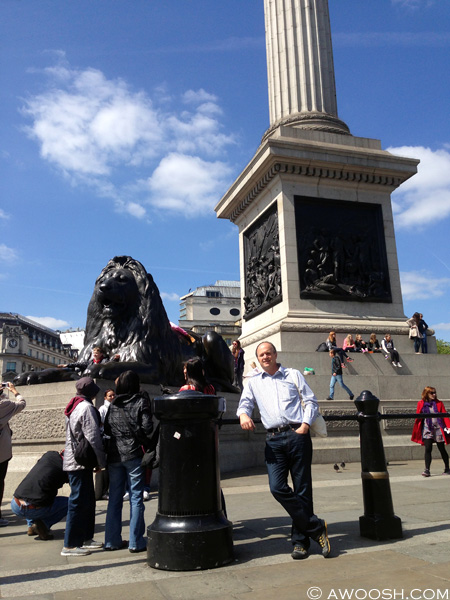 Mr. G lounging in front at Trafalgar Square at the base of Nelson’s (hero of the Battle of Trafalgar) Column. He’s already a bit weary as I dragged him through a portion of the National Gallery so I could see, yet again, the very emotive painting – The Execution of Lady Jane Grey, as well as the Van Gogh’s, Turners, and a few other faves. 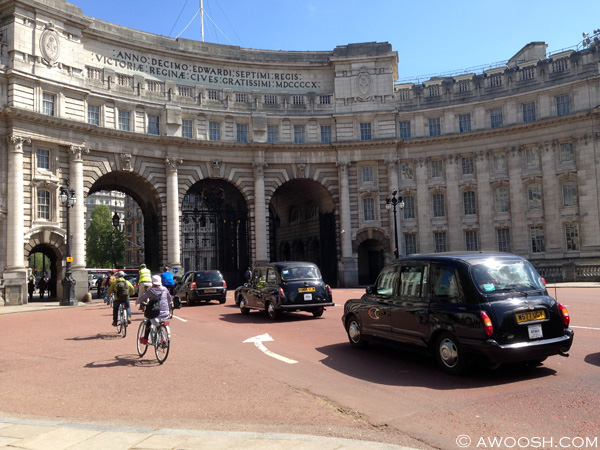 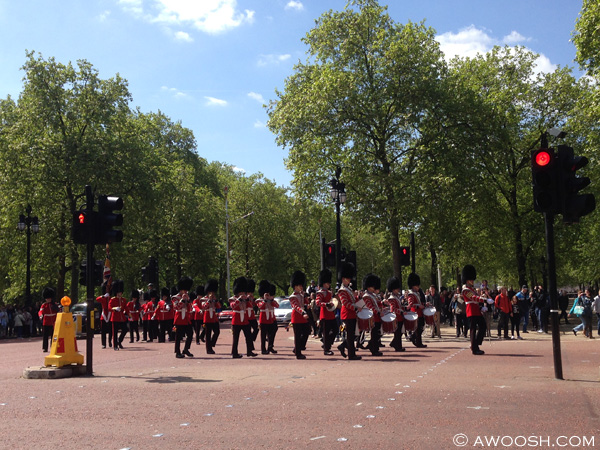 Timing is everything! We just missed the changing of the guard at Buckingham Palace (watched this day by tens of thousands of tourists), but caught them marching down the Mall back to their garrison. 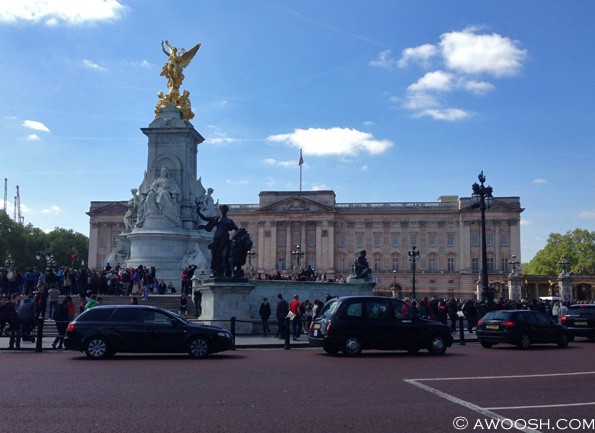 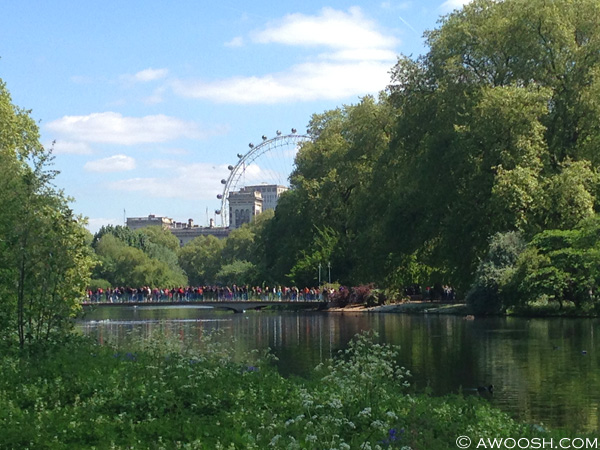 St. James’ Park, with a view through to the London Eye (the bigass ferris wheel in the distance). 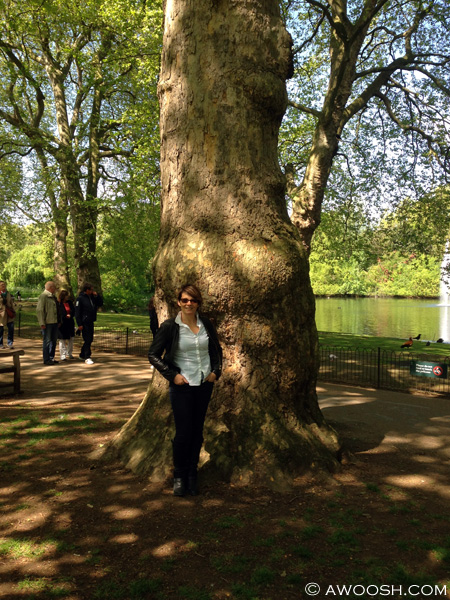 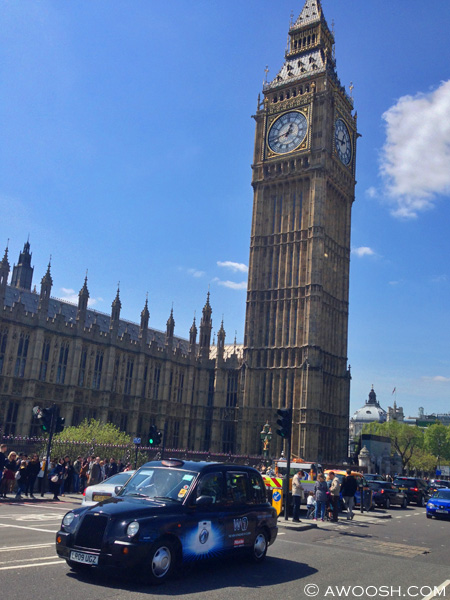 The iconic Big Ben (and Houses of Parliament adjacent to it). 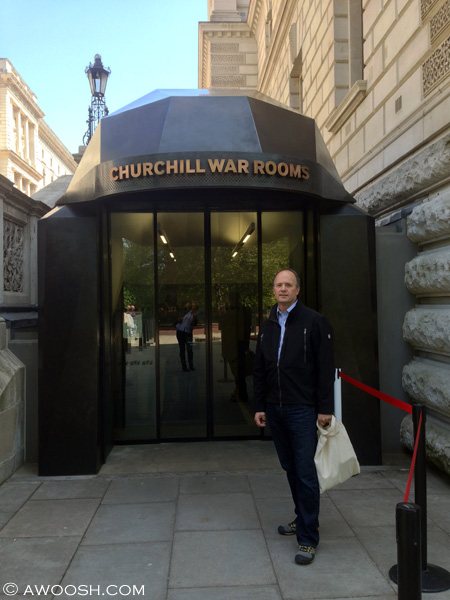 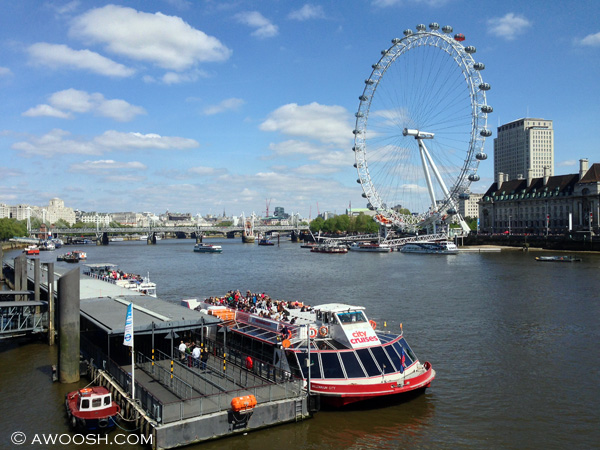 View of the Thames, London Eye, River Boats from the Westminster Bridge. 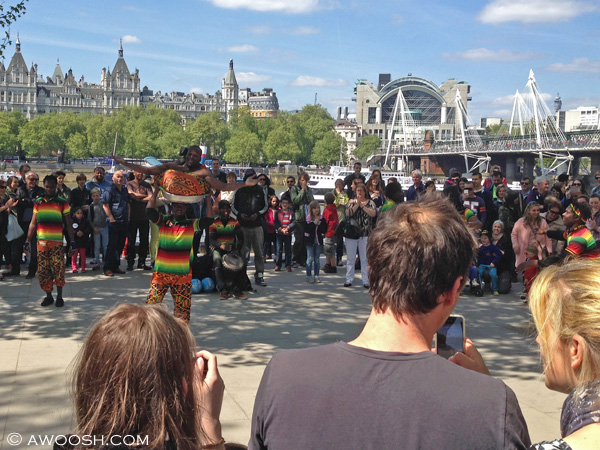 Crowds gathering for the many entertainers on the South bank. Golden Jubilee Bridge in the background. 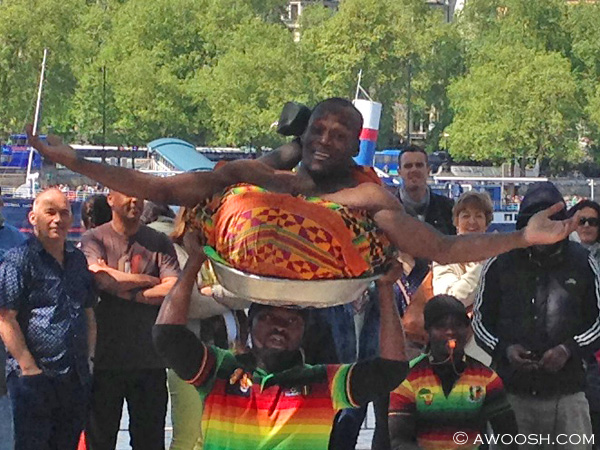 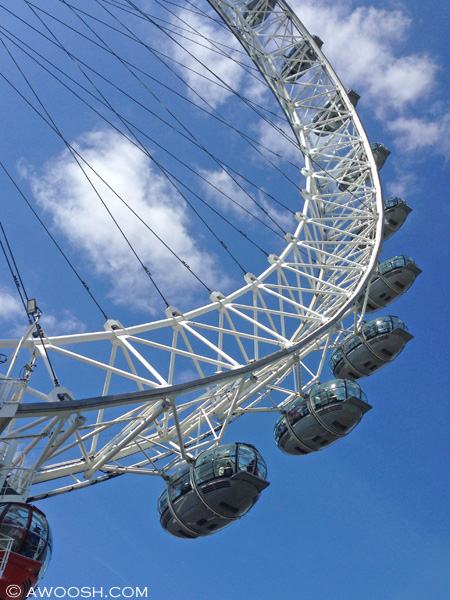 A look into the London Eye. Line ups for hours to take a ride, so we gave it a miss. 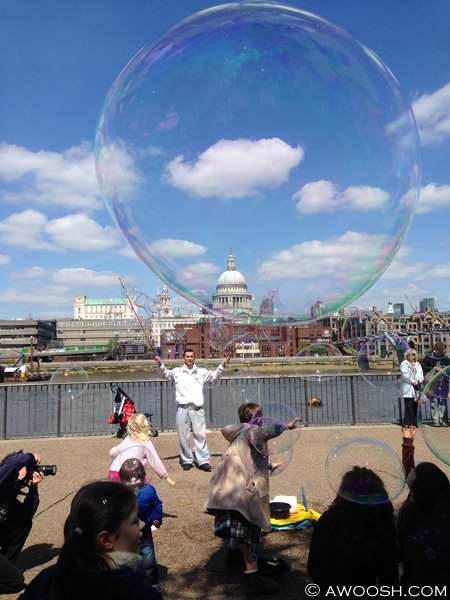 Major Bubbles – and St. Paul’s Cathedral in the background. 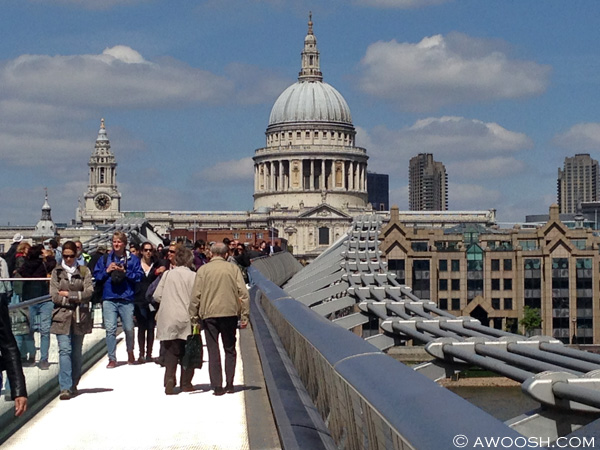 The Millennium footbridge that crosses the Thames from the Tate Modern Museum to St. Paul’s Cathedral. 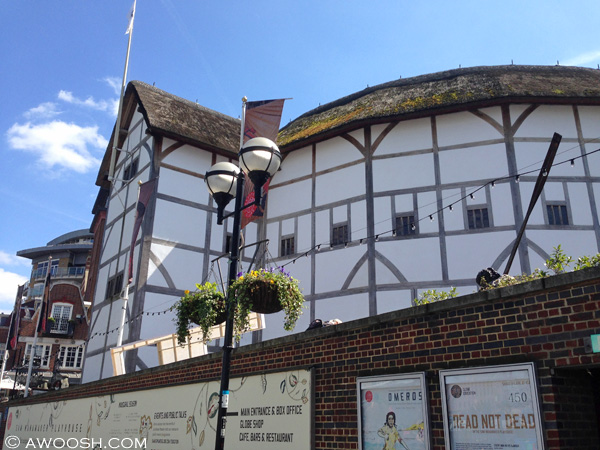 Shakespeare’s Globe Theatre in Southwark, on the south bank of the Thames. 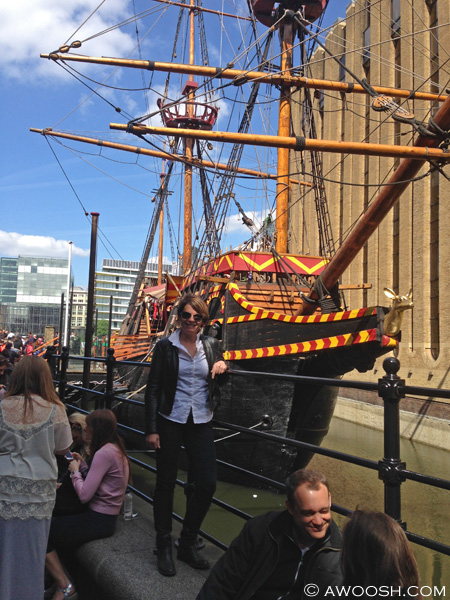 Replica of the Golden Hinde II – Sir Francis Drake’s Galleon – also on the (now very trendy) south bank. Shortly after this shot was taken we lucked out and found seats in a bar along the railing of the river where we quaffed a few cold ones and sucked in the views. 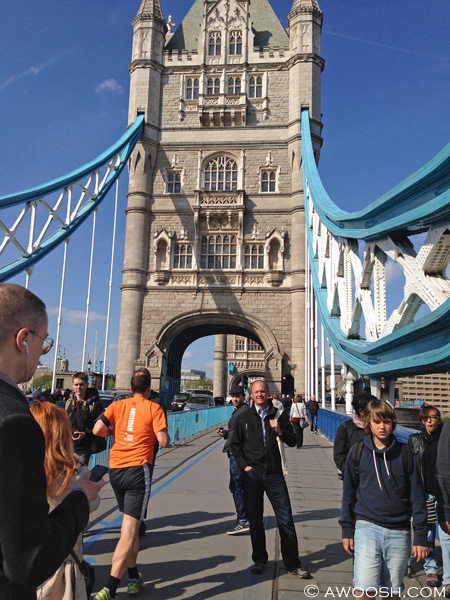 Mr. G on the Tower Bridge. 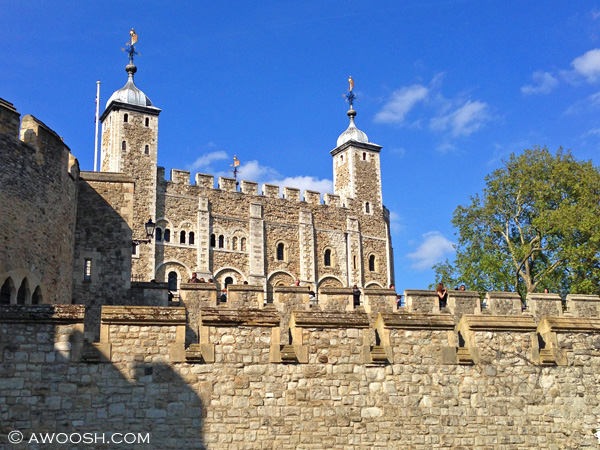 The Tower of London. We didn’t have time this day (again with the hoards of tourists), but we have toured here in the past, and it is totally worth the price of admission in our opinion. Fascinating history… 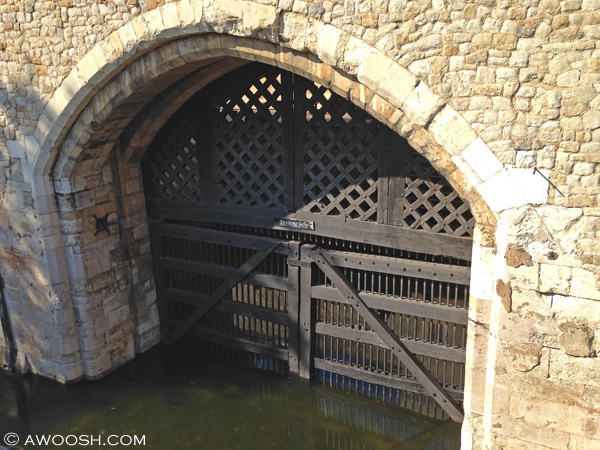 Traitor’s Gate at the Tower of London. 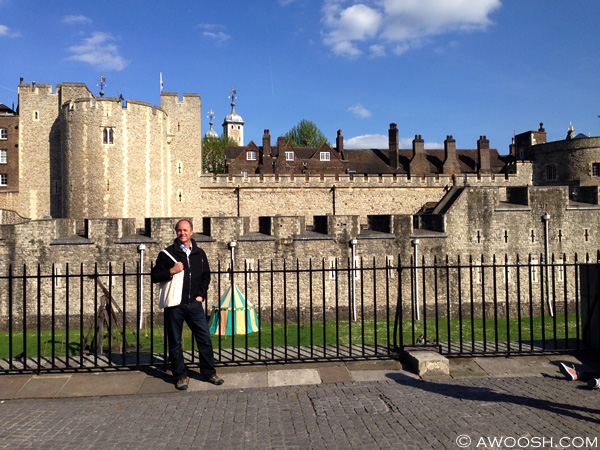 One more Tower of London view. It is a very large complex. 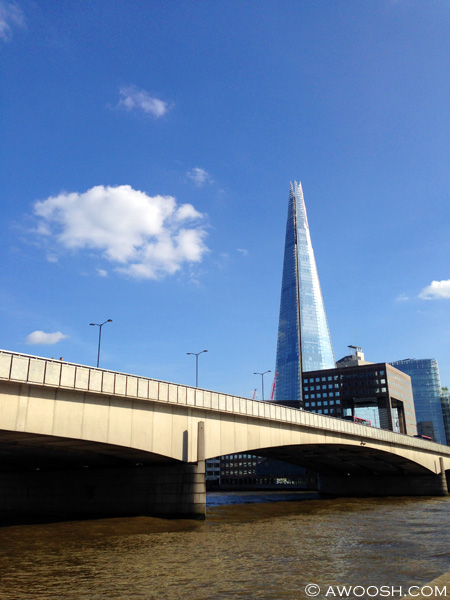 This is London Bridge. A bit of a disappointment after seeing some of the more beautiful structures that cross the Thames. The tall cone shaped building is a new addition to the skyscape since my last visit. Crazy architecture! 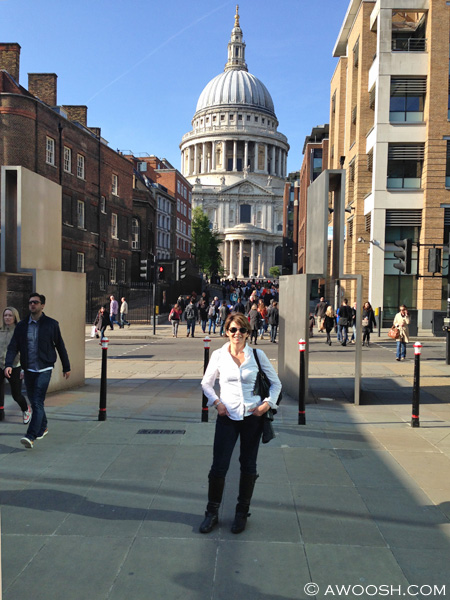 Whew! Are we done yet? Not quite. Now heading back up the river on the north side. JG in front of St. Paul’s Cathedral. This image is a bit of an optical illusion – St. Paul’s is massive… 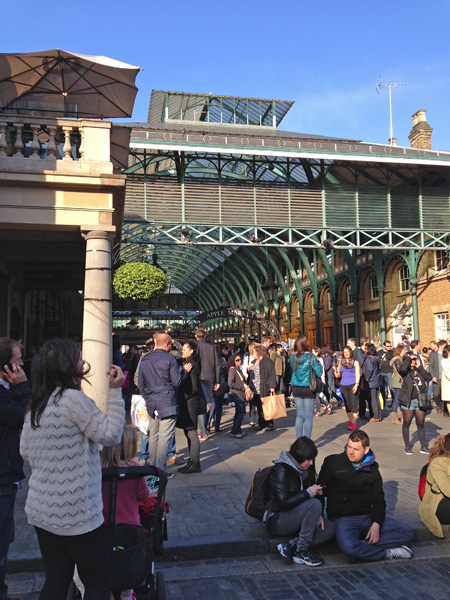 Okay, now we are done. Full circle back to Covent Garden.

After that, we really hoped we would be able to find a spot to rest our weary selves, have a drink and a bite to eat. But on a sunny Saturday evening, on a holiday weekend, in downtown London? We were dreaming. So we hopped back on the Tube, and headed back to the hotel at the airport, where, in its spacious, quiet bar, we noshed on Mediterranean nibblies and quaffed a cold one before hitting the sack.

Born and raised on the west coast of Canada, I have always felt a strong connection to the sea. But for many years, I stayed on the surface, afraid of what lurked down deep. When I was in my early 30's, with three young children (aka the P's), my husband (aka Mr G) signed us up for a SCUBA certification course, as a surprise. Although I had my fears, my stubbornness prevailed, and somehow I made it through four murky, frigid, cold water dives in Vancouver to successfully pass the course. Soon after we went diving off the west coast of Mexico, in the Sea of Cortez, where my eyes were opened to the beauty and other-worldliness of the life down under. And the rest, as they say, is history. I currently have well over 2000 dives under the belt, and I have been fortunate to travel extensively in Asia, Australia, Fiji, Galapagos, Costa Rica, California, the Caribbean, Mexico and here in British Columbia. After shooting hefty DSLRs for many years, I just switched over to a groovy Olympus Micro Four Thirds camera, in a Nauticam housing, with dual Sea & Sea strobes and a bag full of lenses. In addition to this blog and my personal website (Awoosh.com/Directory), which is linked at the top of the blog, my stuff has been widely published in a variety of magazines and websites, including an ongoing regular monthly feature on Scubadiving.com. All links to this work can be found in this blog.
View all posts by Judy G Diver →
This entry was posted in Photography, Travel, Trip Reports and tagged London, London Eye, St James Park, Tower of London. Bookmark the permalink.