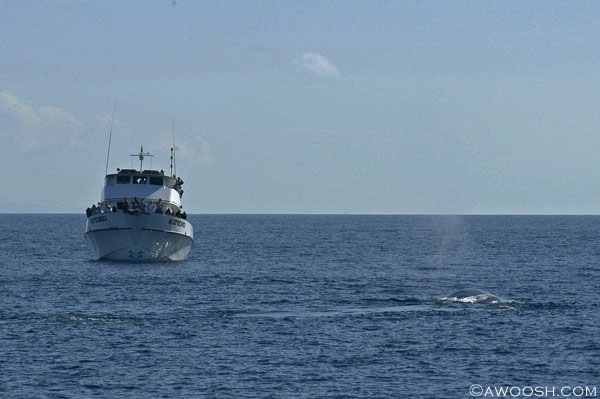 Blue Whale in the Channel Islands of California

Here is today’s thinking: why not dedicate Tuesday to be a “topside” image feature on the blog? I do occasionally share images that are not diving related, but for some reason I seem to gravitate more to stuff from under the surface.

I enjoy topside photography as well, especially landscapes, wildlife, and flowers. I will admit, that despite having worked hard to master lighting while shooting underwater, I am a neophyte at flash photography in air. Maybe something to focus on (ar, ar ;^) during these long, dry spells of no diving.

Anyhoo, here to start off what could be an on-going theme – a topside picture. This was taken on a dive trip to California – one of several that I have done over the past decade. There is lots of gorgeous scenery in the Channel Islands off the west coast (they are somewhat reminiscent of the Galapagos Islands), but I’ll begin this series with an image of the biggest animal on the planet – the Blue Whale (Balaenoptera musculus).

While not technically a great shot, I share it because it was a total thrill to see such a magnificent animal at close range. This whale can grow up to 30 metres in length (that is about 100 feet!). These huge mammals were almost hunted to extinction by the early 20th century. Thanks to conservation efforts worldwide, their population has slowly returned, but this animal is still categorized as endangered.

I’ve been fortunate to see a couple of different kinds of whales in my travels (and close to home here in British Columbia) – orcas and humpbacks. This was the only Blue I have seen thus far, and I feel very lucky to have had the opportunity.

To read more about Blue Whales, you can follow this link.

Born and raised on the west coast of Canada, I have always felt a strong connection to the sea. But for many years, I stayed on the surface, afraid of what lurked down deep. When I was in my early 30's, with three young children (aka the P's), my husband (aka Mr G) signed us up for a SCUBA certification course, as a surprise. Although I had my fears, my stubbornness prevailed, and somehow I made it through four murky, frigid, cold water dives in Vancouver to successfully pass the course. Soon after we went diving off the west coast of Mexico, in the Sea of Cortez, where my eyes were opened to the beauty and other-worldliness of the life down under. And the rest, as they say, is history. I currently have well over 2000 dives under the belt, and I have been fortunate to travel extensively in Asia, Australia, Fiji, Galapagos, Costa Rica, California, the Caribbean, Mexico and here in British Columbia. After shooting hefty DSLRs for many years, I just switched over to a groovy Olympus Micro Four Thirds camera, in a Nauticam housing, with dual Sea & Sea strobes and a bag full of lenses. In addition to this blog and my personal website (Awoosh.com/Directory), which is linked at the top of the blog, my stuff has been widely published in a variety of magazines and websites, including an ongoing regular monthly feature on Scubadiving.com. All links to this work can be found in this blog.
View all posts by Judy G Diver →
This entry was posted in Photography, Pic of the Day and tagged Blue Whale. Bookmark the permalink.