Pic of the Day – Stingray City 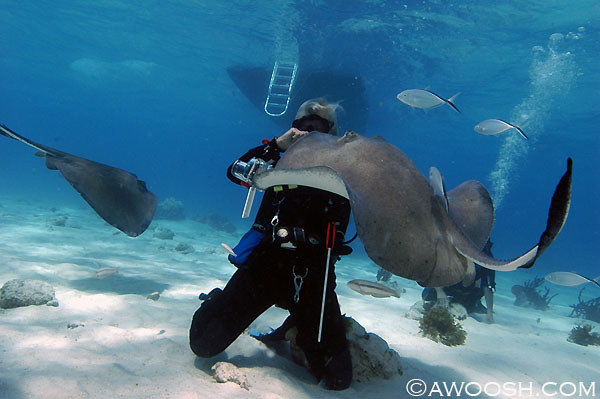 Here is an image from an iconic dive site in Grand Cayman. This is yet another of many trips where I never got around to writing up a trip report. My bad.

I was fortunate enough to be invited to GC to dive with my friend Cindy (aka Gunard) a few years ago. She is a wonderful, generous dive buddy and great photographer (she’s unbelievably good at spotting teensy things). Being semi-local (she spends several months a year in GC – lucky ducky), she really knows the sites. Even though she has done the “Stingray City” dive numerous times, she was kind enough to make sure we went there together.

Stingrays got a bad rap after the unfortunate demise of Steve Irwin aka the Crocodile Hunter. He was unlucky enough to take a tail strike to the chest, and it killed him.

The stingray has a barbed, venomous tail to protect it from predators, and it would appear that Steve was swimming closely above the ray, approaching from behind. In its own defence, the ray popped up its tail, and hit him near his heart. Sad for sure, but methinks it was unwise to be tailing a stingray in this way. When photographing them, I always try to approach from the front or side – never from behind.

These animals are very adept at burying themselves in the sand, where they lay in wait for prey to swim by. When something tasty comes in range, bam, they pounce. That being said, I have never heard of any other diver being hit by one of these animals – if anything, the challenge is to approach stealthily enough that they don’t spook and scoot. Most injuries sustained from stingrays are by people walking on sandy bottoms, where the rays are parked, and stepping on them. By all reports, it hurts like hell to get a spike in the foot, but it is not life threatening. Steve was just very, very unlucky that he took the hit to his chest.

Stingray City in Grand Cayman is home to many stingrays – they are fed squid bits by visiting boats, and have become quite tame in the process – so much so that, as you can see in the image above, they are very comfortable taking food from the hands of the pros who enjoy wrangling them. And wrangling is a good description – the whole dive feels like a bit of a rodeo, with the rays swooping in like stealth bombers, very close to divers, hoping to be fed.

I am still not sure how wise it is for us humans to be chumming the critters in the ocean – it creates an unnatural link in the food chain. This is especially true with shark dives. I’ve been on a few boats where, at certain sites, they chum the sharks. It is not unusual to see the sharks converge on the boat as soon as it pulls up to the mooring, like Pavlovian dogs responding to a bell. It’s all great to get the photo ops, but personally, I prefer more natural interactions and behaviour.

One more parting shot from Stingray City, which gives a sense of the action: 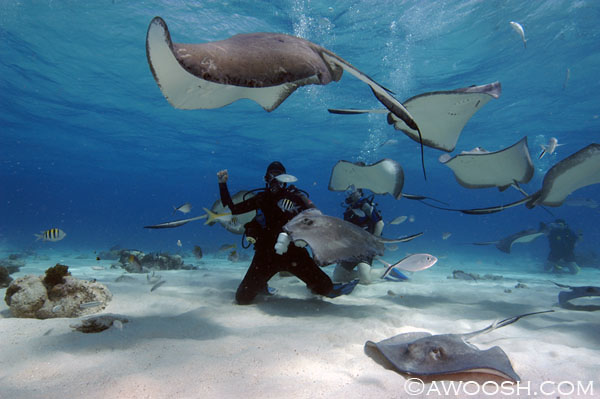 Born and raised on the west coast of Canada, I have always felt a strong connection to the sea. But for many years, I stayed on the surface, afraid of what lurked down deep. When I was in my early 30's, with three young children (aka the P's), my husband (aka Mr G) signed us up for a SCUBA certification course, as a surprise. Although I had my fears, my stubbornness prevailed, and somehow I made it through four murky, frigid, cold water dives in Vancouver to successfully pass the course. Soon after we went diving off the west coast of Mexico, in the Sea of Cortez, where my eyes were opened to the beauty and other-worldliness of the life down under. And the rest, as they say, is history. I currently have well over 2000 dives under the belt, and I have been fortunate to travel extensively in Asia, Australia, Fiji, Galapagos, Costa Rica, California, the Caribbean, Mexico and here in British Columbia. After shooting hefty DSLRs for many years, I just switched over to a groovy Olympus Micro Four Thirds camera, in a Nauticam housing, with dual Sea & Sea strobes and a bag full of lenses. In addition to this blog and my personal website (Awoosh.com/Directory), which is linked at the top of the blog, my stuff has been widely published in a variety of magazines and websites, including an ongoing regular monthly feature on Scubadiving.com. All links to this work can be found in this blog.
View all posts by Judy G Diver →
This entry was posted in All About Scuba Diving, Photography, Pic of the Day and tagged Dasyatis americana, Southern Stingray, Stingray City. Bookmark the permalink.