Pic of the Day – Digital vs Film 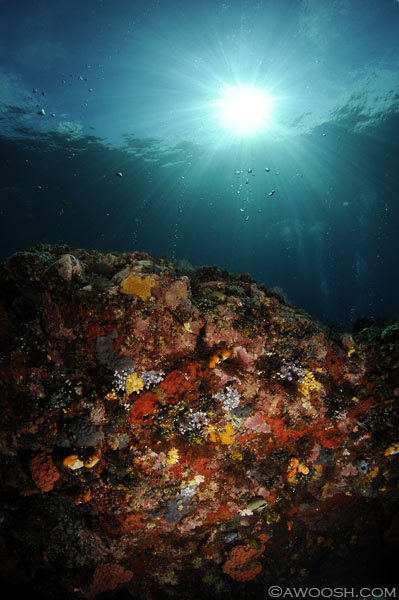 Sunburst Over The Reef – Indonesia.

As diving photographers, beauty is always in the eye of the beholder. The trick is to somehow translate the beauty that we perceive (real or imagined) into an image that “pops”, ie, that engages other viewers. Exposure, and composition, are the tools of the trade.

Correct exposure underwater takes some tweaking. Lighting of underwater subjects is usually needed (with the exception of moody shipwreck shots, silhouettes, and a few other specialized shots) – to highlight the beautiful colours – colours that may not be visible to the naked eye, without illumination, and to give depth and texture to the shot.  And lighting itself is complicated – some subjects (light coloured or shiny things) bounce light back at the camera, while dark things can suck up light, and can make it confounding to expose a dark subject on a light background successfully.  And I won’t even get into the aiming of strobes in this post – which is difficult, and essential to good imagery – I’ll save that for another day.

Without lighting, below the surface, colours are muted and less vibrant. I’ve been diving places (British Columbia is a good example), where, from a few feet off the reef, everything looks pretty dull and colourless in the usual low ambient light. Light it up, with a flashlight or a strobe, and the reef pops with crazy colours – purples, oranges, yellows, reds, etc. 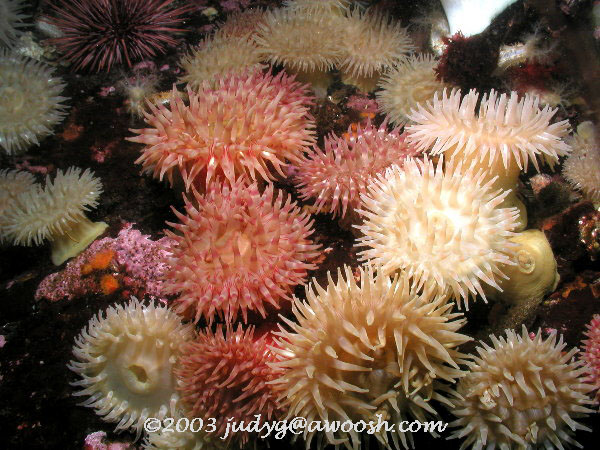 Water is dense stuff, and very quickly sucks the apparent pigment out of underwater features and creatures. Even bright sunlight becomes quickly diffused a few feet below the surface. The first colour to be significantly altered is red. Then orange, yellow, green, etc. The last colours that appear “truer” at depth are the shorter wavelength colours – blue and violet.

I have gotten some huge surprises when taking pictures of new (to me) creatures and stuff. I line it up with my viewfinder, compose the shot, and fire. Checking out the image that pops up in the review screen will often often reveal colours that were not apparent to me before I lit the subject as I took the picture.

The ability to immediately review the shot, thanks to digital media, is hugely helpful to all photographers. Seeing whether a shot is correctly exposed, and being able to get a sense of whether it is in focus or not, right after taking an image, is largely responsible for the massive amount of great imagery that is being produced these days.

In the old days, underwater photographers would shoot maximum 24 exposures on a dive (unless they were a pro and had a camera sherpa to carry second and even third rigs with them). They had to choose their subjects carefully, because of limited exposures available, and limit the number of exposures taken. Most good photographers knew their settings (aperture, shutter speed, strobe settings) cold. They had to – no taking a test shot, seeing that the image was correctly exposed, and then making whatever adjustments seemed necessary, and repeating, in some people’s cases, ad nauseum. [I have written previously about how some people will camp over a subject and take literally hundreds of frames, which, in my opinion, is not cool, particularly for light sensitive subjects].

Instead, film photographers would meter the subject (or the blue water behind it), select their settings, take their shot, and then, if possible, bracket one stop up and down from their original settings in the hopes of getting a perfect exposure.

Some places had E6 (film) processing available – so photographers could have their film developed the same day as they shot it. If they were lucky, they’d get a chance to shoot the same subject(s) again the next day, or sometime on their trip. Sometimes, it was a one trick pony – an interesting subject or scene that could not be revisited if the shots came out less than desired.

For many traveling photographers, they would shoot a bunch of rolls of film on a trip, then package them up and send it all away to be processed when they got home. It could be weeks from the time they took their shots to the time they got to see the outcome.

Film photography like this, when done well, was truly admirable.  There were only a few really great underwater photographers back in the film days, with many people aspiring to be even half as good with their efforts.  There were fewer still who worked the film dark room – cropping, burning and dodging, and altering exposure through film development.

These days, I see a lot of outstanding images being shared. There is some incredible talent out there in the world, and digital media has allowed many, many people (including me) to become pretty proficient in the art of underwater photography, and to widely share it.

I often tell people that if I had started with film photography underwater, I probably would have given up out of frustration.  Even starting with digital photography created a steep learning curve for me, as I had never received any formal training in photography – I was just an avid film amateur who mostly took portraits of our kids in my younger years.  It took me some time to figure out the relationship between, and effects of, aperture and shutter speed underwater, and to translate the images I saw in my head to the images that appeared on the screen.

I simply embrace continuous improvement as my goal. I don’t enter photo contents – with the exception of the Aggressor (free to enter) contest way back in 2004, when I was urged to do so by one of the dive masters on my Galapagos trip. I won a trip with that submitted image, which was groovy, and I am grateful for the encouragement to enter – I was a pretty new photographer at the time, and never could have imagined I could win anything with my neophyte attempts.

These days I can’t be bothered to wrangle images to submit.  It almost always costs money to enter (they have to get the prize money from somewhere), and if I chased all the opportunities, I could spend a small fortune in entry fees, with realistically very little chance of winning anything.

I also have a very marginal skillset in Photoshop, and I have become aware that being skilled in PS is almost as important as being a skilled photographer.  The digital darkroom offers up amazing opportunities for digital artists to manipulate their images to create something truly unique and outstanding, even from something that was less than perfect originally.  Personally, I am okay with that, and don’t feel that people should feel the need to reveal how much/little they manipulated an image, as long as they aren’t entering highly manipulated shots in contests that stipulate that digital manipulations must be minimal.

Most contests appear to have different categories these days, some of which encourage creative manipulation/composite images, and advertise them as such.  I think the trend towards photographers being required to submit their RAW images for contests is a great thing too.  I love seeing “pure” work, and it certainly highlights the skillset of the photographers who can taking stunning winning images, right out of the camera.

Speaking of right out of the camera – that is what I constantly aim for, with varying degrees of success.  These days I seem to come home from trips with a much larger percentage of keepers (to me that means properly exposed, in focus, not requiring cropping or other significant post production) than I did in my earlier days with a camera, and I am taking far less images of each subject or scene.  I think that means I might be improving at the craft.

But the biggest thrill I get from taking pictures?  It is still getting the shot I am planned for, right out of the box – no cropping, no exposure tweaks, no colour tweaks, no nuttin’ but applying my copyright and resizing for sharing on the internet: 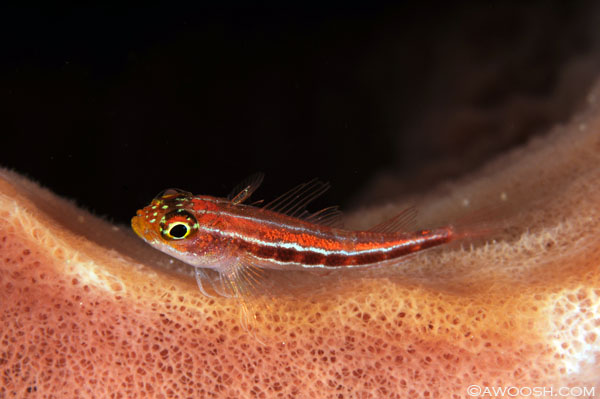 Born and raised on the west coast of Canada, I have always felt a strong connection to the sea. But for many years, I stayed on the surface, afraid of what lurked down deep. When I was in my early 30's, with three young children (aka the P's), my husband (aka Mr G) signed us up for a SCUBA certification course, as a surprise. Although I had my fears, my stubbornness prevailed, and somehow I made it through four murky, frigid, cold water dives in Vancouver to successfully pass the course. Soon after we went diving off the west coast of Mexico, in the Sea of Cortez, where my eyes were opened to the beauty and other-worldliness of the life down under. And the rest, as they say, is history. I currently have well over 2000 dives under the belt, and I have been fortunate to travel extensively in Asia, Australia, Fiji, Galapagos, Costa Rica, California, the Caribbean, Mexico and here in British Columbia. After shooting hefty DSLRs for many years, I just switched over to a groovy Olympus Micro Four Thirds camera, in a Nauticam housing, with dual Sea & Sea strobes and a bag full of lenses. In addition to this blog and my personal website (Awoosh.com/Directory), which is linked at the top of the blog, my stuff has been widely published in a variety of magazines and websites, including an ongoing regular monthly feature on Scubadiving.com. All links to this work can be found in this blog.
View all posts by Judy G Diver →
This entry was posted in All About Scuba Diving, Photography, Pic of the Day. Bookmark the permalink.