Pic of the Day – Mangroves 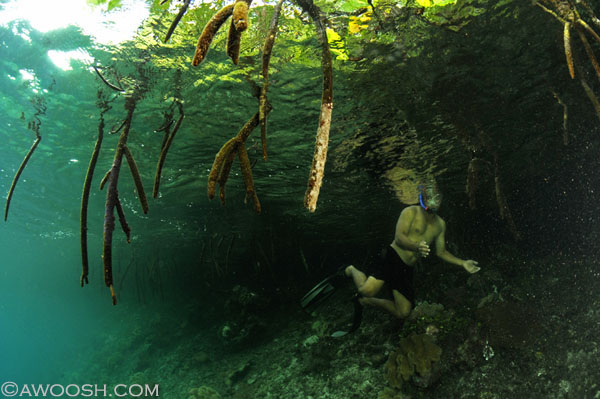 Every now and then, we divers are treated to surreal scenes. This was one of those times.

I have only had this one opportunity to dive in a mangrove. This is where trees grow, roots in the ocean. That’s right – trees growing in salty water. It makes your head hurt, just thinking about how that could be. The trees are specially adapted to exist in the high salinity of the ocean, and to somehow extract nutrition from a silty ocean floor.

This mangrove is in southern Raja Ampat (a group of islands in eastern Indonesia). A bit farther to the north is another beautiful mangrove, with bluer water, but in that one, salt water crocodiles are known to live. Much as that would be a cool photo opportunity, the risk of getting chomped is for real. Although we were told there had been no salties spotted in this large mangrove, I will admit that I was constantly scanning the area as I floated in the shallows, trying, unsuccessfully, to photograph groovy archer fish (which knock down their flying insect prey with a jet of water blown out of their mouths). Unsuccessfully, as I was shooting with a very wide angle lens, and they are pretty small fish ;^)

The mangrove is a bit of a nursery for juvenile critters. There are many places to take shelter from predators amongst the sinuous roots. There is also some coral growth, both hard and soft, along the periphery, which made it a pretty, though slightly scary, place to visit.

Coral bommie, in the jungle

Every picture tells a story, or at least that is what I am attempting to do in this photo blog. If you are enjoying the blog, I would love to hear from you with comments and/or suggestions for future content. And please, if you are groovin’ on it, ‘Like’ it’, ‘Tweet’ it, ‘Share’ it, and/or pass along a link to your buddies. Feel free to comment here (you do have to sign on – your e.mail will be visible to no one but me, and I have to moderate the comments as the spam that attempts to get dumped here is staggering), ping me on Facebook (Judy G Diver) or e.mail me (judygATawoosh.com).

Born and raised on the west coast of Canada, I have always felt a strong connection to the sea. But for many years, I stayed on the surface, afraid of what lurked down deep. When I was in my early 30's, with three young children (aka the P's), my husband (aka Mr G) signed us up for a SCUBA certification course, as a surprise. Although I had my fears, my stubbornness prevailed, and somehow I made it through four murky, frigid, cold water dives in Vancouver to successfully pass the course. Soon after we went diving off the west coast of Mexico, in the Sea of Cortez, where my eyes were opened to the beauty and other-worldliness of the life down under. And the rest, as they say, is history. I currently have well over 2000 dives under the belt, and I have been fortunate to travel extensively in Asia, Australia, Fiji, Galapagos, Costa Rica, California, the Caribbean, Mexico and here in British Columbia. After shooting hefty DSLRs for many years, I just switched over to a groovy Olympus Micro Four Thirds camera, in a Nauticam housing, with dual Sea & Sea strobes and a bag full of lenses. In addition to this blog and my personal website (Awoosh.com/Directory), which is linked at the top of the blog, my stuff has been widely published in a variety of magazines and websites, including an ongoing regular monthly feature on Scubadiving.com. All links to this work can be found in this blog.
View all posts by Judy G Diver →
This entry was posted in All About Scuba Diving, Pic of the Day and tagged indonesia, Mangrove, Raja Ampat. Bookmark the permalink.