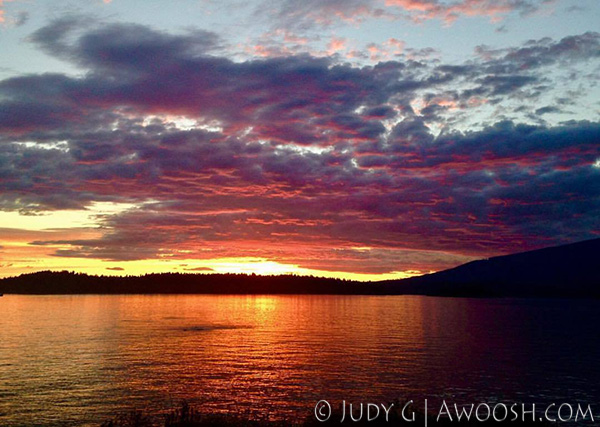 Yesterday was the much-anticipated solar eclipse. And although we live a bit north of the ‘zone of totality’, it was still a noteworthy happening. And amazingly, it was a clear sunny day for this extraordinary event.

I did not manage to get my paws on a pair of safety viewing glasses, so instead of risking blinding myself by squinting at the sun (as did the Great Orange One, caught for all posterity by the media ;^), I looked out to the horizon, and watched while the world seemed to still for a spell. The sea was glassy. Noisy sea birds went quiet. It was bright and sunny, and then it was not. It seemed as if someone had hit the mute button – not total darkness like those ‘in the zone’ experienced, and not like when a cloud covers the sun and shadows disappear, instead a strange, subdued, slightly unsettling light. And then, in just a short time, things went right back to normal. Taken a potty break, and you would have missed the show.

I did witness the eclipse in 1979. Again, Vancouver was just out of the path of totality. My memory of it is sketchy – so I suspect it was a cloudy day (as it often is in Vancouver, especially in February, when that one occurred). For whatever reason, it is not so imprinted on my memory.

A couple who are good friends of ours made the pilgrimage from LA to Oregon, to camp out with thousands of others, eager to witness the spectacle of totality. He described it as awesome. He said it awakened something primal in him; it moved him to tears.

We are so very small, in the grand scheme of things, aren’t we? These celestial events are a reminder of that. The rarity of the quotidian, nocturnal moon, crossing in front of the quotidian, diurnal sun, perfectly covering it for a few brief moments, is a thing of rare beauty, and awe.

I took the above photo last evening. It was just a quick snap with an iPhone, but it is a reminder of everyday miracles. The perfect fusion of clouds and sun low in the horizon that lights up the sky in these glorious, fleeting, awe-inspiring luminescences.

No wonder that ancient humans, and even some modern day ones, worship the sun.

Born and raised on the west coast of Canada, I have always felt a strong connection to the sea. But for many years, I stayed on the surface, afraid of what lurked down deep. When I was in my early 30's, with three young children (aka the P's), my husband (aka Mr G) signed us up for a SCUBA certification course, as a surprise. Although I had my fears, my stubbornness prevailed, and somehow I made it through four murky, frigid, cold water dives in Vancouver to successfully pass the course. Soon after we went diving off the west coast of Mexico, in the Sea of Cortez, where my eyes were opened to the beauty and other-worldliness of the life down under. And the rest, as they say, is history. I currently have well over 2000 dives under the belt, and I have been fortunate to travel extensively in Asia, Australia, Fiji, Galapagos, Costa Rica, California, the Caribbean, Mexico and here in British Columbia. After shooting hefty DSLRs for many years, I just switched over to a groovy Olympus Micro Four Thirds camera, in a Nauticam housing, with dual Sea & Sea strobes and a bag full of lenses. In addition to this blog and my personal website (Awoosh.com/Directory), which is linked at the top of the blog, my stuff has been widely published in a variety of magazines and websites, including an ongoing regular monthly feature on Scubadiving.com. All links to this work can be found in this blog.
View all posts by Judy G Diver →
This entry was posted in Photography, Pic of the Day, Writings. Bookmark the permalink.