Pic of the Day

While I am beavering away on the next installment of “My Favourite Places to Dive”, I thought I would toss another pic or two out there.

These two pictures are captures from my early days with an underwater camera (Olympus 4040z), and I share them, not because they are technically good pictures (far from it in fact), but because of the surreal subject matter.

This dive was at a location called Angelita Cenote, near Tulum on the Mayan Riviera (the east coast of Mexico).  The whole region is formed by limestone, and over the millenia (and various ice ages) parts of the peninsula have been both above and below water level. When it was above water level, rain water leeched down through the porous stone and created massive stalactites and stalagmites.

Many of these caves and caverns are now flooded with fresh water, and offer up some very groovy diving which is accessible to recreational level divers who are lead by certified cavern guides.  You wouldn’t want to be spelunking in these places on your own – it is way dark and very labyrinthine in many of the cenotes, and people can and do die with some frequency when they attempt this type of diving without adequate training or guidance. It is also not appropriate diving for newbies – you need to have excellent buoyancy control so as to avoid kicking up the fine silt in the cenotes, have a respectable air consumption rate, and you need to be in possession of a calm head that can handle being in a very dark overhead environment.

I’ve been diving in several of the cenotes in the area, but Angelita tops the list as the wildest I’ve done.  In this case, the roof of a huge underwater cave collapsed at some point, creating a large vertical shaft.  The cenote is deep enough and close enough to the ocean that the top 100 feet or so of water in the cenote is fresh, and beneath that, there is salt water all the way down into the abyss. Between the two layers of water there is a funky (and I do mean ripe) cloud of trapped gases from the trees that sank and decayed when the roof collapsed.

Sticking up out of the sulphurous cloud is the top of a pile of debris from the roof collapse, and several petrified trees.  It really plays with your head to be diving in a forest amongst the clouds. 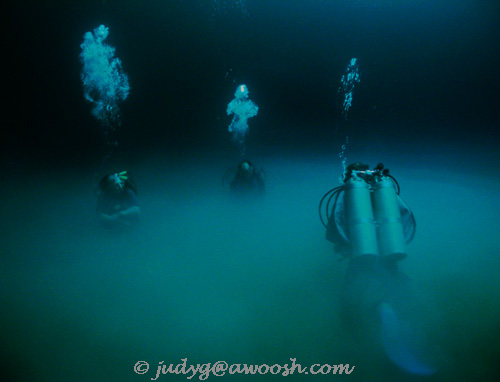 Below the cloud, it is pitch dark.  Ascending out of it, back into the light of a watery sun above was almost a religious experience.

To read more about this dive, and about recreational cavern diving in Mexico, feel free to follow this link —-> Cavern Diving in Mexico – Tripping the Dark Fantastic.

Born and raised on the west coast of Canada, I have always felt a strong connection to the sea. But for many years, I stayed on the surface, afraid of what lurked down deep. When I was in my early 30's, with three young children (aka the P's), my husband (aka Mr G) signed us up for a SCUBA certification course, as a surprise. Although I had my fears, my stubbornness prevailed, and somehow I made it through four murky, frigid, cold water dives in Vancouver to successfully pass the course. Soon after we went diving off the west coast of Mexico, in the Sea of Cortez, where my eyes were opened to the beauty and other-worldliness of the life down under. And the rest, as they say, is history. I currently have well over 2000 dives under the belt, and I have been fortunate to travel extensively in Asia, Australia, Fiji, Galapagos, Costa Rica, California, the Caribbean, Mexico and here in British Columbia. After shooting hefty DSLRs for many years, I just switched over to a groovy Olympus Micro Four Thirds camera, in a Nauticam housing, with dual Sea & Sea strobes and a bag full of lenses. In addition to this blog and my personal website (Awoosh.com/Directory), which is linked at the top of the blog, my stuff has been widely published in a variety of magazines and websites, including an ongoing regular monthly feature on Scubadiving.com. All links to this work can be found in this blog.
View all posts by Judy G Diver →
This entry was posted in All About Scuba Diving, Pic of the Day and tagged Angelita Cenote, Cavern Diving. Bookmark the permalink.