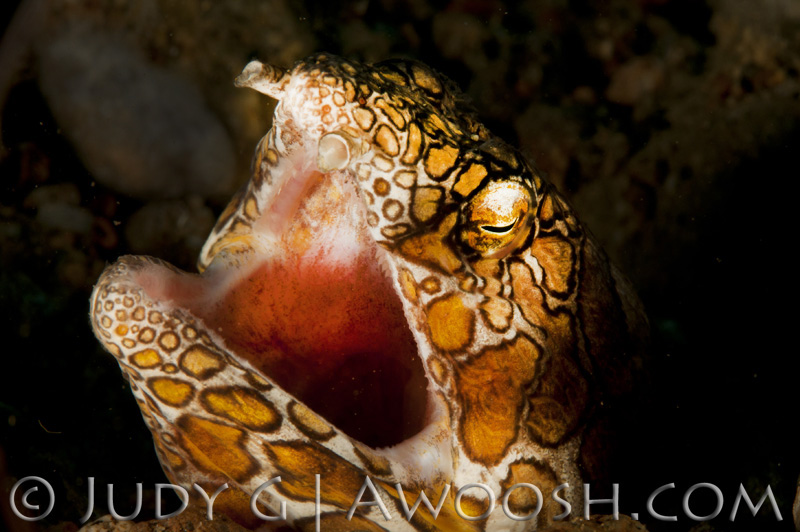 This is another shot I captured last Fall in the Philippines. On this part of the trip, we were still doing some land-based muck diving out of Atlantis Dumaguete Resort, before boarding the Atlantis Azores live aboard for a week of exploring and diving a portion of the southeast Philippines.

I actually found this thing on my own. These snake eels are ambush predators, and bury their long bodies in the silty bottom, with just their small heads poking out. At first glance, they look like a bit of rubble (the coloration and pattern really don’t pop until they are lit up), and they are usually very still (until they strike their prey), so it is easy to swim by without realizing what it is.

I was pretty jazzed about this find – I’ve only seen one of these Napoleon snake eels before (in Ambon, Indonesia), and that was found by a dive guide and then shown to everyone. When that happens, our group has a gentlediver’s agreement that we will not hog the subject – typically folks take two or three shots, and then move out of the way (taking care not to silt up the shot) to let the next photographer take a whack at it. There is always an option to go to the back of the line and reshoot, but oftentimes subjects have had enough of the paparazzi by then, and have receded into the reef or taken off. However, we have all agreed that when one of us finds something interesting ourselves, we should feel free to take our time, and then try to share the find with others. So I had a couple of minutes with this eel, but unfortunately, it was quite a strong current dive, and I had beat it up current, looking for stuff, so I had no one I could share it with. By the time I had drifted back to the group to get someone’a attention, and then swam back up into the current once more, I felt confident that I would not have been able to find it again.

So spotting this eel was a small miracle, mostly attributable to the lens replacement eye surgeries I had last May in which my crapped out old lenses in my eyes were swapped out for multi-focal, astigmatism correcting manufactured lenses. Even though this is common surgery these days (essentially cataract surgery), it was a pretty scary procedure for me – they actually have to cut your eye, pull the lens out, then insert another, plus in my case, rotate the lens so that the astigmatism correction was over the right part of my eye. They offer up half an Ativan as a sedative, which in my experience was not nearly enough drugs to make the procedure comfortable ;^) And as they only do one eye at a time, and I had three weeks between the surgeries, I spent most of a month not being able to read or comfortably watch tv. Looking back (ar, ar), it was all totally worth it.

The trip the Philippines was my first dive trip with my new and improved eyes, and I really loved being able to spot stuff myself, even quite tiny things. Previously, I had to look through a scuba mask with thick diopters, plus my adjusted camera diopter and macro lens to see anything small clearly. I did the reverse of the normal correction, in that I had my right eye adjusted for best near vision, as I am a right eye camera girl and wanted to be able to shoot small stuff with less of a work around.

Born and raised on the west coast of Canada, I have always felt a strong connection to the sea. But for many years, I stayed on the surface, afraid of what lurked down deep. When I was in my early 30's, with three young children (aka the P's), my husband (aka Mr G) signed us up for a SCUBA certification course, as a surprise. Although I had my fears, my stubbornness prevailed, and somehow I made it through four murky, frigid, cold water dives in Vancouver to successfully pass the course. Soon after we went diving off the west coast of Mexico, in the Sea of Cortez, where my eyes were opened to the beauty and other-worldliness of the life down under. And the rest, as they say, is history. I currently have well over 2000 dives under the belt, and I have been fortunate to travel extensively in Asia, Australia, Fiji, Galapagos, Costa Rica, California, the Caribbean, Mexico and here in British Columbia. After shooting hefty DSLRs for many years, I just switched over to a groovy Olympus Micro Four Thirds camera, in a Nauticam housing, with dual Sea & Sea strobes and a bag full of lenses. In addition to this blog and my personal website (Awoosh.com/Directory), which is linked at the top of the blog, my stuff has been widely published in a variety of magazines and websites, including an ongoing regular monthly feature on Scubadiving.com. All links to this work can be found in this blog.
View all posts by Judy G Diver →
This entry was posted in All About Scuba Diving, Photography, Pic of the Day and tagged Atlantis Dumaguete, Muck Diving Philippines, Napoleon Snake Eel. Bookmark the permalink.