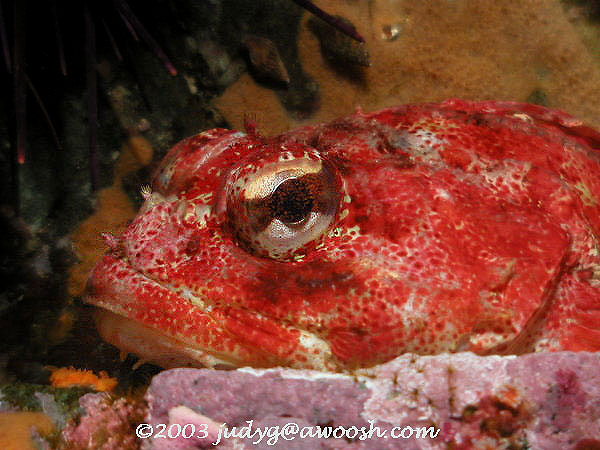 This brightly coloured fish, which can camouflage itself to blend into its environment, is a member of the Sculpin family. They can grow up to about a foot long – this one was smaller than that. I have seen very few of these fish, despite a significant number of cold water dives in my logbook. It is my understanding that they are not overly uncommon, but this is the only one that I have had the chance to photograph – way back in May 2003 when Mr G and I were diving on a Diverlink group trip to Dynamike’s, on Quadra Island.

The Red Irish Lord has fascinating eye details. And this type of fish is so confident in its camouflage that it will allow divers to make a close approach, if executed cautiously, so getting a good gander at the eye should be totally possible.

These were early days with an underwater camera (I started shooting in Summer of 2002). My first camera was an Olympus 4040Z digicam, in a clear plastic housing. By the time I took this shot, I had further challenged (and frustrated!) myself by adding an external single strobe (a workhorse Sea & Sea YS 90DX – that Mr G is still using!)

Using strobes (external flash sources) while diving is a confounding thing, due to the way light behaves underwater, which is quite different than when in air. There is also the issue of backscatter, which is all the particulate that is present in the water, and which can get lit up by the strobe, making for shots that look like they were taken in a blizzard. Up here in British Columbia, unless winter diving (when I’ve seen crystal clear viz as good as 90 feet), the water tends to be rich with plankton, and therefore murky. Working the strobe(s) so that they light up the subject but not all the spunk in the water is an art unto itself…

Looking back, I can see how I could have improved these images with better camera settings and lighting, but I still think they are not such terrible shots, considering I was pretty much a totally unschooled newbie to u/w photography (and Photoshop!) at the time they were taken. Not to mention I was wearing very thick cold water neoprene gloves, and diving in the dreaded 7 mm (non-compressed) neoprene drysuit (which took over 35 pounds of lead to sink!) – the cursed drysuit that my buds still tease me about because of the lurid pink and purple detailing. Fortunately, both the camera and the drysuit have gone through significant upgrades since then. 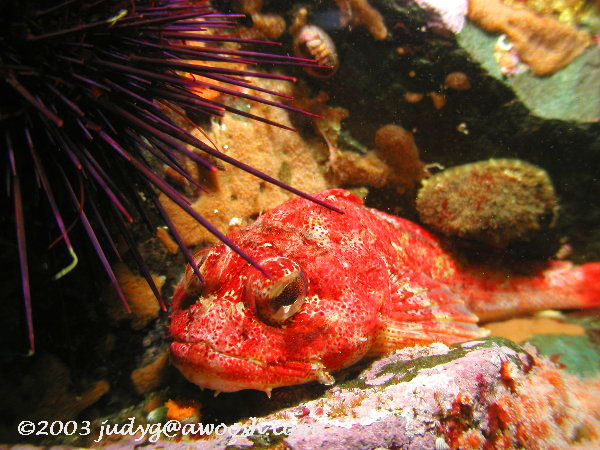 Born and raised on the west coast of Canada, I have always felt a strong connection to the sea. But for many years, I stayed on the surface, afraid of what lurked down deep. When I was in my early 30's, with three young children (aka the P's), my husband (aka Mr G) signed us up for a SCUBA certification course, as a surprise. Although I had my fears, my stubbornness prevailed, and somehow I made it through four murky, frigid, cold water dives in Vancouver to successfully pass the course. Soon after we went diving off the west coast of Mexico, in the Sea of Cortez, where my eyes were opened to the beauty and other-worldliness of the life down under. And the rest, as they say, is history. I currently have well over 2000 dives under the belt, and I have been fortunate to travel extensively in Asia, Australia, Fiji, Galapagos, Costa Rica, California, the Caribbean, Mexico and here in British Columbia. After shooting hefty DSLRs for many years, I just switched over to a groovy Olympus Micro Four Thirds camera, in a Nauticam housing, with dual Sea & Sea strobes and a bag full of lenses. In addition to this blog and my personal website (Awoosh.com/Directory), which is linked at the top of the blog, my stuff has been widely published in a variety of magazines and websites, including an ongoing regular monthly feature on Scubadiving.com. All links to this work can be found in this blog.
View all posts by Judy G Diver →
This entry was posted in All About Scuba Diving, Pic of the Day and tagged Hemilepidotus hemilepidotus, Red Irish Lord. Bookmark the permalink.