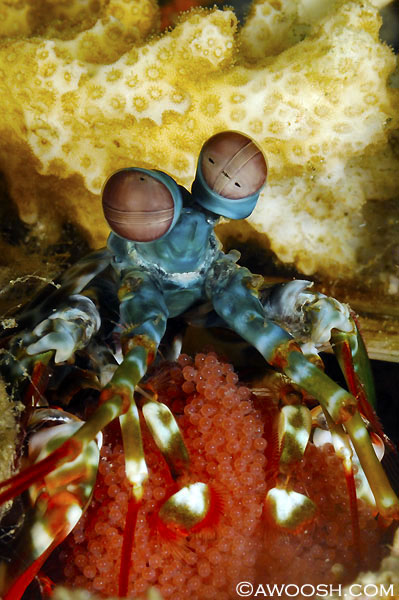 The Peacock Mantis Shrimp (Odontodactylus scyllarus) packs a heck of a punch. Equipped with a smashing claw – used for breaking shells to eat their inhabitants – these shrimp are more than capable of shattering the macro port of an underwater camera if they are so inclined. I think that with that lightening fast claw they could probably break bones in a human hand quite easily too.

So photographing these big shrimp (max about 7 inches in length) is not without its peril.

This particular shrimp was photographed in Ambon Harbour in Indonesia. Mantis Shrimp are not all that rare (but you’ve got to really look for them, as they tend to hole up in the reef, and will often completely disappear on approach), but seeing one with its clutch of eggs like this is pretty unusual. It was our bud Kiddoc who found this thing and showed it to me.  [Edited to give the correct critter credit – so Kiddoc showed the thing to me, but he has confessed that it was his eagle-eyed better half Amy who first spotted it]. This shrimp had the eggs balled up underneath it, and somehow could lift the mass up with it when it popped its head up out of its lair, and then very quickly would take the ball down the hatch with it when I approached too close for its comfort. It took some hanging out for a while for the shrimp to get used to my presence, so I could finally get the shot.

The Mantis Shrimp below was photographed on our recent trip to Komodo, Indonesia. This is more the regular kind of view you get of one of these critters. This guy was out on the reef, scurrying around, when I arrived on scene. He quickly dove into a hole, and again, I had to hang out for a while before he showed his face again. 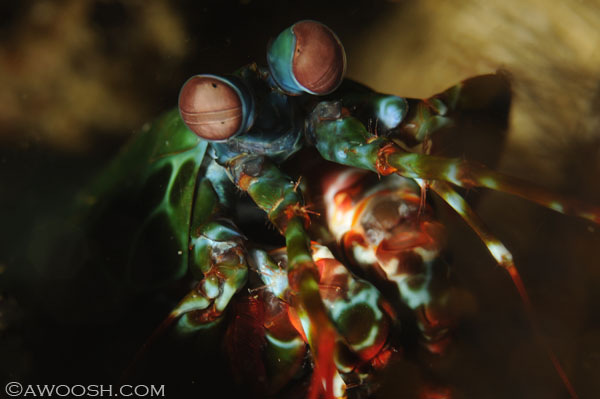 Born and raised on the west coast of Canada, I have always felt a strong connection to the sea. But for many years, I stayed on the surface, afraid of what lurked down deep. When I was in my early 30's, with three young children (aka the P's), my husband (aka Mr G) signed us up for a SCUBA certification course, as a surprise. Although I had my fears, my stubbornness prevailed, and somehow I made it through four murky, frigid, cold water dives in Vancouver to successfully pass the course. Soon after we went diving off the west coast of Mexico, in the Sea of Cortez, where my eyes were opened to the beauty and other-worldliness of the life down under. And the rest, as they say, is history. I currently have well over 2000 dives under the belt, and I have been fortunate to travel extensively in Asia, Australia, Fiji, Galapagos, Costa Rica, California, the Caribbean, Mexico and here in British Columbia. After shooting hefty DSLRs for many years, I just switched over to a groovy Olympus Micro Four Thirds camera, in a Nauticam housing, with dual Sea & Sea strobes and a bag full of lenses. In addition to this blog and my personal website (Awoosh.com/Directory), which is linked at the top of the blog, my stuff has been widely published in a variety of magazines and websites, including an ongoing regular monthly feature on Scubadiving.com. All links to this work can be found in this blog.
View all posts by Judy G Diver →
This entry was posted in All About Scuba Diving, Photography, Pic of the Day and tagged Mantis Shrimp Eggs, Odontodactylus scyllarus, Peacock Mantis Shrimp. Bookmark the permalink.

2 Responses to Pic of the Day – Peacock Mantis Shrimp