Pic of the Day – Hairy Frogfish 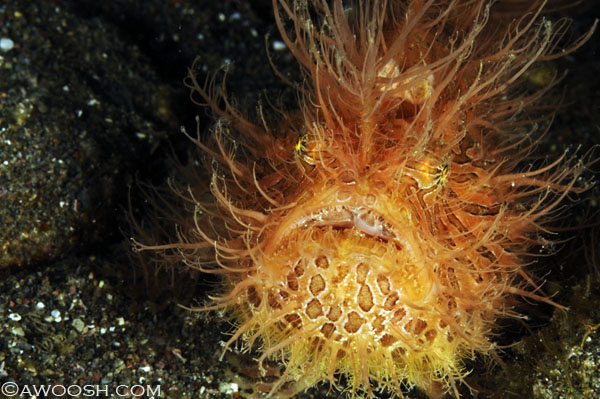 Now here is a fish you don’t see every day. This weird little frogfish (this one was about 4 inches long) was found on a night dive by eagle-eyed Wendy, one of our regular buddies. It was an awesome find, and what was even more special is that Wendy made a grand attempt to make sure that everyone who was diving that night had a chance to see it. Sweetness.

This dive was at a site called “Torpedo Alley”, in Horseshoe Bay on southern Rinca (pronounced Rin-Cha) island, in the Komodo region of Indonesia. A few years ago Torpedo Alley was named the top night dive site in the world by a major dive magazine. And it was a productive site when we dove it (in particular lots of unusual nudibranchs), although the enjoyment of the dive was marred somewhat by the huge clusters of bloodworms that came out after dark and swarmed our dive and focus lights (and our shots). For those readers old enough to remember, here’s an earworm (pun intended ;^) for ya – the worms crawl in, the worms crawl out… I was very glad I was wearing a hood so the little bastards couldn’t wiggle their way into my ears ;^)

I am not sure I would give Torpedo Alley the title of “Best Night Dive in the World”. I can think of at least two others I’ve done that I think trump it – the Manuelita night dive at Cocos Island, Costa Rica (marauding white tip sharks galore – truly a shark rodeo), and Laha at Ambon Island are both spectacular night dives.

Anyhoo, in the not too distant future, I will get to the Cannibal Rock/Horseshoe Bay/Torpedo Alley dives in my Komodo Chronicles photo blog, but for now, consider this hairy froggie a sneak preview.

Born and raised on the west coast of Canada, I have always felt a strong connection to the sea. But for many years, I stayed on the surface, afraid of what lurked down deep. When I was in my early 30's, with three young children (aka the P's), my husband (aka Mr G) signed us up for a SCUBA certification course, as a surprise. Although I had my fears, my stubbornness prevailed, and somehow I made it through four murky, frigid, cold water dives in Vancouver to successfully pass the course. Soon after we went diving off the west coast of Mexico, in the Sea of Cortez, where my eyes were opened to the beauty and other-worldliness of the life down under. And the rest, as they say, is history. I currently have well over 2000 dives under the belt, and I have been fortunate to travel extensively in Asia, Australia, Fiji, Galapagos, Costa Rica, California, the Caribbean, Mexico and here in British Columbia. After shooting hefty DSLRs for many years, I just switched over to a groovy Olympus Micro Four Thirds camera, in a Nauticam housing, with dual Sea & Sea strobes and a bag full of lenses. In addition to this blog and my personal website (Awoosh.com/Directory), which is linked at the top of the blog, my stuff has been widely published in a variety of magazines and websites, including an ongoing regular monthly feature on Scubadiving.com. All links to this work can be found in this blog.
View all posts by Judy G Diver →
This entry was posted in All About Scuba Diving, Photography, Pic of the Day and tagged Antennarius striatus, Hairy Frogfish, Torpedo Alley. Bookmark the permalink.