Pic of the Day – Hammerhead Shark 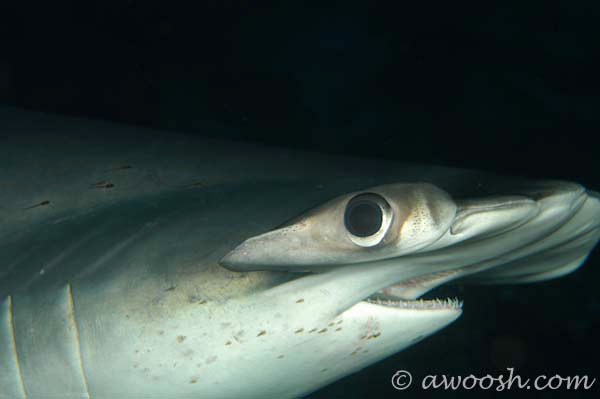 Today, I offer up a hammerhead shark as Pic of the Day, in honour of the recent CITES (Convention on International Trade in Endangered Species) conference decision, at which several species of sharks, including hammerheads, as well as much beloved manta rays, were deemed threatened, and placed on a protection list.

The issue was hotly debated at the CITES conference, with both China and Japan campaigning hard against any protection of the sharks. After all, that would mean the price of a bowl of soup would go up a bit…

The shortsightedness with which the world’s fishermen are pulling millions of sharks out of the water every year is staggering. The sharks are for the most part finned (alive!), with the body being thrown back into the sea, as the meat is not deemed profitable to market. But the fins? With which a (marginally nutritious) soup is concocted and served at astronomical prices per bowl as a sign of prestige and wealth? They are the hot commodity.

The CITES move is a good one, and useful for some sharp messaging to the shark fin fishing/trade/consumer communities, but I fear it may too late by the time any kind of meaningful enforcement can be put into place to protect these very threatened species. When fins are brought to market, it would seem to be a very difficult undertaking to even determine which species they are from, not to mention determining if the shark was caught “sustainably”.

To read more about this landmark decision, you can follow this link, and this one too.

Born and raised on the west coast of Canada, I have always felt a strong connection to the sea. But for many years, I stayed on the surface, afraid of what lurked down deep. When I was in my early 30's, with three young children (aka the P's), my husband (aka Mr G) signed us up for a SCUBA certification course, as a surprise. Although I had my fears, my stubbornness prevailed, and somehow I made it through four murky, frigid, cold water dives in Vancouver to successfully pass the course. Soon after we went diving off the west coast of Mexico, in the Sea of Cortez, where my eyes were opened to the beauty and other-worldliness of the life down under. And the rest, as they say, is history. I currently have well over 2000 dives under the belt, and I have been fortunate to travel extensively in Asia, Australia, Fiji, Galapagos, Costa Rica, California, the Caribbean, Mexico and here in British Columbia. After shooting hefty DSLRs for many years, I just switched over to a groovy Olympus Micro Four Thirds camera, in a Nauticam housing, with dual Sea & Sea strobes and a bag full of lenses. In addition to this blog and my personal website (Awoosh.com/Directory), which is linked at the top of the blog, my stuff has been widely published in a variety of magazines and websites, including an ongoing regular monthly feature on Scubadiving.com. All links to this work can be found in this blog.
View all posts by Judy G Diver →
This entry was posted in Photography, Pic of the Day and tagged CITES, Hammerhead Shark. Bookmark the permalink.