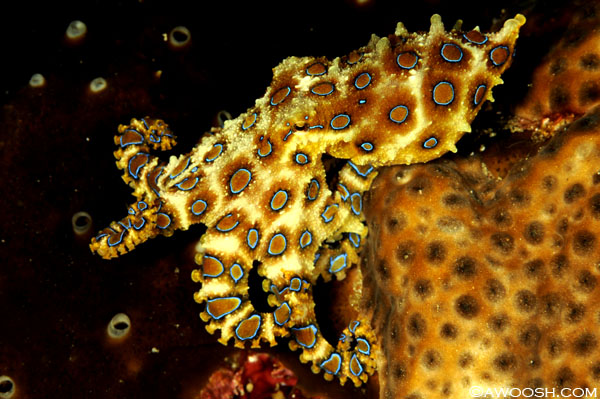 The Blue Ringed Octopus is a mecca for any Indo Pacific diver, especially photographers. But these little beauties pack a lethal punch – as one of the most dangerous animals in the ocean, one bite is capable of pretty quickly killing a human being.  It is said that the venom of one little octopus (they max out at about 6 inches long), is so lethal that it could kill several humans, cold.

I have seen some funny sh*t with octopi, including being stalked by a Giant Pacific Octopus (just call me ‘Sir’) in British Columbia, but none was funnier (in a schadenfreude kind of way) than watching Simon Buxton (a great photographer and now of NAD Resort Lembeh infamy) line up a shot of one of these little devils on a night dive in the Banda Sea, only to lose sight of the octopus as it lifted off and landed on his housing.  He dropped that thing like a hot potato, and was in a bit of a frenzy as he checked his head, hands and feet to make sure the little sucker wasn’t camping out on him.

The image above was shot on my most recent trip to Indonesia.  This one was out on the reef in the light of day, and was spotted by the eagle eyes of one of the other passengers on the Arenui.  Its bright blue rings are an indicator that it is highly agitated.  I was shooting a macro lens, so had to get in tight, but I kept a keen eye on the critter and made sure he stayed on the reef.

Born and raised on the west coast of Canada, I have always felt a strong connection to the sea. But for many years, I stayed on the surface, afraid of what lurked down deep. When I was in my early 30's, with three young children (aka the P's), my husband (aka Mr G) signed us up for a SCUBA certification course, as a surprise. Although I had my fears, my stubbornness prevailed, and somehow I made it through four murky, frigid, cold water dives in Vancouver to successfully pass the course. Soon after we went diving off the west coast of Mexico, in the Sea of Cortez, where my eyes were opened to the beauty and other-worldliness of the life down under. And the rest, as they say, is history. I currently have well over 2000 dives under the belt, and I have been fortunate to travel extensively in Asia, Australia, Fiji, Galapagos, Costa Rica, California, the Caribbean, Mexico and here in British Columbia. After shooting hefty DSLRs for many years, I just switched over to a groovy Olympus Micro Four Thirds camera, in a Nauticam housing, with dual Sea & Sea strobes and a bag full of lenses. In addition to this blog and my personal website (Awoosh.com/Directory), which is linked at the top of the blog, my stuff has been widely published in a variety of magazines and websites, including an ongoing regular monthly feature on Scubadiving.com. All links to this work can be found in this blog.
View all posts by Judy G Diver →
This entry was posted in All About Scuba Diving, Pic of the Day and tagged Blue Ringed Octopus, Hapalochlaena spp.. Bookmark the permalink.

One Response to Pic of the Day – Blue Ring Octopus