Zen and the Art of Scuba Diving 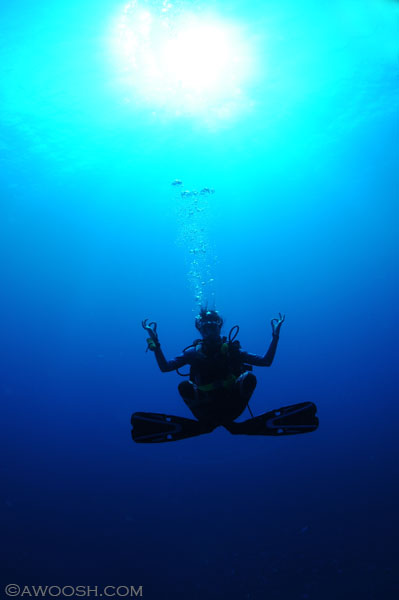 I have been practicing yoga quite a bit lately.  I will admit that I have had a bit of a love/hate relationship with it over the years.  Despite being fit for most of my life, I have some pretty tight muscles, and you can’t run and hide from those puppies on the yoga mat.

For many years I was a long distance runner, and for several of those years, when our kids were young, I also taught fitness.  All those activities led to tight hamstrings.  I was so busy chasing my tail (trying, somewhat unsuccessfully, to orchestrate a three ring circus – family, work and personal growth), that I was not diligent enough about taking the time to baby my muscles.  That neglect eventually caught up with me, and I can no longer run due to chronic piriformis inflammation.  It’s a bit of a bummer, but when the door to running closed, another one to yoga opened.

Some people might label me Type A.  I’d like to believe that I am a little less intense than that, and I sincerely hope that I have mellowed a bit as I have evolved.  You really get to know yourself on the mat, and I have learned that although I practice yoga with good intentions (to maintain physical and mental well-being), I really struggle with discomfort, and I have to work hard at breathing through it, rather than trying to avoid it altogether. You also learn to get over yourself already – no one is watching you, except you.

I for sure have a strong sense of purpose in my life.  It is why I have been writing and taking pictures for a long time. My intention has always been to share (experience, information, beauty), and it is incredible to be alive in a time when channels are open to share one’s stuff with such ease of deilvery.

I know I am very, very fortunate to be leading the life I am.  Mr G and I have worked hard for it, but we don’t ever forget that we were also born under lucky stars of opportunity. I have also already had two near misses with death – one a massive post-partum hemorrhage after the birth of P3, and the other an incident on my motorcycle (after which I hung up my chaps). Those hugely formative experiences, along with so many others in my life, have led me to a place where I just try to live in the now. Life is short, and you never know when it will be over.

It may seem a reach to find a parallel between scuba diving and yoga, but for me, there is definitely a link.  I know that yoga, and the practice of rhythmic deep breathing that is an integral part of it, is fantastic for my air consumption (or lack thereof) while diving.  I am pretty good on a tank (my personal best is 2+ hours on a shallowish muck dive in Indonesia).  In current or in deeper water I for sure consume at a greater rate, but the slow inhalations and exhalations allow me to “sip” the air, and balancing the length of the inhales with the length of the exhales definitely leads to a calming of the mind and the body.  I’ve been known to blow through a tank while flitting around in current trying to take pix of some elusive critter, but generally I am one of the last ones up at the end of a dive.

In yoga, I tend to shut down my vision (I don’t wear my glasses to practice so everything is an impressionist painting anyway ;^), and I find I tune in more to my body.  In diving I shut down my hearing (it is so quiet down under anyway) and I find that I become highly visual.

Listening to your breath, being aware when you are breathing with exertion, and slowing everything down to get back into the sweet cadence of deep, rhythmic breathing – that is the key.  Air consumption should not be a contest, but it is nice not feeling like an air pig, and it is great to know that, with practice, you can control your breath, calm your mind, and get the most out of your tank of air.

PS – I recently confessed to breath-holding while taking pictures of hammerhead sharks in Costa Rica, but I don’t want to give the impression that I recommend that anyone should hold their breath while diving.  It is especially critical that breath is not held anytime there is a change in depth.  You can blow out your lungs pretty easily by ascending even 10 feet with a chest full of trapped air. When I inhibited my breathing, I was hunkered down between some rocks at the edge of the reef – there was no exertion on my part, just layin’ in the weeds waiting for hammerheads to swim by.  I also had somewhere around a thousand dives when I did that trip, in a lot of challenging conditions, and I was very physically fit.

Born and raised on the west coast of Canada, I have always felt a strong connection to the sea. But for many years, I stayed on the surface, afraid of what lurked down deep. When I was in my early 30's, with three young children (aka the P's), my husband (aka Mr G) signed us up for a SCUBA certification course, as a surprise. Although I had my fears, my stubbornness prevailed, and somehow I made it through four murky, frigid, cold water dives in Vancouver to successfully pass the course. Soon after we went diving off the west coast of Mexico, in the Sea of Cortez, where my eyes were opened to the beauty and other-worldliness of the life down under. And the rest, as they say, is history. I currently have well over 2000 dives under the belt, and I have been fortunate to travel extensively in Asia, Australia, Fiji, Galapagos, Costa Rica, California, the Caribbean, Mexico and here in British Columbia. After shooting hefty DSLRs for many years, I just switched over to a groovy Olympus Micro Four Thirds camera, in a Nauticam housing, with dual Sea & Sea strobes and a bag full of lenses. In addition to this blog and my personal website (Awoosh.com/Directory), which is linked at the top of the blog, my stuff has been widely published in a variety of magazines and websites, including an ongoing regular monthly feature on Scubadiving.com. All links to this work can be found in this blog.
View all posts by Judy G Diver →
This entry was posted in All About Scuba Diving, Yoga and tagged scuba breathing, yoga. Bookmark the permalink.

2 Responses to Zen and the Art of Scuba Diving